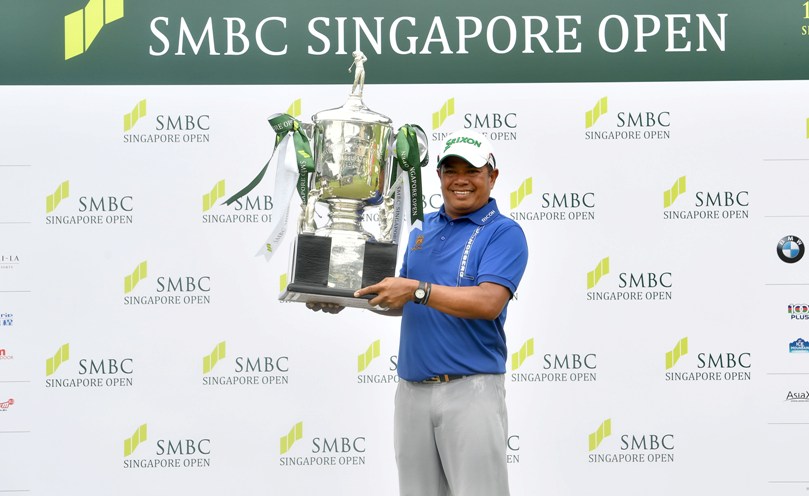 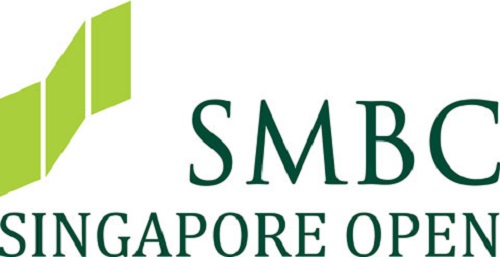 Thailand’s Prayad Marksaeng received his early birthday present when he eclipsed his younger rivals with a final round four-under-par 67 to lift his 10th Asian Tour title at the SMBC Singapore Open on Sunday.

The Thai turns 51 in eight days and with the iconic Singapore showpiece celebrating its 51st edition this year, it was perhaps appropriate its next winner would also be born in the year the event was inaugurated.

Prayad’s closing birdie on 18 proved decisive as it gave him a one-shot advantage and also the clubhouse lead while the rest of the field were still out at the Sentosa Golf Club trying to pip him to the title.

Prayad was eventually crowned the newest SMBC Singapore Open champion after a two-hour wait as no one in the chasing pack was able to surmount their challenge and better his four-day total of nine-under-par 275.

Thailand’s Phachara Khongwatmai, South Africa’s Jbe Kruger, Philippines Juvic Pagunsan and defending champion Younghan Song of Korea all had their chances to pip or at least force a play-off with Prayad but that crucial putt in their closing holes simply eluded all of them.

The quartet all finished one shot back of Prayad and shared second place with their 276 total. World number seven Adam Scott had a round to forget as he signed off with a 74 to finish tied for ninth while Singapore’s Quincy Quek emerged as the best placed Singaporean in tied-26th place.

Prayad is the second oldest winner on the Asian Tour at 50 years and 357 days.

He is currently the third player after compatriots Thaworn Wiratchant (18) and Thongchai Jaidee (10) to hold the most number of win on the Asian Tour.

In 2016, Prayad claimed three top-15s and one top-10 on the Asian Tour. He also won four times on the Japan Senior Tour.

Prayad together with Jbe Kruger, Younghan Song and Phachara Khongwatmai are the four players who have earned their place in The 146th Open at Royal Birkdale from 16-23 July 2017.

Philippines’ Juvic Pagunsan missed out on his place to Jbe Kruger because of his lower ranking in the Official World Golf Ranking (OWGR).

I waited in the clubhouse for about two hours before I knew I won the tournament. I felt very relaxed, didn’t think too much and just went for my lunch. I watched how the other players played on TV too. I told myself I didn’t need to feel nervous as I have already finished my round. If it belongs to me, it belongs to me.

I am turning 51 on the 30th of January. This will be the best birthday present for me. I am very happy with my birdie on the last. It was a really long putt, about seven feet. I am glad I made it. I am happy that I managed to finish my round before the rain suspension. I don’t like having to wait for play to resume actually. It’s too slow for me. I like to play fast.

Last year I played in the same group as Jordan Spieth and I had to return on Monday to finish my putt as well. However, I missed my par putt and settled for bogey on the last, signing for a 76 to finish in tied-49th position. It’s definitely much better for me this year.

This is my first year playing on the Asian Tour with a full card. Playing in my first event of the year, I am extremely pleased with my top-five result. I am happy with how I finished the round.

It has been a tough week with the rain delays and all. My short game wasn’t as good today but I am happy with my even-par score. I didn’t think about winning. I just stay focused on my game. I am playing against myself, not other players.

The conditions were not so great today but I gave myself some opportunities out there. Unfortunately I missed the opportunity on the last to force a play-off. But it’s alright. I only felt the pressure one day before the tournament started actually.

I think I handled the pressure well. I learnt a lot from this week. I am happy with my result still and hopefully I can bring forward my good form into Myanmar next week.

It’s amazing. I think this is the best tied-runner-up position that I have ever had. I am very excited to play in The Open this July. It will be my second time. I last played The Open in 2012.

It’s always a miracle week here in Singapore. I love this course and it’s definitely inside my top-three list of golf courses in the world. It’s one of those courses that you have to play well from tee to green. I tried my best and didn’t think much about winning. I haven’t been striking the ball well for the last couple of weeks.

I came so close again at the Singapore Open. I missed an opportunity on the 16th hole. I missed it on the right side and it was a big mistake. I bogeyed 12 and 13. Those were tough holes. I made mistakes with my tee shots as well.

I gave myself some chances but I had a couple of bad swings on 15 obviously. I will take about three weeks off before playing in the United States. It’s great to come back to play in Singapore this week. The course is looking so good. I thoroughly enjoyed it. It was lovely putting on these beautiful greens.

Leading Scores after round 4 of the SMBC Singapore Open being played at the par 71, 7398 Yards Sentosa GC course (am – denotes amateur):