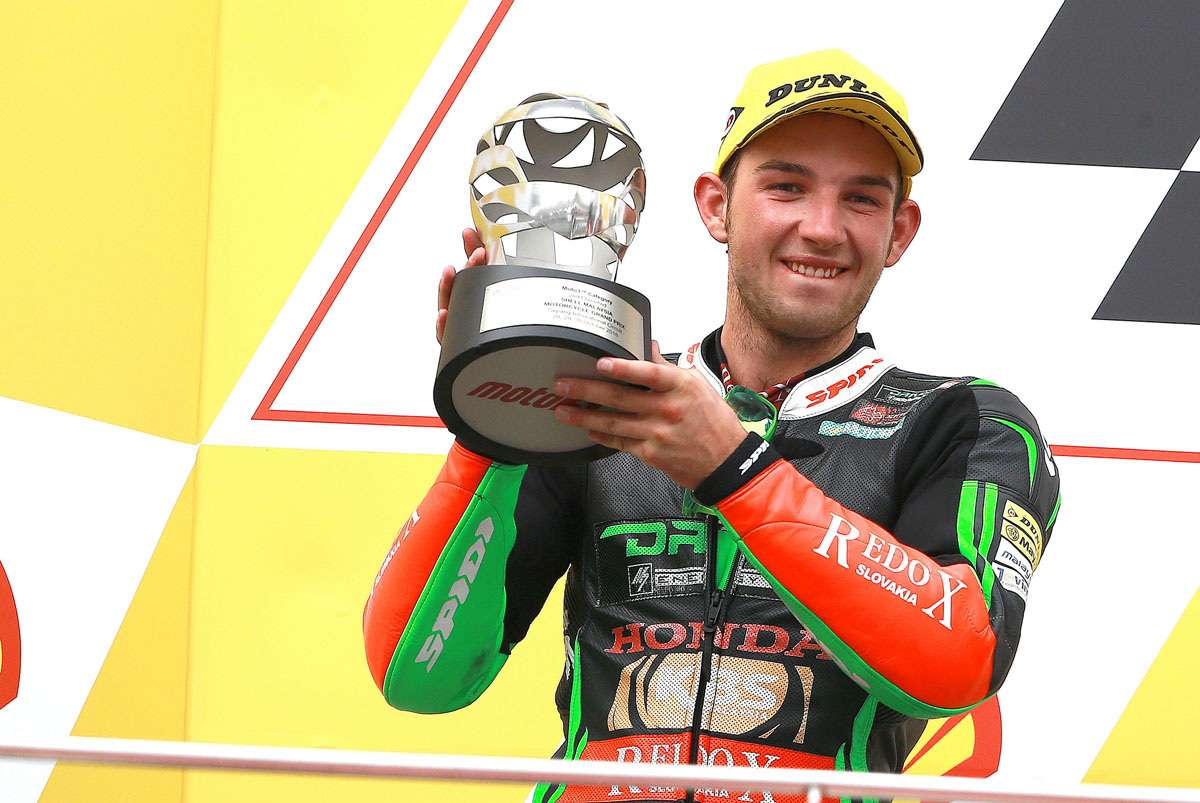 Today the Malaysian Grand Prix saw DRIVE M7 SIC Racing Team rider Jakub Kornfeil achieve an outstanding 2nd place finish in front of the teams home crowd, at Sepang International Circuit. Having rode an exceptional race in challenging conditions and well worthy of a podium finish, Kornfeil heads to the final round of the year adding twenty more points to his Championship tally and elevating his position to eighth overall.

Despite making a good start, Malaysian Moto3 rookie Adam Norrodin was caught up in the drama at turn six that saw four fellow riders fall. Quickly remounting his #7 machine, the eighteen year old attempted to re-join the race but with oil on his tyre immediately crashed out again at the following turn. Determined not to give up, Norrodin tirelessly attempted to re-mount for a third time, but was forced to retire due to the damage on his bike.

Johan Stigefelt – Team Manager
“We knew both Jakub and Adam had a good pace in the dry, so we were feeling confident at the start of the race. On the first lap there was a lot of incidents but Jakub got through them because he was pushing hard and being aggressive through the corners, so he was able to get up to the front quickly and avoid them. Unfortunately Adam who was further behind got caught up in the incident and although he managed to avoid the crash itself, as he passed through, something hit his bike coming out of turn six and he crashed out. I feel really sorry for Adam because he was really looking forward to this race and I know he would have given it his everything.
Jakub did a great race today in tough conditions; the grip was nowhere near like yesterday in FP3 and he struggled. There were wet patches around the track and he had to basically ride around them and that was experience talking. He did well, stayed out of trouble and rode it home to a great second place for us. It’s fantastic to do this at our home track and we are very happy.”

#84 Jakub Kornfeil – P2
“This is my best career finish in Moto3 and the feeling is amazing! I don’t think it has completely sunk in yet; it still feels like a dream. It was a very difficult race; there was no grip in the tyre. The most important thing was to stay on the bike, study the track because it was changing every lap and be careful to avoid the wet patches. I want to say huge thanks to my team and to SIC [Sepang International Circuit] and all my sponsors and family. Without them I couldn’t do this! I want to dedicate this second place to them. For me this result means a lot; the first podium of the year is always special and especially at the home GP of my team; it’s incredible! To go back home with twenty points is fantastic.”

#7 Adam Norrodin – DNF
“I’m so sorry for the team, sponsors, Sepang Circuit and my family who travelled from so far away. I’m so disappointed with the race today. I was really looking forward to today; I was so excited to race in front of my home crowd. The beginning of the race was not too bad and I gained one position, but then in turn two there was a crash; I stayed calm but then in turn six another big crash happened. In front of me it was clear but then as I was exiting the corner, I think there was something from the crash on the asphalt that hit the bike. I immediately lost it and crashed out. I picked the bike up and remounted but then in the very next corner I crashed again (I think to do with the damage to my bike). Again I got back on and tried to re-join the race, but something didn’t feel right. As I went down the back straight the engine just went and I had no choice but to retire. I’m so disappointed because I feel confident that I could have done well here. Now I just have to focus on the last race of the season at Valencia; I want to end my first year in Moto3 with a good result.”