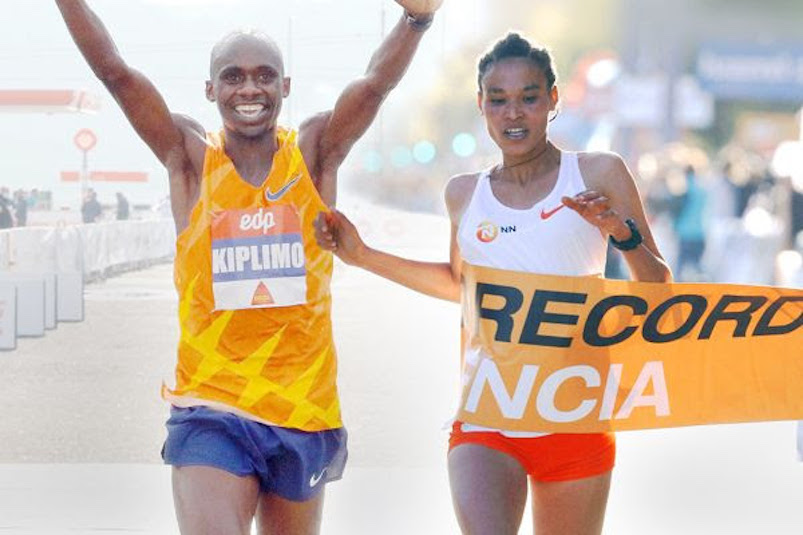 The world half marathon records set by Ethiopia’s Letesenbet Gidey and Uganda’s Jacob Kiplimo last year have been ratified.

Gidey ran 1:02:52 at the Valencia Half Marathon Trinidad Alfonso EDP when making her debut at the distance on 24 October, while Kiplimo clocked 57:31 at the EDP Lisbon Half Marathon on 21 November.

Gidey, competing in the same Spanish city where she had broken the world 5000m record in 2020, took 70 seconds off the previous world half marathon record of 1:04:02 set by Kenya’s world marathon champion Ruth Chepngetich in Istanbul on 4 April 2021.

As a result, 23-year-old Gidey became the first woman to officially break the 64- and 63-minute barriers for the half marathon. She was also the first debutante to set a world record for the distance.

“I knew I could run this kind of time as my training sessions in the altitude of Addis Abeba have gone very well,” said Gidey, the Olympic bronze medallist and world silver medallist over 10,000m. “In future I’m thinking of competing at the marathon distance but I’m not sure that will come before the Paris 2024 Olympic Games or later.”

Less than a month later, world half marathon champion Kiplimo won his race by more than two minutes to shave one second from the previous world record set by Kenya’s Kibiwott Kandie in Valencia on 6 December 2020.

Having reached the 10km point in 27:05, Kiplimo was well on schedule to break the record and his 15km split time of 40:27 was the fastest ever recorded for the distance.

“With one kilometre to go, I knew that I was going to break the world record,” said Kiplimo, the Olympic 10,000m bronze medallist. “When I was on the final straight and saw the clock, I gave it all I had and told myself I had to sprint fast to reach the finish line.”