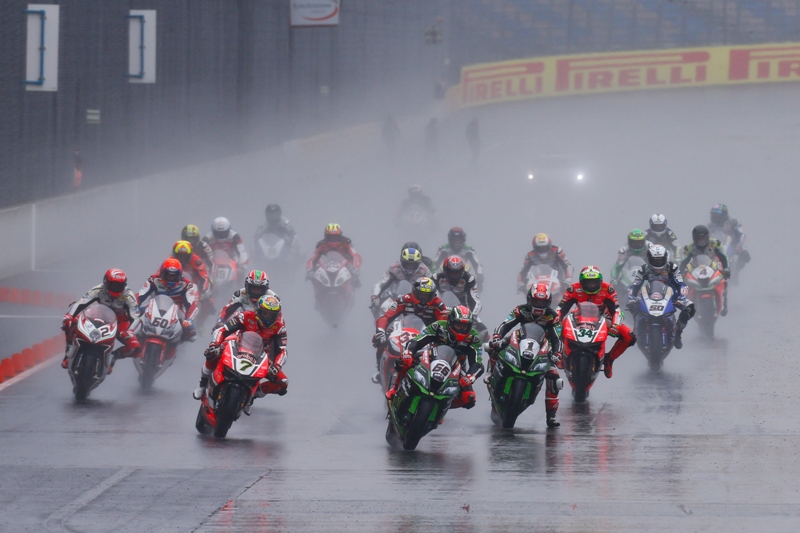 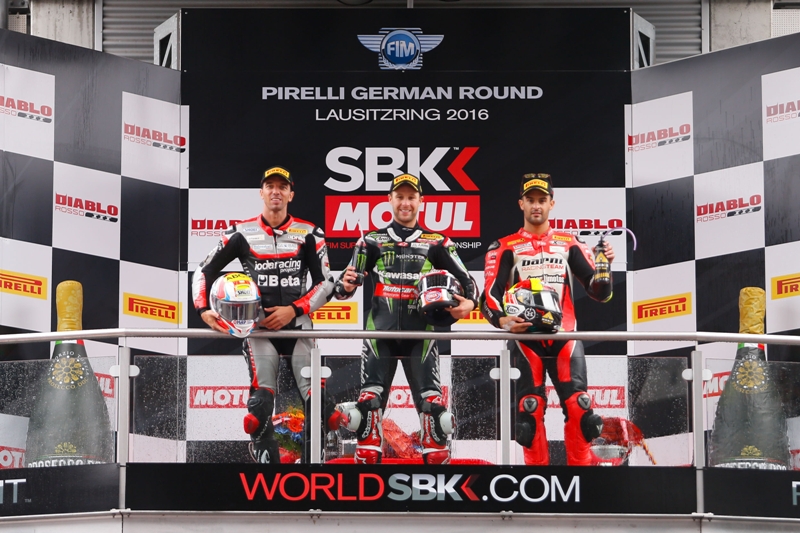 Kawasaki Racing Team’s Jonathan Rea found redemption in Race 2 on Sunday at the Lausitzring in a dominant performance, seeing him win by a 9.3 second margin ahead of newcomers to the WordSBK podium IodaRacing Team’s Alex De Angelis and Barni Racing Team’s Xavi Fores.

Rain began to fall during the German National Anthem as riders were lined up on the grid, delaying the start of the race twice as the rain gradually came down heavier after every warm up lap attempt. Kawasaki Racing Team’s Tom Sykes got the holeshot and lead into the first corner ahead of Race 1 winner Chaz Davies (Aruba.it Racing – Ducati) and Sykes’ teammate Jonathan Rea.
Sykes ran wide allowing Rea to take advantage and shoot ahead. Nicky Hayden (Honda World Superbike Team) got off to a bad start with a wheelie off the line before he got caught up in the first corner and dropped back to P17.

Sykes was the first victim of the weather and crashed out before the end of the first lap, leaving Rea to extend his lead ahead of both the rest of the field and in the overall standings. Sykes later rejoined and was able to salvage four points, finishing in P12.
IodaRacing’s Lorenzo Savadori, and Aruba.it Racing – Ducati’s Davide Giugliano, closely followed by MV Agusta Reparto Corse rider Leon Camier and De Angelis all had good pace in the wet and were all hunting down Davies. Giugliano charged ahead into second before a highside saw his chances of a podium finish disappear on lap five, one lap after Savadori crashed out after setting the fastest lap time.

Even though Sykes was out of podium contention, the reigning World Champion continued to charge ahead to secure the important 25 points to add to his title defence campaign. Leon Camier put in another incredible ride into the top four for MV Agusta Reparto Corse, trying to catch Fores for P3 before crossing the line just off the podium and equalling his best result of the year once again. Pata Yamaha Official WorldSBK Team’s Sylvain Guintoli showed he’s back in form after battling with Chaz Davies to finish ahead of him in fifth.

Milwaukee BMW rider Josh Brookes showed his wet weather quality by finishing the treacherous race in seventh. After sliding out of the race in the closing laps, Honda World Superbike Team’s Michael van der Mark rejoined in an impressive push to the line on his battered Fireblade in eighth, ahead of Roman Ramos (Team GOELEVEN) in ninth and his teammate Nicky Hayden finishing in tenth.

VFT Racing’s Luca Scassa overcame the slippery conditions to finish in P11, while Grillini Racing Teams’ Gianluca Vizziello finished in P13. Team Toth’s Pawel Szkopek looked hopeful moving into the top ten before a minor crash relegated him to P14 ahead of Milwaukee BMW’s Karel Abraham who picked up one point in P15.

Rea: “I’m so happy. Our backs were against the wall yesterday with what happened. We came out fighting today. There was no other option. I really want to thank all my mechanics because they turned the bike around after yesterday’s crash. They gave me pretty much a new bike. This is for the whole team because we are really working hard for our goal. It seems like we gave some food to our rivals but it was time to take back the result today which I really wanted. It was so difficult in the wet conditions but I had a really good feeling with the bike.”

De Angelis: “Of course to be on the podium is something amazing. Especially for me because it is my first one in this championship and also because I’m coming back from a very bad accident last year in Japan. It was really a long winter, doing a lot of rehabilitation. I am still not good but it was a really nice race and I’m very happy and I never gave up.”

Fores: “I’m really happy with this as it’s my first podium in WorldSBK, especially because during the weekend we have had a lot of problems in dry conditions with trying to find a good set-up for the bike. I was looking forward to a wet race all through the weekend because I felt good on the bike. So I want to enjoy this result with my team. I want to say a special thanks to Barni (Team Principal Marco Barnabò) as he came back from yesterday as his father passed away, so this result is for him.”