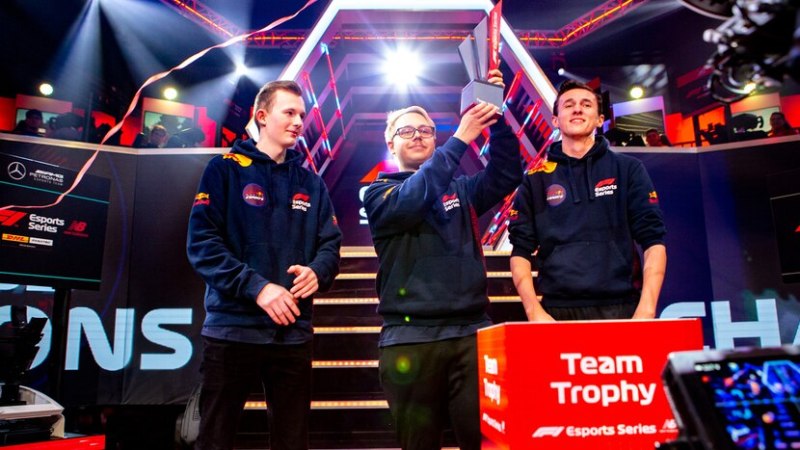 Just over two weeks on from becoming Forza Motorsport World Champions, the Red Bull Racing Esports Team capped off a stellar 2019 Formula 1 Esports season last night by claiming the Teams’ Championship over the second-placed Ferrari Driver Academy Team.
Two wins and five points scoring finishes on the night saw off any competition for the coveted trophy, meanwhile Frede Rasmussen also came close to securing the Drivers’ Championship but ultimately just fell short to season-long rival David Tonizza of Ferrari.
FREDERIK RASMUSSEN (Denmark):
Race 1: Finish Position:       P1 (25 points)
Race 2: Finish Position:       P1 (25 points)
Race 3: Finish Position:       P10 (1 point)
Driver Standings:                P2 (171 points)
“A lot of practice hours have gone into this title so it feels really good to have finally won it. My teammates have been great and a big help so we definitely couldn’t have done it without them. Joni did so much set-up work, it’s insane how many hours of practice he did and Nicolas did great in his race and practices as well. Nicolas was due to race in the final round so I wasn’t expecting to be driving, but with a four point lead in the Driver Standings we decided as a Team that we would swap back and I would go for it. It was a fun race and we didn’t quite make it, but the Teams’ title is definitely the focus and we are all very happy.”
JONI TÖRMÄLÄ (Finland):
Race 1: Finish Position:      P8 (4 points)
Race 2: Finish Position:      P11
Race 3: Finish Position:      P5 (10 points)
Driver Standings:               P9 (57 points)
“It feels awesome to be Team champions. It was our goal from the beginning of the year and at first it looked like it was going to be difficult. In the end, we managed to pull quite a big gap in the points to second place so I’m really satisfied with that. We put in so many hours of work so it’s a big relief. I’ve been hoping to lift that trophy for months so it feels great and it couldn’t be better. This was definitely a Team win, we worked hard together and looking at the results, everyone contributed towards this victory. I did around 600 hours of driving during the series, it’s a full-time commitment and I’m glad I can take a holiday now because it’s been really intense. Of course it was all worth it though and I’d do it all over again.”
NICOLAS LONGUET (France):
Driver Standings:                 P17 (18 points)
“It feels amazing to be Team champions in my first season and there’s no more I could ask for. There’s so much work behind the scenes that I don’t think people realise and appreciate enough. Joni, Frede and the entire Team are working long hours each day doing set-up work, looking at strategy, getting the most out of the cars. My teammates are two of the best drivers on the grid in my opinion. They helped me a lot to learn and gain experience so I’m very grateful for them. Going into the final race, which I was going to take part in, we decided that with Frede’s chance to win the Drivers’ title, it only made sense for him to take my seat and take a shot at it. I would have asked for the same if I was in his position. Looking ahead to next year, I hope I can do some more races and show what I can do, but this year has been very positive.”
CHRISTIAN HORNER, ASTON MARTIN RED BULL RACING TEAM PRINCIPAL:
“It’s a fantastic achievement for the Red Bull Racing Esports Team to win the Championship in only its second year. The level of competition has been extremely high and just like in the real world our drivers have really had to deliver consistently at every event to come out with the teams’ title. Congratulations to everybody involved and we’re very proud to have won the Championship.”
TEAM STANDINGS:
Red Bull Racing Esports                246 points
FDA Hublot Esports Team             184 points
Alfa Romeo Racing F1 Esports     176 points