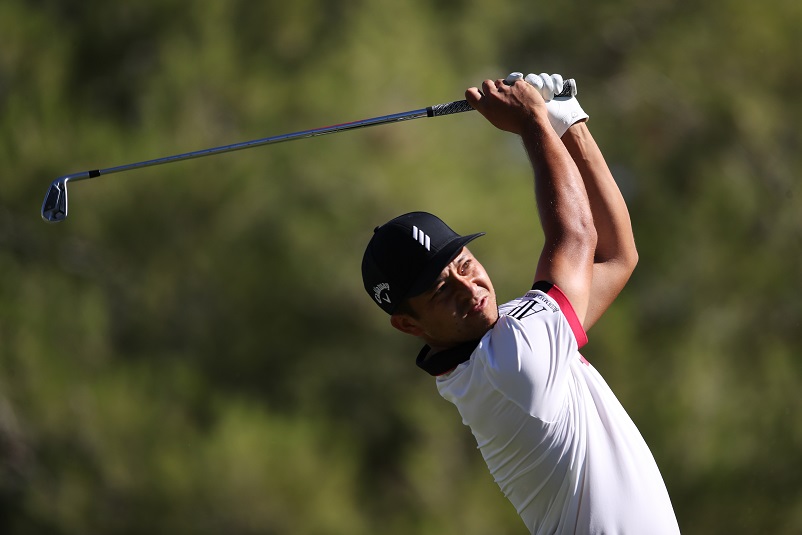 American Xander Schauffele wielded a hot putter for a superb 8-under 64 to grab a three-shot second round lead over Tyrrell Hatton of England at THE CJ CUP @ SHADOW CREEK on Friday.

Schauffele, a four-time PGA TOUR winner, produced a career low nine-hole score of 29 on his outward journey which featured seven birdies, including six on the trot. He converted 133 feet of putts as opposed to Thursday’s 76 feet and currently ranks third in Strokes Gained: Putting. With a two-day total of 14-under 130, it will be the third time Schauffele has held the second-round lead on TOUR.

After an opening 65 on Thursday, first-round leader Hatton, who was victorious on the European Tour on Sunday, ground out a 68, with two closing birdies keeping him within touching distance in the US$9.75 million showpiece, which was moved from its home base in Korea to Shadow Creek in Vegas this year.

Russell Henley shot a 68 for solo third on 134, with Talor Gooch a further shot back after a fine 65. PGA Championship winner Collin Morikawa also fired a 65 and enters the weekend six back while defending champion Justin Thomas stands at 138 after a blemish-free 66 in the tournament stacked with 25 players from the top-30 of last season’s FedExCup standings and six from the world’s top-10.

Asia’s best-placed performer after two rounds was Japanese star Hideki Matsuyama, who produced a 68, for tied eight place while Hanbyeon Kim and Si Woo Kim ended the day as the leading Koreans in joint 33rd position.

Starting on 10, Schauffele birdied his second hole and caught fire on the 13th with a three-feet conversion. He drained putts of 26 feet and 37 feet on Hole Nos. 14 and 15, made a six-foot birdie on 16 before chipping in from off the green on 17 followed by a 13-foot birdie on 18 for his 29.

After making the turn, he managed only one birdie and saved par on the last with an 11-foot putt. He has now carded 15 birdies through two rounds, tying career-most after 36 holes which he achieved at the 2018 BMW Championship.

“When you shoot 29, things are flowing, things are easy, you’re not really thinking much at all,” said Schauffele, who finished second in the FedExCup final standings last season. “It was nice. Some of those holes, you’re not really trying to birdie them, you’re kind of just trying to leave yourself an uphill 35 footer and fortunately I made a couple of them. Got a little bit stale there on the other side. Upset I didn’t make more birdies, but pleased I didn’t make any bogeys … just happy I made that par putt on the last.”

The animated Hatton, who won his first PGA TOUR title at the Arnold Palmer Invitational presented by Mastercard in March, turned in 33 but made life difficult with four birdies against three bogeys on his inward nine. “It was an inconsistent day,” said the 29-year-old.

“Obviously I was disappointed with bogeys on 15 and 16. I hit a couple of poor shots there, especially the one that annoyed me the most was laying up with a 6 iron on 16 and we didn’t even look like hitting the fairway. So that’s just a stupid mistake, but obviously really happy with how we bounced back. Finishing birdie, birdie was nice.”

Rising star Morikawa, who has won three PGA TOUR titles including a major at the age of 23, produced seven birdies against no bogeys to stay on playing partner, Schauffele’s coattails. He birdied the par 5 18th hole despite finding water with an errant tee shot.

“Yesterday I had it going, I had a couple bad swings. I think on 15, hit in the water (for double bogey). Today I just kind of minimized those mistakes. Obviously I hit it in the water on 18, but I gave myself a lot of good looks and putts started dropping. And when you have momentum like that, you just want to keep it going,” said Morikawa.

With two wins in Korea in 2017 and last year, Thomas is seeking a successful defence at a different venue which is a Tom Fazio gem in Vegas. He hit 16 greens in regulation, a stark improvement from yesterday’s nine greens en route to an opening 72. “I mean it was substantially easier with the wind, but yeah, I hit it a lot better. I left a lot out there, but I made as many putts as I felt like I had missed, I made just as many. I guess I played my way somewhat back into it, but Xander kind of went off today, so that makes it a little harder,” said the 13-time TOUR winner.

World No. 2 Jon Rahm ended the round in a share of 15th place following a disappointing 73 while Brooks Koepka, the 2018 CUP CUP winner and making a comeback from injury after a two-month break, shot a 68 for equal 26th place alongside two-time FedExCup champion Rory McIlroy, who carded a 69.