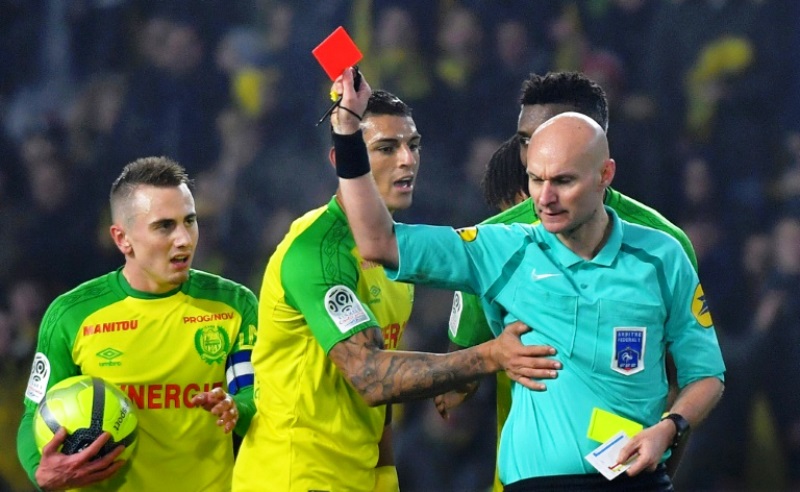 France’s Ligue 1 launches into a midweek round of games after a weekend marred by referee Tony Chapron’s bizarre kick at a Nantes player and goal-line technology glitches.

Chapron has been suspended by the French Football Federation “until further notice” after kicking the Nantes defender Diego Carlos and then sending him off towards the end of their 1-0 defeat to league leaders Paris Saint-Germain on Sunday.

The bizarre incident, footage of which has gone viral, could have serious consequences for 45-year-old official Chapron, who has apologised.

Diego Carlos has since had the second yellow card rescinded after it was shown when he knocked Chapron over in an accidental collision at the Stade de la Beaujoire.

That means he can play for Claudio Ranieri’s fifth-placed side at Toulouse on Wednesday, but Chapron — who recently refereed a game in the Chinese Super League — will not be the man in the middle for the match between Angers and Troyes.

He will be called to appear before the French league’s disciplinary commission at a later date to explain himself.

He may also have to explain why Nantes had an equalising goal disallowed against PSG — Emiliano Sala, who headed in from a free-kick, was not in an offside position, although two of his team-mates were.

“We tried to equalise, but here there is no VAR (video assistant referees)”, bemoaned Ranieri. “Except, for me, Sala was coming from behind and the goal was valid.”

VAR is now used in several leagues, including in the German Bundesliga and Italy’s Serie A.

However, the French league (LFP) are hoping to introduce it for next season and carried out tests in last week’s League Cup quarter-finals.

In the meantime, the LFP have indefinitely suspended their use of goal-line technology because of “serious dysfunctions”, including in the League Cup tie between Amiens and PSG.

The capital club moved 11 points clear at the summit after beating Nantes courtesy of an early Angel Di Maria goal for their seventh straight win in all competitions.

PSG coach Unai Emery will hope to have Neymar back against Dijon at the Parc des Princes after the world’s most expensive player missed Sunday’s game with a rib problem.

Edinson Cavani, who returned against Nantes after being left out of PSG’s first two games of 2018 following a late return from a holiday in South America, is still just one goal away from equalling Zlatan Ibrahimovic’s club record tally of 156.

Behind the leaders, only one point separates second-placed Monaco, Lyon in third and Marseille in fourth.

Reigning champions Monaco host Cote d’Azur rivals Nice, a week after beating them 2-1 away in the League Cup quarter-finals.

Monaco coach Leonardo Jardim is hoping Radamel Falcao can feature for the first time in 2018.

“Falcao and (Guido) Carrillo have had problems, but we need a striker to maintain an impact in attack. Both of them can play,” Jardim said.

The 27-year-old midfielder will hope to make his first appearance in French football in five years when Saint-Etienne go to Metz.

M’Vila joined struggling Saint-Etienne last week after leaving Russian club Rubin Kazan. Once a great French hope, the midfielder has had spells at Sunderland and Inter Milan since leaving Rennes.