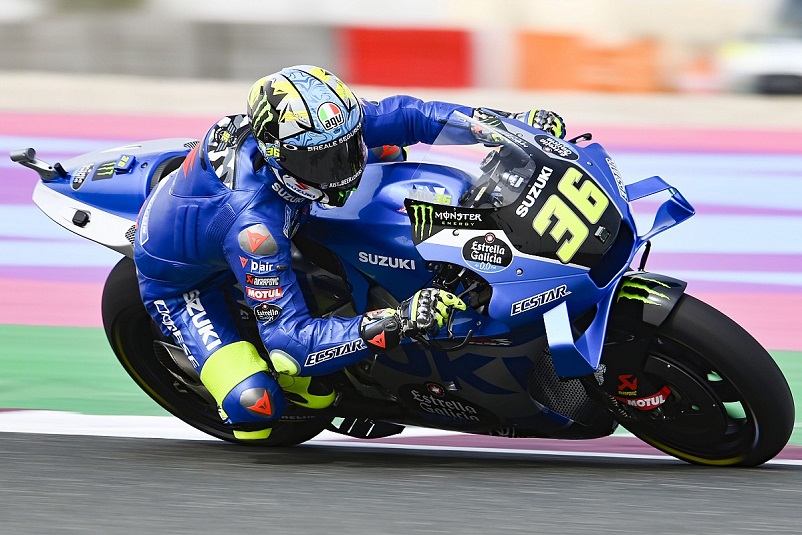 Team Suzuki Ecstar, thanks to Alex Rins, topped the timesheets on Day 1 of 2022 as MotoGP™ returned to blistering action at the Grand Prix of Qatar. The Spaniard set a 1:53.432 under the lights in FP2 to lead Marc Marquez (Repsol Honda Team) by 0.035s, as Joan Mir (Team Suzuki Ecstar) completed the top three.

Suzuki vs Honda under the lights on Day 1

With the Lusail International Circuit floodlights beaming, the premier class got straight to work and the lap times fell. Marc Marquez sat top before Aleix Espargaro (Aprilia Racing) took over as the riders got some valuable laps under their belts at the same time the race is going to be at on Sunday.

With 20 minutes to go, the time attacks started. Pol Espargaro (Repsol Honda Team) climbed to the summit as Luca Marini (Mooney VR46 Racing Team) crashed unhurt at Turn 1. Pol Espargaro went even faster on his second flying lap on the soft tyres, his gap was up to 0.4s, but a whole heap of rapid laps were about to be posted.

The first 1:53 lap was posted by Mir with 13 minutes to go. That was swiftly beaten by Marc Marquez, the new benchmark was a 1:53.711, but that time didn’t stand as the fastest for long either – Rins went 0.174s clear. Jorge Martin (Pramac Racing) closed the gap with two minutes to go before Mir made it a Suzuki 1-2, but Marc Marquez returned to P1 with a minute left on the clock.

Again, though, Rins ensured Marc Marquez didn’t spend long at the top, and that’s how it ended. Rins is the rider to beat heading into Day 2 from Marc Marquez and Mir.

Who’s in the all-important provisional top 10?

For the most part, it had been a quiet day for the Ducatis but Martin takes away a P4 from Friday’s running, the 2021 Rookie of the Year sits ahead of fastest Yamaha Franco Morbidelli (Monster Energy Yamaha MotoGP™) – a late time saw the Italian leap up the timesheets. Jack Miller (Ducati Lenovo Team) is sixth ahead of qualifying day in the desert, as Aleix Espargaro (Aprilia Racing) grabbed P7 despite getting in a bit of a tangle with teammate Maverick Viñales on his final flying effort.

Reigning World Champion Fabio Quartararo (Monster Energy Yamaha MotoGP™) is four tenths off the pace in P8, just ahead of Pol Espargaro in ninth and Francesco Bagnaia (Ducati Lenovo Team) in tenth – the Italian sneaking into the top 10 after a crash at Turn 6 in FP1.

0.8s splits the top 15 down to FP1 pacesetter Brad Binder (Red Bull KTM Factory Racing), as the riders outside the top 10 now face an uphill battle to try and earn an automatic Q2 place in the warmer, day time conditions.

Alex Marquez (LCR Honda Castrol) crashed twice in quick succession in FP2, once at Turn 6 and then on the next lap at Turn 10 – rider ok.