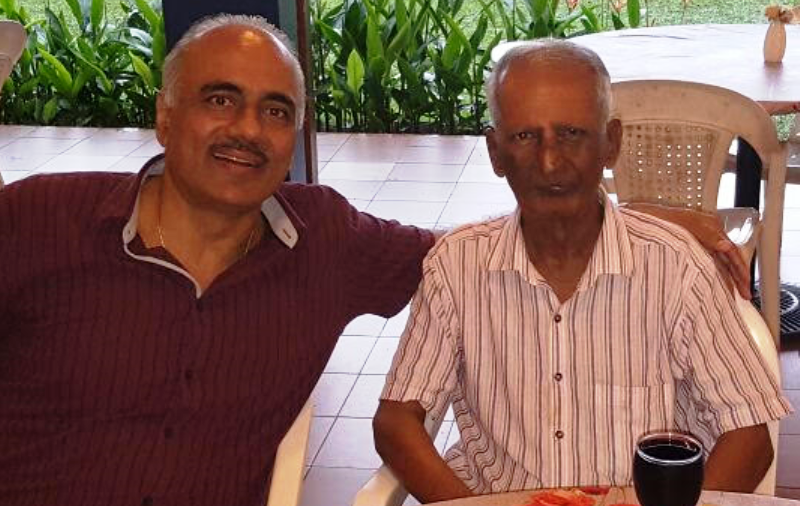 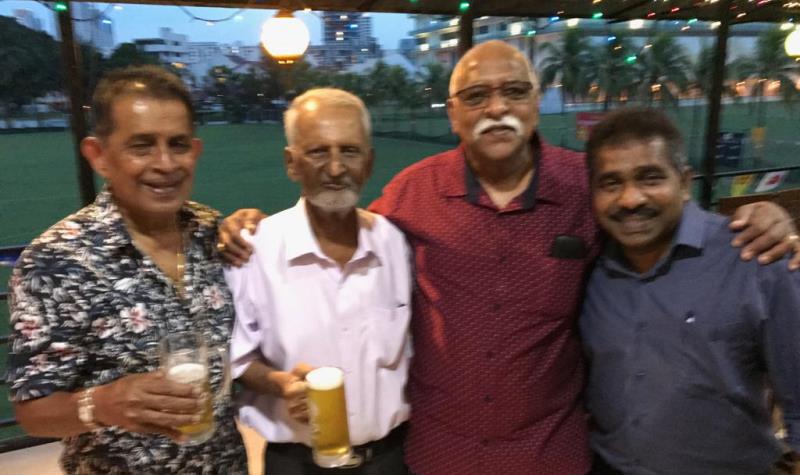 WHEN the late Sultan Azlan Shah once asked a group of Malaysian hockey legends who was the global striker they feared the most, the reply came in a six-letter word: Lingam.

The former Malaysian King was surprised because he was in the company of legendary names like Sri Shanmuganathan, R. Yogeswaran, Rusty Thuraisingham, Ranjit Singh and C. Paramalingam, who ruled Asian hockey in the 1960s and 70s.

They didn’t name an illustrious Indian or plucky Pakistani, nor a giant German or a hulking Holland goal-scorer. They unanimously reiterated: Sangarapillay Thurumalingam (S.T.) Lingam.

Lingam was an exemplary Singapore striker, an inside left as position prevails in the 60s. He was fearless at heart and regardless of who he played against on the regional stage, he rose to the occasion with his outstanding stick wizardry, lightning footwork and above all, a penchant to knock out the best of world-class defences.

Lingam would have turned 79 next Friday (September 14).

For the royal record, the late Sultan Azlan Shah, from Perak, who passed on in May 2014, is revered as the ‘Father of Malaysian hockey’ for his contributions to the sport for over 41 years, both as a player and administrator.

The Sultan Azlan Shah conversation was recounted by Lingam’s nephew, lawyer M. Lukshumayeh, the former Singapore Hockey Federation (SHF) President and now President of Ceylon Sports Club (CSC) as he paid tribute to an “extraordinary uncle who was an awesome role model to me”. 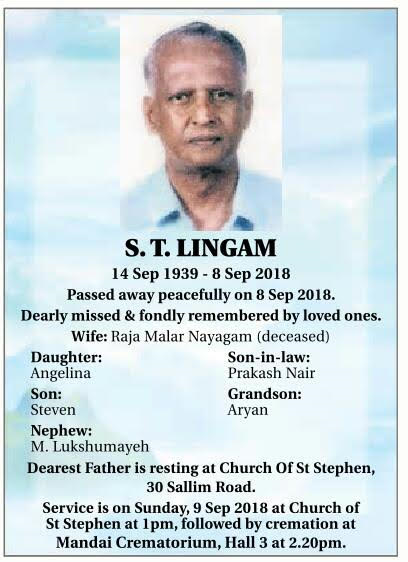 HE PLAYED WITH ONE EYE!

“He was a brother and a friend to me. He was my mentor in life,” he says. “I followed his footsteps into hockey. Though not a national player anywhere close to him, it took me to hockey management and on to the SHF presidency.

“I went into the airlines industry like him, became a member of CSC and I had the honour of playing alongside him. He was even instrumental in me getting my law degree. I owe him so very much.”

Lukshumayeh revealed, too, that Lingam distinguished himself, playing with only one eye! He may be discreetly blind in one eye, but what Lingam has lost in sight he made up for with overwhelming heart and passion on the field of play, be it hockey, football, cricket, rugby or athletics.

He says:  “He lost sight when he was very young and because of family financial constraints, nothing could be done then. He put this eye-handicap aside and excelled to be a world-class striker, clearly recognised by his international peers. Imagine what more he could have done if he had sight of both eyes.”

Lukshumayeh also opened up, for the first time, that Dato’ R. Yogeswaran, the Malaysian legend striker  who starred in several Asian Games (Jakarta – 1962, Bangkok – 1966), Olympics (Tokyo – 1964, Mexico – 1968) and numerous other tournaments, praised Lingam as someone who made the “impossible possible and resurrected his hockey career despite being the handicap of effectively playing with one eye”.

Dato’ Yogeswaran, who played for the Asian All-Stars team in 1966, says Lingam even  perfected the skill of hitting on the ‘wrong foot’, a skill most coveted by left-sided players, long before reverse-stick hits became a norm in today’s modern hockey game. Combined with his stunning speed on the field, he revelled on the left wing and left-inside positions, in the traditional ‘pyramid system’, mesmerising the opponents as well as his own team-mates!

“So when (the late) Sultan Azlan Shah asked several leading Malaysian hockey legends who’s the most feared global striker, Lingam’s name instantly came up as you just cannot knock the man down,” he explains. “Mark him, whack him, down him to the ground and he’ll come back, again and again, to further terrorise you with his extraordinary speed, power and stick-artistry.” 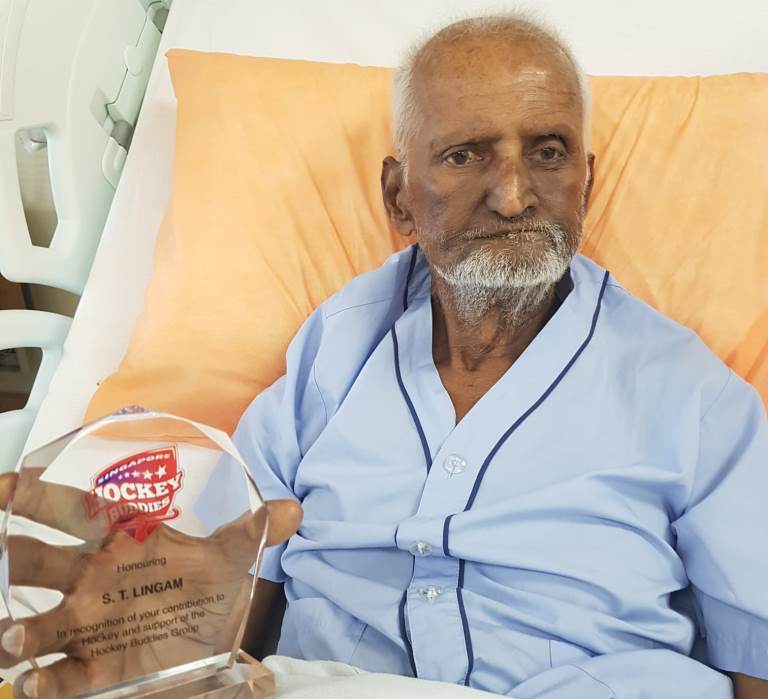 Dato’ Yogeswaran recollects Lingam with the nickname “Squeeky Lingam” and heartfeltly says “he has left us to be in God’s loving arms”, He adds: “I have personally lost a good friend and Singapore a hockey legend and more so, a wonderful human being.

“He was in the era of some of the greatest Singapore names whom I had the privilege of having played with and against, like Anwarul Haq, Chai Hon Yoon, Saboo, Colin de Souza, Kanagalingam, Harbajan Singh, Douglas Nonis, Kartar Singh, Dollah, just to name a few.

“Significantly, Lingam was a member of the Singapore team that beat Malaysia 1-0 in a rain-affected pitch at the Lahore International in the 1960s. My good friend Haque till today teases me about this result. My heartfelt condolence to Lingam’s family. May his soul rest in peace.”

He says: “I’m choked for words. We’re glad we were able to present him with a special appreciation plaque in July, through Lukshumayeh, to recognize his immense sporting contributions. The award, I was told, meant the world to him as he missed this year’s event as he was hospitalised.

“Lingam, even in fast failing health, knew he was amongst people who loved and adored him. His friendship and contribution to ‘Hockey Buddies’ will never be forgotten. What a magnificent role-model striker he was. As a kid, I watched him play, than against him, finally with him…it was a sheer privilege.” 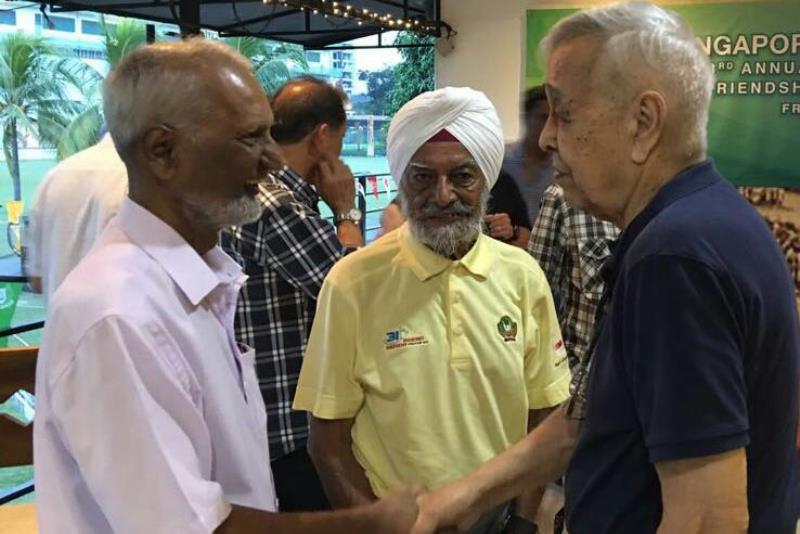 Former Singapore and Singapore Recreation Club (SRC) player-coach V.K. Chelvan, also a formidable international striker, remembers Lingam as one of the best left-insides in his days. He says: “He was referred to as ‘half of the Singapore strikers’ for his speed, agility and finishing power. When he moved into the semi-circle, the defenders and goalkeeper used to panic.

“He was, in a nutshell, one of the great fighters in the game of hockey. Never wanting to lose in any game – local or for the national team – so much so (former Singapore coach) Pat Neubronner once told me: ‘If we had 11 players like Lingam, we can take on any team.’”

Former international fullback-skipper Farouk Marican, who also served as national team manager after he hung up his stick, describes Lingam as a “great friend and mentor for 57 years”.

“More than a brother from our CSC (Ceylon Sports Club) days. A thoroughbred fighter both on off the field. He was absolutely generous to a fault,” he says, voice choked with emotion. “Like all of us, he had his human weaknesses…who has not. But he was very positive to the very end. I regret I will not be there on his final journey. As they say, Lingam was an awesome sportsman with a great innings.”

Marican, adds, tongue-in-cheek, alluding to the string of former hockey greats who passed on recently. “Another legend gone. They can form at super team up there,” he says. “Surajan, Richard, Bhupinder, Kanaga, Sarbo, Malkit, Kartar, Kishor, Abdullah, Anthony, Vincent, Rudy, Coutts, Frida. What a formidable Made-in-Singapore heavenly side!”

He adds: “Thanks for all the inspiring guidance during my playing career at Ceylon Sports Club (CSC) where you gave me full advice and on how an effective left-half should play. His advice: ‘Bottle up the right winger and you will shine’. He was soft spoken but a very cool person on and off the field.”

Former Singapore fullback Uttam Singh, who once counted on Lingam as a Singapore Airlines (SIA) colleague as he worked as a duty manager at the-then Paya Lebar Airport, looks up at him as a “man of virtue, dignity and humility”.

“Through his unfailing belief and perseverance, he set the highest standards for hundreds of youngsters. There are no simple words to describe his immense contribution to the sport. We’ve lost a great man who was loved, respected as a leader and a perfect gentleman. The hockey fraternity will always be indebted to him and will miss him dearly,” he says.

Roland Schoon, one of the few surviving Singaporeans who played at the 1956 Melbourne Olympic Games, admires the “gifted knack of Lingam to make his mark in the semi-circle”. He says: “One of the most important jobs of a striker is to score goals, so the ability to be clinical and composed in the ‘D’ is definitely something you should work on.

“You should also be able to shoot of either foot and possess several different scoring techniques. Lingam was a class act.  He showed he had the fluctuations in consistent performance and scoring rate. It is an inevitable part of sport. By having a positive attitude to keep hunting for goal scoring opportunities the goals will come.”

Schoon, now 91 years, who is also a prolific golfer, says Lingam come under the class of “great strikers who always believe that they can score in every game against any defence”.

Former The Straits Times Sports Editor Godfrey Robert, who was goalkeeper at CSC and IA (Indian Association) during the Lingam era, hails him as “one of the best inside forwards I’ve watched in hockey and comparable to some of the greats India has produced on grass”.

He adds: “With Kartar Singh, Lingam produced a lethal combination as a striking partnership, and I have seen him score goals purely on instinct and skills. I was in the same team with him at CSC in the late 1960s and I enjoyed watching his silky skills and dazzling moves from behind as I was playing as goalkeeper. Later when I crossed over to IA, I would joke with him to take it easy when facing me in the opposite goal! But he always played the game in its true spirit.

“Off the pitch, he had helped with problems at the airport (Paya Lebar Airport, then) and has on many occasions, upgraded me and my family whenever possible as he was manager. ST, you’re a great friend and very good playing colleague.”

The Singapore Hockey Federation (SHF) offered condolences to the Lingam family. SHF President Mathavan Devadas, whose father Vellupillai Devadas played in the 1956 Melbourne Olympic Games, sent me a SMS: “S.T. Lingam was an extremely dedicated hockey player. A value-add role model. Once he crossed that line and stepped onto the field, he was very committed and he demanded the same from everyone.”

Little wonder, the late Sultan Azlan Shah was overawed by unanimous praises from Malaysian legends who jotted Lingam’s name as the “most feared striker”.

Truly fearless at heart and regardless of who he played against on the regional stage, he rose to the occasion with a penchant to knock out the best of world-class defences. – BY SURESH NAIR