Home 2018 Sagan calm as Belgian challengers line up in Flanders 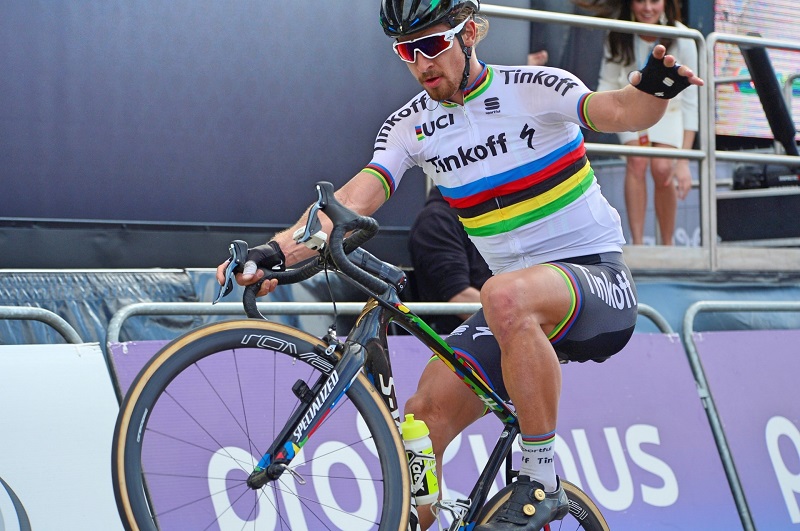 World champion Peter Sagan will feel he is taking on the whole of Belgium when he lines up on the start line of the 265km Tour of Flanders on Sunday.

As ever, all of them will be desperate to avoid arriving at the finish alongside the Slovak, whose devastating kick finish has helped him win the world title three years in a row.

Having won the prestigious one-day semi-classic Gent-Wevelgem for the third time last weekend, Sagan knows he will be the man in everyone’s sights, but he’s typically calm.

He went for a reconnaissance ride along part of the hilly, cobbled course on Thursday.

“I was in a quiet place, I wasn’t in all this atmosphere of the race,” Sagan said from his hotel in Roeselare on Saturday.

“I was training and (I felt) quite relaxed.”

Unlike for the men lining up and aiming to beat the 28-year-old, Flanders is perhaps a little less important to Sagan.

For some Flemish riders, such as Van Avermaet, this race can become an obsession.

He’s won a number of important races — the Olympics, Paris-Roubaix, Gent-Wevelgem — but admits a Flanders victory would be extra special.

Sunday’s race will pass right beside his home town of Lokeren and after winning Paris-Roubaix last year, Van Avermaet admitted that he would still rather win in his home region.

Sagan doesn’t have that problem, he’s already won Flanders and holds his world championship victories in higher regard.

“It’s an important race because this race has history, it’s an old race, (it’s been going for) a lot of years,” said Sagan.

“It doesn’t matter from which country is the race — if it’s Roubaix, Flanders, Milan-San Remo or the Tour de France — it’s the name of the race that’s already important.”

His relative indifference to winning Flanders can be an advantage up against rivals for whom a victory would change their lives.

But on the flip side, Sagan’s Bora-Hansgrohe team cannot match the strength of Gilbert’s Belgian Quick-Step outfit.

Alongside the reigning champion, they have former Paris-Roubaix winner Niki Terpstra from the Netherlands and Belgian Yves Lampaert, who three days ago won the semi-classic Dwars door Vlaanderen.

They may have strength in numbers, but team owner Patrick Lefevere knows they will have to get their tactics right in a race that includes 18 hills and 12 cobbled sections — nine of which overlap.

“We have to avoid bringing Sagan and Van Avermaet to the Paterberg,” he said in reference to the final cobbled climb of the race, which is crested 13km from the finish.

“They’re a bit more explosive than our riders. We’re going to have to find a way to drop them earlier.”

Gilbert managed that last year with an audacious solo attack 55km from the finish.

It paid off, but perhaps in part because Sagan and Van Avermaet crashed 17km from the finish as they launched their counter-attack.

Van Avermaet still remounted and took second place in a year in which he was barely beatable — he won three semi-classics in the lead up to Flanders and then Paris-Roubaix a week later.

This year he’s been struggling, but the Rio Games champion from 2016 remains confident.

“OK, my results haven’t been the same as last year, but I’m happy with my form,” said Van Avermaet, whose best result so far in 2018 was third at the semi-classic E3 Harelbeke. – Agence France-Presse