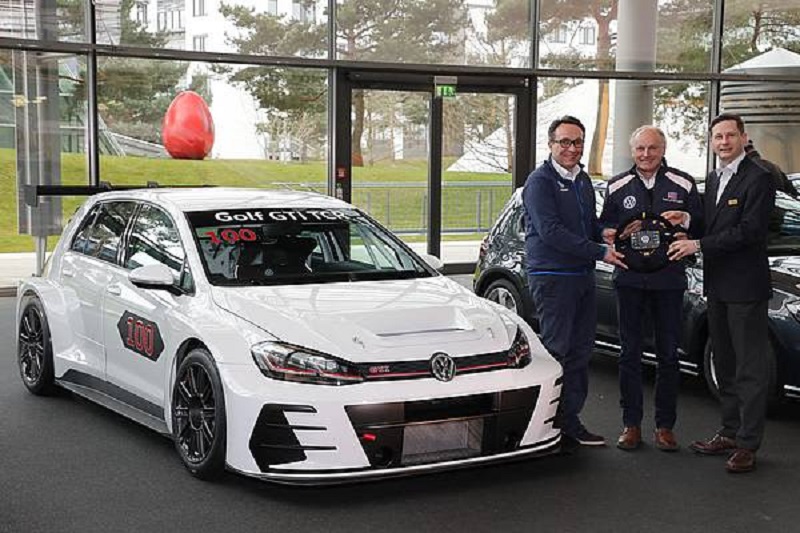 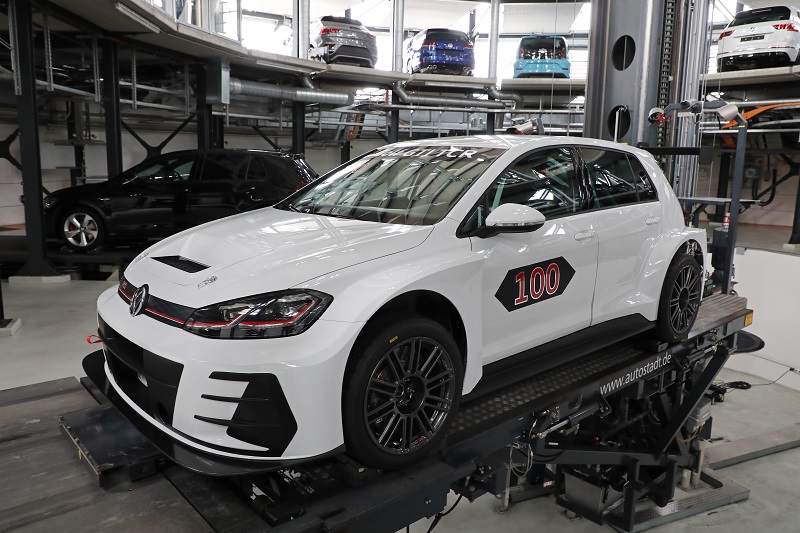 First handover of a racing car in Autostadt, Wolfsburg

When a Volkswagen Golf GTI TCR in full racing regalia is to be found alongside perfectly polished production models of the Volkswagen Polo, Golf, Passat, Arteon, Tiguan and T-Roc in the striking, futuristic handover towers at Autostadt in Wolfsburg, then there hast to be a special reason. Instead of being handed over at Volkswagen Motorsport in Hannover, as is customary, a special honour was bestowed upon the 100th model of the 257-kW/350-hp Golf GTI TCR: a handover in Autostadt.

This was much to the delight of the many visitors and customers in Autostadt: after all, it is not every day you get to experience such a thoroughbred racing machine at first hand. The lucky owner of the 100th Golf GTI TCR is Franz Engstler. The racing team owner from the Allgäu region of Germany, who purchased the first customer model of the Golf GTI TCR to be delivered two years ago, received the symbolic key to the car from Volkswagen Motorsport Director Sven Smeets and the head of vehicle delivery at Autostadt, Sebastian Wilhelms.

“The Golf GTI TCR tells a fantastic success story within the Volkswagen customer sport programme,” said Sven Smeets. “Private customer teams successfully field the Golf GTI TCR in more than 15 different racing series all over the world. The Golf GTI TCR has already amassed twelve titles in international championships. To have now produced one hundred models in just two years is a great effort from our entire team.”

The Golf GTI TCR is based on the Golf GTI* production model. Under the bonnet is the familiar two-litre turbo engine with direct fuel injection, which generates up to 257 kW (350 hp) and roughly 420 Nm of torque in the racing version.

The Golf GTI TCR accelerates from 0-100 km/h in approx. 5.2 seconds and has a top speed of approx. 250 km/h. Visually, the biggest difference between the racing version and the production model is the chassis, which is about 15 centimetres wider, and the adjustable, aluminium rear wing. The optimisations for the racetrack also include an aerodynamic front splitter. A racing seat with head protectors, racing safety cell, and an FIA-approved safety tank are among the features helping to ensure maximum safety for the drivers.

The Golf GTI TCR is already one of the most successful touring cars in the world: Stefano Comini (2016) and Jean-Karl Vernay (2017) both won the Drivers’ Championship in the international TCR series, with more titles coming in the TCR Asia (2016 and 2017) and TCR Middle East (2018) series. The Golf GTI TCR, which Volkswagen offers race-ready from 95,000 Euros plus VAT, was also named “Model of the Year” out of all the TCR racing cars.

The TCR series was founded in 2015 and now comprises over 20 international and national series. The top category is the “FIA World Touring Car Cup” (WTCR), which takes place on nine race weekends and kicks off on 7 April in Marrakech, Morocco. This season’s ADAC TCR Germany series gets underway on 13 April in Oschersleben, Germany.