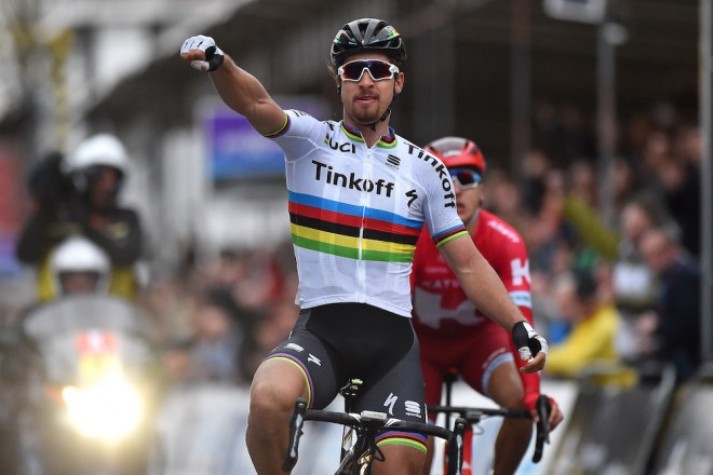 Peter Sagan will be a tough man to beat at Paris-Roubaix next Sunday despite claiming he has fulfilled his season’s objectives.

The world champion won his first ‘Monument’ race by holding off three-time winner Fabian Cancellara at the Tour of Flanders on Sunday.

Adding to his world title in Richmond in the United States last September, this was the biggest win of the talented 26-year-old’s career and the Tinkoff rider claimed his year is already a success.

“Another big victory: first the world championships and now this. It’s something special because it’s with the (world champion’s) rainbow jersey that I could win Flanders,” said Sagan.

“This is my biggest objective in the year from the start: Flanders-Roubaix, and now it’s very good.”

Sagan will almost certainly go into Paris-Roubaix as the favourite having also won the cobbled classic Gent-Wevelgem a week before Flanders and finished second to Poland’s Michal Kwiatkowski two days before that at E3 Harelbeke.

So far this season on the cobbles, he’s been in a league of his own.

Cancellara came into Flanders hoping to become the first man to win the race for a fourth time, but had to admit he’d been bested by a better man.

He was clearly disappointed to have missed out on his date with destiny, particularly having joked two days beforehand that he would ask for Belgian nationality if he won.

“Second is not first and it’s not history. I didn’t win,” said the 35-year-old Swiss.

“Second was still a big thing. I was quite emotional (on Sunday) morning and I still am now.

“After so many tries, finishing second is not bad. I aimed for history but Peter showed (on Sunday) he managed things well: he’s a deserved winner.”

Cancellara, who waved to the crowd as he crossed the finish line 25 seconds behind Sagan, is riding his final season as a professional.

He will still have the chance on Sunday to match the record number of Paris-Roubaix victories if he manages to snatch a fourth success there.

With German reigning champion John Degenkolb still recovering from a training crash in February and missing the entire Spring Classics season, most will likely expect a Sagan-Cancellara battle.

Sagan, though, had no intention of worrying out Paris-Roubaix just yet.

“Now I want to have fun after this big week and next week we will think about next week, not now,” he said straight after his Flanders win.

He spared a thought, though, for two Belgian cyclists — Antoine Demoitie and Daan Myngheer — who died a week before the Flanders race, the biggest in Belgium which is simply known as De Ronde (the Tour).

“I want to dedicate this victory for the two guys who died last week, and also to (Tinkoff team-mate) Maciej Bodnar who had a very bad crash (on Saturday) and unfortunately didn’t start (Flanders) because he’s in hospital,” added Sagan.

Paris-Roubaix’s line-up will also be without Greg Van Avermaet, the Belgian winner of the Tirreno-Adriatico stage race last month.

He crashed innocuously in the first half of Flanders and was taken to hospital with a broken collarbone, showing his frustration as he sat on the Flemish tarmac, sobbing.

Britain’s Team Sky will look to bounce back after ultimately disappointing despite having a seemingly strong squad.

Luke Rowe finished fifth and Geraint Thomas was 12th as both came home in the chase group behind Sagan, Cancellara and third-placed Sep Vanmarcke.

But Kwiatkowski faded badly in the final 20km despite making the initial attack that took Sagan clear of the group of favourites 30km from home.

The Pole, world champion in 2014, finished 27th while Ian Stannard paid for an ambitious attack 40km from the finish and came home 32nd.

More will be expected from them at the ‘Hell of the North’. – Agence France-Presse