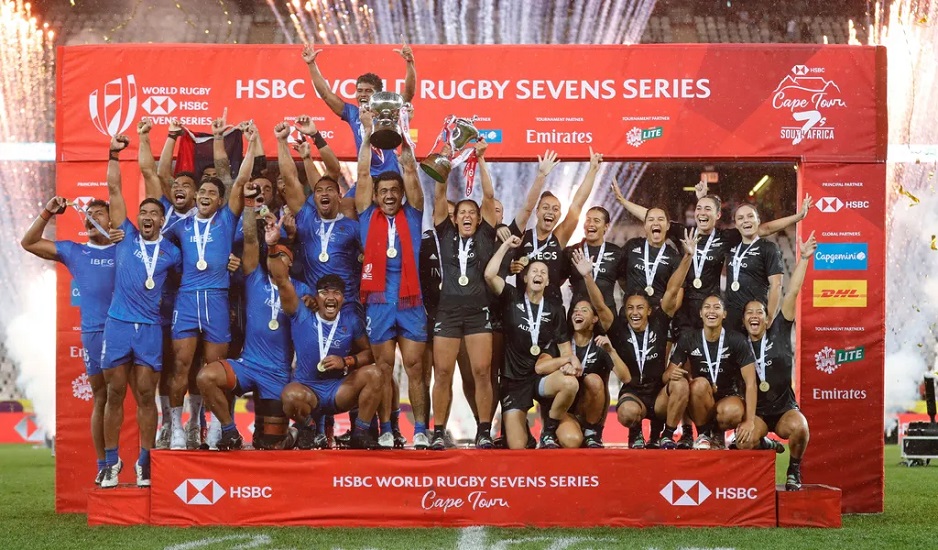 The next rounds of the HSBC World Rugby Sevens Series 2023 are in Hamilton, New Zealand on 21-22 January and Sydney, Australia on 27-29 January

Samoa put in a brilliant performance to defeat New Zealand 12-7 in a rain soaked men’s final to claim their first title on the HSBC World Rugby Sevens Series since Paris in 2016.

New Zealand dominated arch rivals Australia from early on and came out on top 31-14 in the women’s final to gain revenge for defeat in the Dubai the week before.

Both USA men and women finished with bronze medals around their necks following a 22-14 defeat of hosts South Africa’s men and an equally convincing 20-12 win over Ireland’s women.

The men’s cup final was played in heavy rain so credit to both Samoa and New Zealand’s players for putting on a show.

The Samoans took a slender 5-0 lead into the second half thanks to an unconverted try by Faafoi Falaniko after six minutes.

Two minutes into the second half Brady Rush found some space and scored for New Zealand and when Tepaea Savage converted they were 7-5 up.

Samoa were not done though and a try from Vaa Apelu Maliko converted by Falaniko got them over the line 12-7.

In the women’s final New Zealand came out of the blocks firing and went 7-0 up early on in the wet conditions.

Shiray Kaka was the try scorer with Tyla Nathan-Wong converting and things got better for them when the latter scored a try and added the extras again to make it 14-0.

When Nathan Wong added another try and a conversion before the break it was 21-0 with seven minutes remaining.

Michaela Blyde and Kelly Brazier scored further tries for New Zealand with Madison Ashby and Demi Hayes getting consolations for Australia. The final score was 31-14.

This was New Zealand’s 28th title in the 50th event on the women’s circuit and head coach Cory Sweeney said: “It is awesome, it is hard to put into words. This group stood up and to do what they did in a final was awesome. I am really proud of everyone in the group, this is a special day.”

Nathan-Wong was the HSBC Player of the Final and she added:  “It was an epic performance by the team, it was a bit of a grind this week, but in the final the players found their self-belief and came out and delivered.”

“We’ve been fighting for this one for a while. It’s always been a good trans-Tasman battle. We got so close last week, it was only I think, seven points in it. And we knew even before that, we’ve been so close to them and so to come out here and put a performance like that was amazing, especially with such a young, inexperienced team.”

“We got the gold at the Olympics, the fifteens girls got the World Cup and now we end this year on a high with these girls. We’re just going to carry that momentum into next year and the Hamilton Sevens where it’s going to be a home tournament, so we’re all excited for that. But first things first, enjoy this one, go home, spend some time with our families and loved ones over Christmas and refresh the batteries.”

Samoa were appearing in their first cup final since Las Vegas in 2019 and HSBC Player of the Final  Vaa Apelu Maliko said:  “We’d like to thank our family, friends and all the supporters back home for helping us get through this event, this win is for them.”

“These wet conditions are nothing new to us, it was like playing at home. This is what the conditions are like in Samoa, it could be sunny one day and then pouring rain.”

“I’m very proud of the boys. I can’t put into words what we’re feeling right now.”

The results in Cape Town see Samoa rise to the top of the men’s Series standings with 47 points, ahead of South Africa on points difference, with New Zealand in third and the USA in fourth both on 44 points. Double Olympic champions Fiji currently lie in fifth position on 40 points with reigning Series title holders Australia in sixth on 39 points. Only the top four teams will achieve Olympic qualification from the Series.

The women’s Series standings after two rounds see Australia lead New Zealand on points difference, with both teams on 38 points. USA are in third on 32 points after two bronze medal finishes, followed by France in fourth with 26 points and Ireland in fifth position on 24 points. With France’s place at the Olympic Games Paris 2024 already guaranteed as host nation, the fifth placed team will achieve Olympic qualification should France finish in the top four.

Japan are currently ranked 15th with four points, which is the automatic relegation position, while Spain on 13 points, Canada with 11 points and Kenya on nine points are ranked 12th to 14th respectively, which are the positions that will enter a relegation play-off with the World Rugby Challenger Series champions at the last round of the Series in London in May 2023. Newly promoted Uruguay earned a valuable ten points with their seventh placed finish in Cape Town to move up to 11th position on 20 points, the same as Great Britain who are above them in tenth on points difference.

The HSBC World Rugby Sevens Series takes a festive break before returning in Hamilton, New Zealand on 21-22 January and Sydney, Australia on 27-29 January as the race of Series glory and Paris 2024 Olympic qualification continues.

The men’s pools for Hamilton see Series leaders Samoa in Pool A together with Pacific Island neighbours Fiji as well as France and Kenya. New Zealand are in Pool B with Great Britain, Australia and invitation team Tonga. Pool C includes the USA, Uruguay, Ireland and Japan. South Africa, winners in Dubai last weekend, are in Pool D with Argentina, Spain and Canada.

The women’s pools see Olympic champions New Zealand drawn in Pool A alongside Great Britain, Fiji and invitation team Papua New Guinea. Australia are in Pool B with France, Canada and Japan. The USA will be aiming for their third straight podium finish and are in Pool C with Ireland, Brazil and Spain.