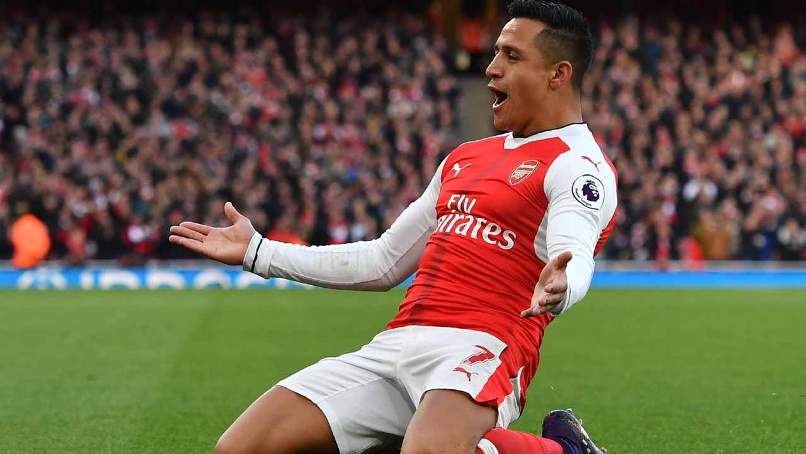 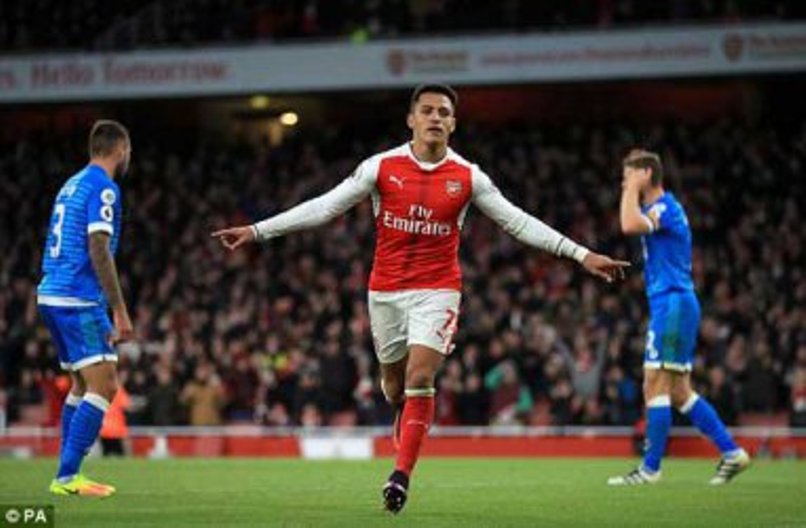 Arsenal closed the gap on Premier League leaders Chelsea as Alexis Sanchez bragged a brace in a 3-1 win over Bournemouth on Sunday.

Arsene Wenger’s side are within three points of top spot after Chile forward Sanchez struck in each half at the Emirates Stadium to take his goal tally for the season to 10.

Sanchez gave Arsenal an early lead before Callum Wilson equalised with a penalty before the interval.

Theo Walcott headed Arsenal back in front just 24 hours after the birth of his second child and Sanchez wrapped up the points.

After drawing three of their last four league games to fall six points behind Chelsea, this was a timely victory for fourth-placed Arsenal, who are now unbeaten in their last 19 matches in all competitions and firmly in the title race.

Even Wenger conceded Arsenal had lost their momentum of late and, in a bid to revitalise his team, the boss made seven changes from the midweek draw against Paris Saint-Germain.

France striker Olivier Giroud dropped to the bench and there was a recall for right-back Mathieu Debuchy, who last played for Arsenal in November 2015.

On-loan Arsenal midfielder Jack Wilshere was ineligible to play for Bournemouth against his parent club, but his absence didn’t stop the visitors sticking to manager Eddie Howe’s philosophy of playing out from the back.

It proved a fatal indulgence in the 12th minute.

Bournemouth goalkeeper Adam Federici rolled the ball out to Steve Cook on the left and instead of knocking it long under pressure, the defender tried a back-pass that was intercepted by Sanchez, who gleefully slotted into the empty net.

Wilshere, watching from the stands, buried his head in his coat as injured Arsenal team-mate Danny Welbeck turned to indulge in some banter with his friend.

Sanchez caused more chaos in the Bournemouth defence moments later with a surging run that ended with contact from Nathan Ake, but no foul was given by referee Mike Jones as Arsenal appealed for a penalty.

If that was frustrating for Arsenal, there was worse to come at the hands of Jones in the 23rd minute when he gave Bournemouth a debatable penalty for Nacho Monreal’s collision with Wilson, who picked himself up to slot home his club’s first ever goal against the Gunners.

Just before Bournemouth’s leveller, Debuchy’s return had come to a premature end when he limped off with the latest in a long line of injuries.

His departure seemed to destabilise Arsenal’s back four and Bournemouth should have taken advantage when Ake headed a free-kick towards the unmarked Adam Smith, who could only direct his header well over.

Arsenal are usually the ones bewitching their opponents with slick passing, but they were getting a taste of their own medicine from Bournemouth as another flowing move gave Brad Smith space for a shot that Petr Cech saved at his near post.

Sanchez tried to restore order just before half-time with a thunderous shot that cannoned back off the crossbar.

That warning shot foreshadowed a more dynamic period for Arsenal after half-time and they regained the lead in the 53rd minute.

Mesut Ozil’s cross was deflected on by Ake to Monreal, who scooped a cross back towards Walcott and the Arsenal winger nodded home from close-range before marking the birth of son Arlo with a ‘rock the baby’ celebration.

Having been embroiled in penalty controversy in the first half, Jones made another dubious call when he denied Bournemouth a spot-kick after Monreal blocked Simon Francis’s pass with his arm.

Bournemouth were finishing strongly and it took a fine save from Cech to deny Benik Afobe, but Sanchez eased Arsenal’s nerves in the 90th minute when he tapped in from Giroud’s cross. – Agence France-Presse