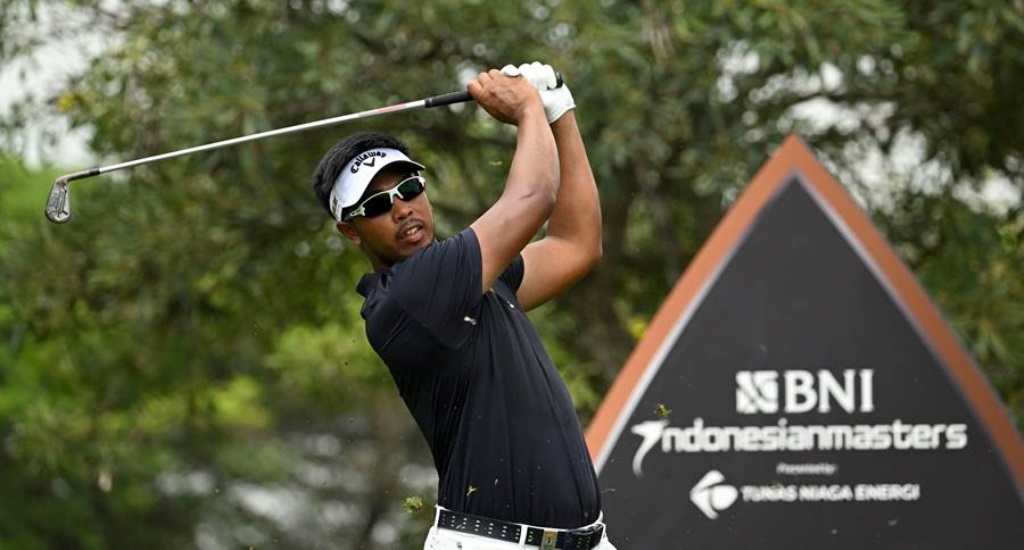 Thailand’s Sarit Suwannarut continued to impress at the US$1.5 million BNI Indonesian Masters presented by TNE today moving to the top of the leaderboard on 15 under after 14 holes before lightning stopped play for the day at 3.09pm local time.

Thailand’s Kosuke Hamamoto is two behind with three to play, while Northern Ireland’s Graeme McDowell is three back with two remaining along with India’s Veer Ahlawat, who has four holes left.

Play will resume at 6.45am tomorrow for what promises to be a thrilling final day that will also see the Asian Tour Order of Merit (OOM) decided, as well as the International Series (OOM) and the top 30 qualifiers for next year’s Saudi International from the Asian Tour’s Merit list.

Sarit, chasing a maiden win on the Asian Tour, started the round sharing the lead with Mathiam Keyser from South Africa, and while Keyser fell back and is seven under for the tournament through 14, Sarit went in the other direction shooting seven birdies and dropping three shots.

England’s Lee Westwood, a three-time winner of this event, made full use of moving day, posting his second successive 66 to reach 10 under and take the clubhouse lead.

Westwood triumphed in 2011, the inaugural addition, 2012 and 2015 and showed some of the form that won him those titles today making five birdies, including on the first three holes, on the front side to go out in five under.

“But it got a little bit tricky towards the end, the wind just picked up a little bit, 17 and 18 played tricky into the wind and out the left. But yeah, played alright and made a few nice putts, and hit some good putts that didn’t go in. I’m pleased with my day, at least we got finished.”

Having opened with a first round 74 the Englishman has rebounded brilliantly and blamed lack of play for his slow start.

He said: “It was a combination of a lot of things, but I had four weeks off coming into this week and hit balls for about three hours. So, you know, I went home did a lot of gym work but didn’t really work on my golf game, so I felt really rusty. I’ve been struggling with a bit of a chest infection and not sleeping great with the jetlag, so didn’t do as much practice over the Monday, Tuesday and Wednesday as I would have liked, and you know just felt rusty and out of sorts. I was four over through 16 but then birdied the last two holes to finish two over and then played well since.”

Victory tomorrow would allow to add a missing item from his impressive portfolio: winning an event for the fourth time.

“I will just keep playing like I played the last two days really; you know hit a lot of fairways,” he said.

“I think this golf course gives you chances if you hit fairways, but as soon as you start hitting it in the rough it becomes tricky. I’ve driven the ball pretty well the last two days and started hitting my iron shots a little bit more consistent.

“And I’ve given myself a lot of chances you know, 14 under for the last 38 holes is really the worst I could have been. I could have shot 10 under yesterday and 10 under today quite easily, so my game is pretty good for beginning of December.”

Current Asian Tour Order of Merit leader Sihwan Kim from the United States is four under playing his last hole with a whole host of permutations for tomorrow.

Chinese-Taipei’s Chan Shih-chang, Thailand’s Jazz Janewattananond, Phachara Khongwatmai, and Sadom Kaewkanjana, Canada’s Richard T. Lee and Scott Vincent from Zimbabwe, are all in contention and need to win tomorrow to have a chance of toppling Kim.

Vincent, who leads the International Series OOM, gave himself an excellent chance winning that title and earning a golden ticket onto next year’s LIV Golf League by firing a 67 to finish the day on eight under.

Round 3 suspended due to thunderstorms. 30 players will resume play on Sunday morning at 6.45am local time.