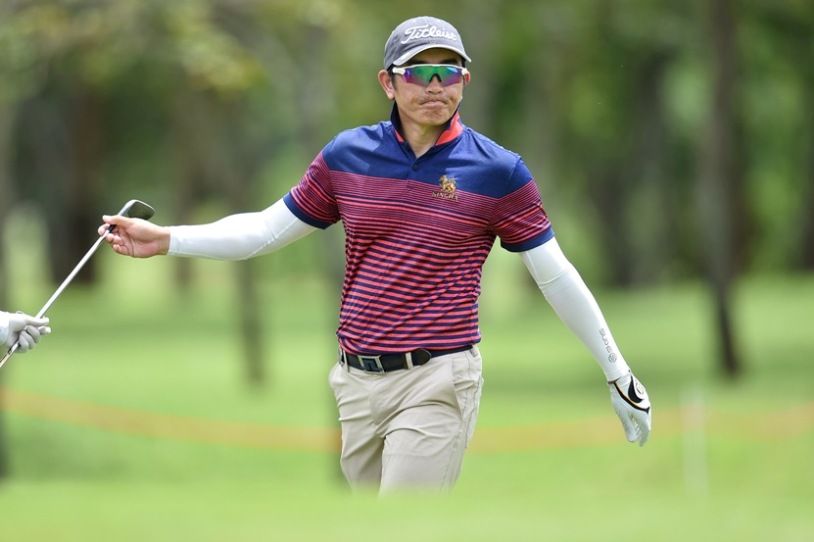 Thailand’s Sattaya Supupramai battled against tough conditions to share the second round lead with Australia’s Terry Pilkadaris at the King’s Cup presented by PTT Group on Friday.

Sattaya was disappointed not to have taken the outright lead after he returned with an even-par 70 while Pilkadaris stormed up the leaderboard with a 67 at the Phoenix Gold Golf and Country Club.

Denmark’s Joachim B. Hansen had his hot putter to thank as he carded a 67 to trail the leaders by one shot in third place at the US$750,000 event.

Chinese Taipei’s Lin Wen-tang enjoyed a welcome boost ahead of his debut at the Olympic Games when he signed for a 66 to share fourth place with South Africa’s Jaco Ahlers and Thailand’s Sutijet Kooratanapisan and Natipong Srithong.

Having played in benign conditions on the opening day, Sattaya was greeted with more challenging conditions when he returned to the tee in the afternoon.

The three-time Asian Development Tour (ADT) winner got off to a good start in his opening back-nine where he posted two birdies for an outward 33.

However he lost his way in his inward-nine with three bogeys and one birdie before posting a two-day total of seven-under-par 133.

“The conditions were very different as compared to yesterday. It was tough in the afternoon as it was windy and the greens were very firm and fast.

“I tried my best already and the only thing I can do is to look forward, not back. I just want to take each round as they come and not get distracted,” said Sattaya.

Pilkadaris, who is hoping to return to the winner’s circle for the first time since his victory in Brunei in 2005, enjoyed a flawless round which was highlighted by three birdies.

“So I haven’t won for a while and it would be nice to get back in there,” said the Australian.

Pilkadaris was rock solid with his iron play and made no mistakes on the demanding greens.

“I just kept the ball in play all day and that was key to my bogey-free round today. I hit it well and didn’t miss much of the greens. Even if I did, it was an easy chip shot back. I’m feeling good.

“I’ve done so much work with my coach on the wedges and short irons and I actually hit them really close to the pins. You don’t have to mark them and just have to tap it in which is always a good thing. That really took the pressure off me,” said Pilkadaris.

Lin, who will be representing Chinese Taipei at the Olympics, enjoyed a welcome boost ahead of his participation at the world’s greatest sporting spectacle.

After an opening 69, Lin resumed his charge with two birdies in his opening three holes on the back-nine 10.

He bogeyed 14 but would mark his card with another two birdies on 15 and 17 despite the windy conditions.

The Olympian went further ahead with birdies on holes three and eight before a bogey on the treacherous ninth hole pegged him back.

“Holes nine and 16 are the toughest holes. You got to be very careful there and like I said, your first shot has to be very accurate to get you closer to the greens.

“The conditions were tougher today as it was very windy. My putting was good but I had some trouble reading the greens. I do not want to put too much pressure on myself. I just want to enjoy my game and catch-up with my friends on Tour,” said Lin.

Major winner Trevor Immelman of South Africa made his early exit from the King’s Cup after he carded a 73 to miss the cut by one shot.

The cut was set at one-over par with a total of 80 players progressing into the weekend rounds.

Leading Scores after round 2 of the King’s Cup being played at the par 70, 6698 Yards Phoenix Gold GcC course (am – denotes amateur):