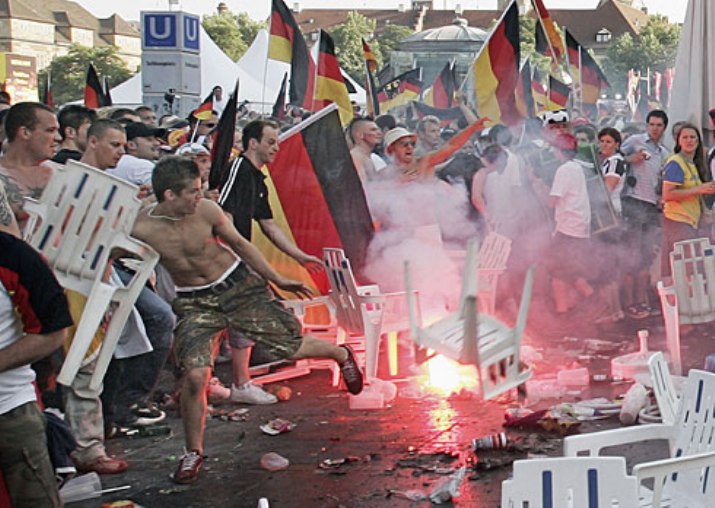 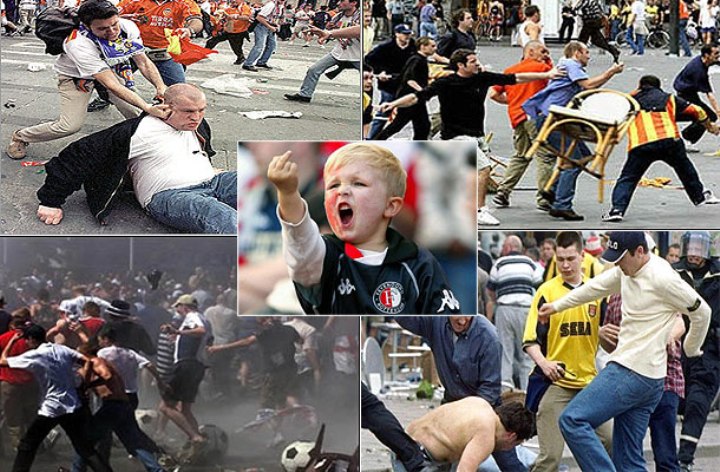 PRAY tell me: What’s happening to football when a frighteningly new generation of ‘schooligans’ have emerged amid growing concern about widespread violence at Euro 2016.

Yes, the little ones are now getting fired up amidst the football violence that’s raging, especially over its widespread publicity on social media.

British police have confirmed that a schoolboy of 12 was among more than 100 under 18s banned from UK football grounds in the past three years, new figures reveal.

At Euro 2016, which started just over a week ago, dozens of England fans were arrested in France after clashes with Russian ‘ultras’, including a 16-year-old in Marseille. The pitched battles were the worst violence at a football tournament since the 1998 World Cup, prompting police to respond with tear gas and baton charges.

Back home, in the ‘Land of Football’ teenagers are said to be sewing ‘casual’ clothing labels associated with hard line gangs in their school uniforms.

I just hope this ugly face of football never ever emerges in Singapore or Malaysia as British cops have found evidence of images glamorising football violence on social media and the younger generation are just attracted to it. Officers are now going into schools to warn of the dangers of getting involved amid fears youngsters do it to ‘look hard’.

Russia and England were even warned by the organisers that they could be disqualified from Euro 2016 if such war-like hooliganism continues.

Police say many are tattooed with nationalist and Orthodox Christian slogans. Others have links to white supremacist far-right groups and, during matches at home, have unfurled Nazi flags and racially taunted black players by throwing banana skins on to the pitch while making monkey sounds.

But are these Kremlin foot soldiers or simply another strain of football hooligans? The speculation and conspiracy theories abound over the behaviour of some Russian football fans following the recent violence in France.

Or are these an ugly copy of Russian foreign policy, asks Professor Sergei Medvedev from Moscow’s Higher School of Economics. Describing the mentality of the Russian hooligans, he said: “We won’t win the championship but let’s at least put on a brave face, beat some people up, and have the whole world talking about us.”

How accurate or how seriously should we take this assessment? Has the behaviour of Russian hooligans in France really been a reflection of the country’s foreign policy? Even more significantly, is it as some suggest, directly linked to political cadres in Russia and possibly orchestrated and manipulated by even higher forces – all the way to government level?

Police intelligence say that the Russian fans involved in last week’s violence, refer to themselves as ‘ultras’, and belong to an organised tradition of hooliganism, which has its roots mainly around clubs in Moscow and St Petersburg. They belong to “firms” modelled on what they view as the 1970s heyday of English football fans’ thuggery. Saint Petersburg FC Zenit ultras are considered to be the most feared, with more than 5,000 local supporters.

In Russia, many of these ultras hooligans are “straight edge,” abstain from alcohol and smoking, and work out regularly to steel their bodies for fighting. They also train together, and practice tactics to be used when travelling to other cities to fight hooligans from other clubs.

My Russian journalist colleagues tell me that during the Soviet era, streets in every city and town across the Soviet Union used to be pervaded by unruly neighborhood youth gangs. Known disparagingly as “shpana”, they weren’t at all like deadly ethnic gangs in American inner cities, committing murders and selling drugs. They were a far less threatening phenomenon, very loosely organised and packing, at most, knives, bicycle chains or brass knuckles. But they were an omnipresent nuisance, a feature of pretty much every apartment building and courtyard.

More worrying, these kids, some as young as 12 and others almost 18, the age at which Soviet males became subject to the military draft, hung out in the back of apartment buildings and at children’s playgrounds after dark, smoking, drinking, pitching pennies and shooting the breeze. It is learnt their favourite pastime was to accost, shake down and beat up teenagers from other neighborhoods who happened to be passing by, which was a concern whenever you went out on a date. Park benches were the typical place to be attacked by a gang of shpana.

Clear evidences show that they engaged in petty crime, hooliganism, vandalism and fighting with similar gangs. For the most part, they would eventually do their military service and settle down, becoming blue collar workers, plumbers or truck drivers. There were some who for one reason or another ended up in young offenders’ correctional facilities or fell in with career criminals.

Some politicians are even fuelling the riotous uproar.  Igor Lebedev, a nationalist who is a deputy speaker in the lower house of parliament and a member of the Russian Football Union’s executive committee, wrote on social media last week. “On the contrary our guys were great. Keep it up.”  He added: “In nine out of 10 cases football fans go to games to fight, and that’s normal. The lads defended the honour of their country and did not let English fans desecrate our motherland.”

Arrogant and inappropriate, as such remarks are, on one level at least they seemed to have tapped into what some see as a genuine interpretation of the violence as part of Russia’s geopolitical stand-off with the West.

What’s more worrying is World Cup 2018, to be hosted by Russia. The big question: Should the World Cup go ahead, when this heavy security will be even more apparent – regardless of Kremlin alleged links with far right hooligans or not.

For some time President Putin has put his country on something of a stand-off with the west and Europe. Just as in the Cold War days when Putin worked for the country’s security service the KGB, sport has become a crucial arena where geopolitical struggles are fought out. To that end the official Russian narrative is either one of ideological victory or of victimhood as a result of external plots.

As long as such a climate exists, so too, will Russian football hooligans and their right wing allegiances. And the fear that “schooligans” may well be the new way of a very serious ugly head rearing its head.