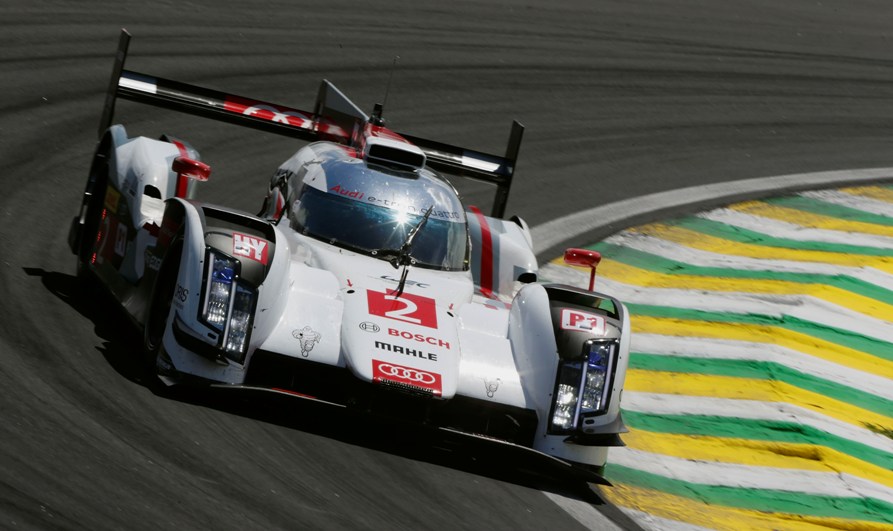 Audi has achieved its best qualifying result of the season?s second half in the finale of the FIA World Endurance Championship (WEC) in Brazil. Marcel Fässler/André Lotterer/Benoît Tréluyer (CH/D/F) in the number 2 Audi R18 e-tron quattro qualified by setting the fourth-best lap time. The trio had last started from the second row at Austin in September, in the fourth of eight races of the season.

On the challenging roller-coaster track at São Paulo, the 2012 World Champions secured the best starting base for the race within the Audi Sport Team Joest squad. The drivers of car number 2 with a combined lap time of 1m 18.889s will start from the second row.

The sister car, designated as number 1, in the last 6-hour race of the season achieved a place on the third row of the grid. With their time of 1m 18.983s Lucas di Grassi/Loïc Duval/Tom Kristensen (BR/F/DK) were only 63 thousandths slower than the fifth-placed Toyota, although the Audi trio only drove its mandatory number of laps in qualifying. As a result, car number 2 will be able to make use of the optimum potential of the Michelin tire set from qualifying. For Lucas di Grassi, the race will be his home round and for Tom Kristensen the farewell race of his long and successful career.

Before the race, the Audi team focused on its race preparation on the 4.309-kilometer track on the outskirts of São Paulo. In the three free practice sessions, the engineers and race drivers extensively tested lap time consistency of the tires across longer runs and were satisfied with the results. Round eight of the season will start on Sunday at 13.00, local time (16.00 CET).

In Germany, viewers can watch the final stage of the WEC race at São Paulo live on Sunday, November 30, from 20.30 to 22.00 on the TV channel Eurosport. Audi reports about all the practice and qualifying sessions and the race on Facebook (AudiSport), Twitter (@Audi__Sport), a news ticker on www.audi-motorsport.info and the Audi Sport App.

Dr. Wolfgang Ullrich (Head of Audi Motorsport): ?The results confirm what we?ve seen in the previous practice sessions. We?re handling the track pretty well and were relatively consistent over the long runs. At the moment, qualifying is no doubt the most difficult part of the weekend for us. I think we?ll be able to deliver a good performance in the race.?

Chris Reinke (Head of LMP): ?The beginning of the weekend was no doubt marked by Tom Kristensen?s farewell. In qualifying, the direct race preparation started for us. We?re happy about the second row and confident that we?ll be able to clinch a good result in the race on Sunday.?

Ralf Jüttner (Team Director Audi Sport Team Joest): ?Qualifying isn?t our favorite discipline this year. But on the long runs, we?re set on leveraging our strengths in terms of tire wear and to advance with both cars that way.?

Marcel Fässler (Audi R18 e-tron quattro #2): ?We were the first in the pit lane. That way we achieved a clean lap. I drove two laps, returned to the pits and handed the wheel over to Benoît. Finishing the qualifying session in fourth place in front of a Toyota is a good starting base. Still, the race is more important than qualifying. I?m pleased with the balance of the car and we?d like to battle for the podium.?

André Lotterer (Audi R18 e-tron quattro #2): ?The result was positive. On Friday, we already handled the track pretty well. Being a little bit further towards the front than in the past races can definitely be of help. Hopefully, we?ll be able to display our strengths in the race.?

Benoît Tréluyer (Audi R18 e-tron quattro #2): ?Qualifying was rough but our car is very good. Although we concentrated on the race set-up we were doing pretty well in qualifying. I?m confident for the race. Our squad did a good job.?

Lucas di Grassi (Audi R18 e-tron quattro #1): ?We again systematically worked on setting up the car for the race. That?s why the qualifying result wasn?t our top priority. We?re looking forward to the finale and believe that we can achieve a good result.?

Loïc Duval (Audi R18 e-tron quattro #1): ?Compared with the past three events we managed to do better in qualifying today. Even though we?re not starting the race from the very front we?re relatively close to the competition. We saw on Friday that we?re fast, particularly on the straights. It would probably play into our hands if the weather on Sunday was a little hotter and drier. The harder the strain on the tires, the better it?ll be for us.?

Tom Kristensen (Audi R18 e-tron quattro #1): ?We fully concentrated on the race and that?s why we only drove very few laps in qualifying. Hopefully, we?ll be strong in the race. We were very close to Toyota in qualifying. Maybe we underestimated that to some extent and should have taken a few more chances.?