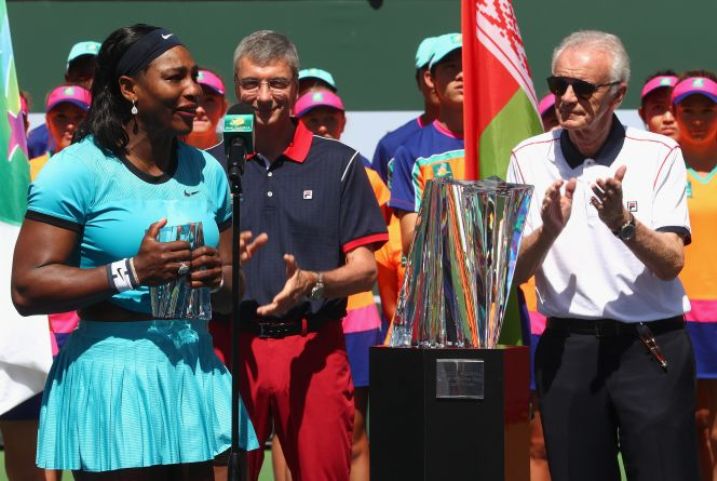 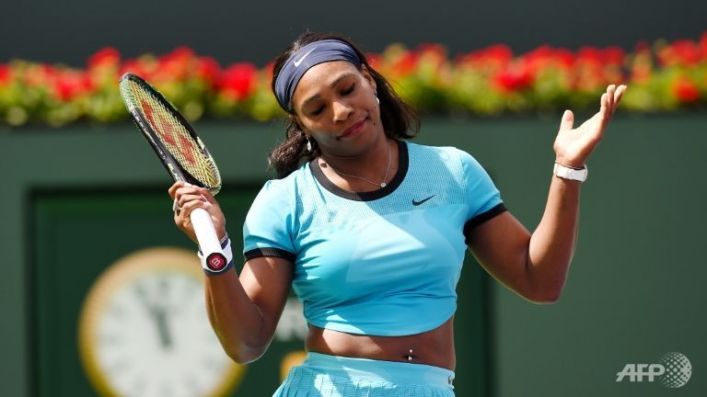 “If I was a lady player, I’d go down every night on my knees and thank God that Roger Federer and Rafa Nadal were born, because they have carried thissport,” Moore, a 69-year-old former player from South Africa, told reporters as his annual state of the tournament press conference on Sunday morning.

Not surprisingly, 21-time Grand Slam champion Williams was scathing in her response.

“Obviously, I don’t think any woman should be down on their knees thanking anybody like that,” Williams said.

“If I could tell you every day how many people say they don’t watch tennis unless they’re watching myself or my sister, I couldn’t even bring up that number,” Williams said.

Williams said she quickly became aware of Moore’s remarks via social media, even though she was busy Sunday morning preparing to meet Victoria Azarenka in the women’s final, which the Belarusian won in straight sets

A swift backlash to Moore’s comments, which also included remarks on the physical attractiveness of some of the WTA’s rising stars, had him issuing an apology even before the men’s Masters final between Novak Djokovic and Milos Raonic was completed.

“At my morning breakfast with the media, I made comments about the WTA that were in extremely poor taste and erroneous,” Moore said in a statement.

“I am truly sorry for those remarks, and apologize to all the players and WTA as a whole.

“We had a women’s final today that reflects the strength of the players, especially Serena and Victoria, and the entire WTA. Again, I am truly sorry for my remarks.”

But Williams said there was no mistaking their meaning.

“You know, there’s only one way to interpret that,” she said. “Get on your knees, which is offensive enough, and thank a man … we, as women, have come a long way. We shouldn’t have to drop to our knees at any point.”

Williams acknowledged that she was surprised to find gender-related controversy continuing to crop up in asport that has pioneered equal compensation for women competitors — sometimes over the objections of their male counterparts.

Williams invoked US great Billie Jean King, a tireless promoter of equal opportunity for women in sport and beyond.

“I feel like that is such a disservice to her and every female, not only a female athlete but every woman on this planet, that has ever tried to stand up for what they believed in and being proud to be a woman.”

Novak Djokovic, fresh from claiming a fifth Indian Wells title on Sunday afternoon, acknowledged that Moore’s comments were “not politically correct” but added the matter “was maybe exaggerated a little bit”.

Djokovic said he has “tremendous respect” for women in tennis, especially as they have to “go through a lot of different things that we (men) don’t have to go through. You know, the hormones and different stuff.”

Azarenka said men rarely find themselves the subject of insulting remarks — whether they were intended as such or not.

“I think it’s something that we have to work through as women,” she said. “Men don’t get those comments.

“I think it’s still a problem in the world,” Azarenka added. “It’s not just in sports. It’s in business. We try to talk about the equality. Sometimes it just gets unrecognized.”

Azarenka, too, referred to King, who responded herself on Twitter saying she was “disappointed” in Moore’s comments.

“He is wrong on so many levels,” King wrote.

WTA Tour chief executive Steve Simon released a statement saying, “As the tournament director of one of the most preeminent events in professional tennis the comments made today by Raymond Moore were extremely disappointing and alarming.

“The WTA stands on its own and was founded on the principles of equality and empowerment. I am proud of all those strong athletes on the WTA who put in hard work and sacrifice every single day.

“Tennis as a whole is enriched by the contributions and accomplishments of every single player both female and male.” – Agence France-Presse