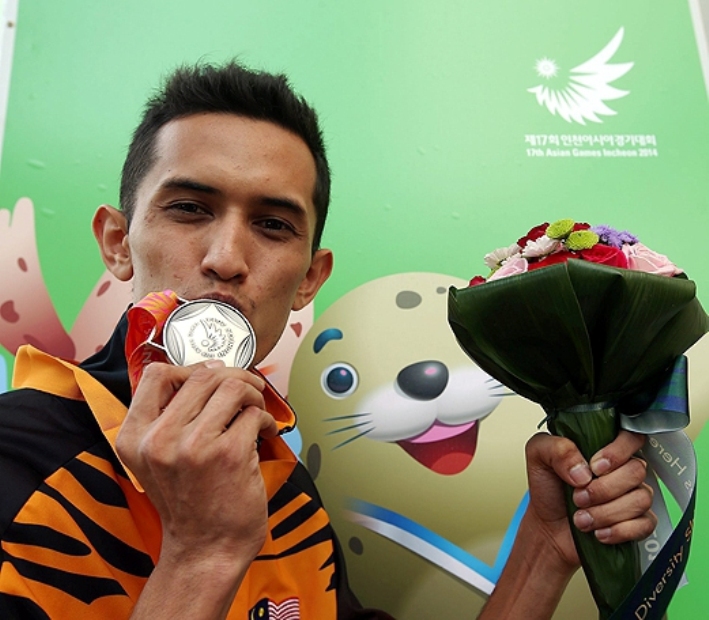 *Nearly quit the sport due to back nagging back injury

There was another silver lining for Malaysia at the Ongnyeon International Shooting Range – this time in the men’s 50m rifle prone on Thursday when Ezuan Nasir Khan narrowly missed the gold by 0.6 points and had to settle for a silver medal

It was Malaysia’s second successive silver at the shooting range. Ezuan’s silver came in the wake of Nur Suryani Taibi’s silver medal effort in the women’s 50m rifle prone on Wednesday. Malaysia also won the team bronze in this event.

Ezuan will certainly remember the 17th Asian Games and his silver medal in Incheon. For someone who nearly quit the sport due to a back injury but decided to stay on because his father Nasir Khan Abdul Rahman believed in the talent his son has in the sport it is certainly a shot in the arm Ezuan.

And Ezuan, who is attached to the navy, had added cause to celebrate his success in Incheon as he barely made into the finals by finishing in eighth place. It was certainly a fairy tale ending for Ezuan who thanked his coach Saidov Isroil for his tireless efforts to make him a better shooter.

The Malaysian shooter garnered 208.5 points for his silver while China’s Zhao Shengdao won the gold with 209.1 points with a new  Asian Games record. The bronze went to South Korea’s Park Bong-duk with 186.6 points.

“There is no denying that I was nervous but I said a lot o prayers and told myself to remain cool. It helped and I am satisfied with the silver medal…although I came within a whisker of landing the gold (medal),” said Ezuan.

While Ezuan celebrated his silver, he remained fully focused on the 50m rifle three positions which will be held at the same venue on Friday.