Home News ‘Son of Singapore football’ is finally back 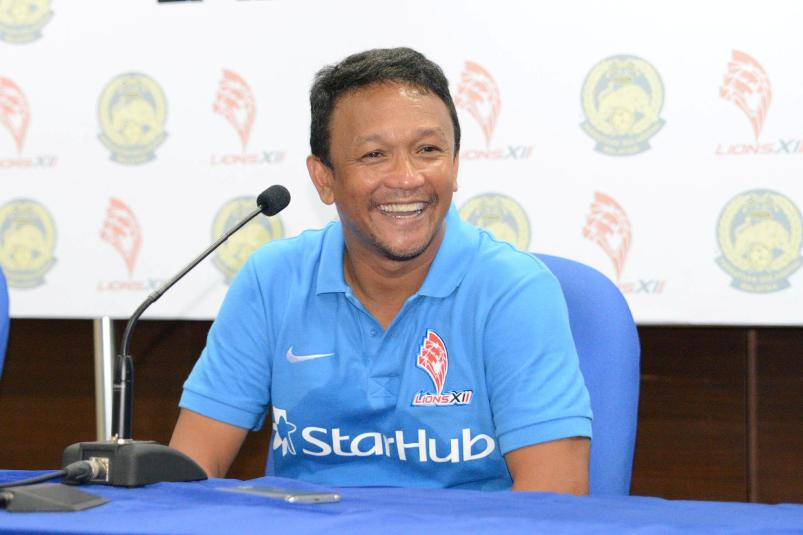 FORTY years ago, he scrambled to speak simple English as a secondary school drop-out. He was an academic “bodoh” (stupid, in Malay). His sporting skills were strictly restricted to his football feet but few envisaged that he’d go on to be the greatest regional role model.

Fandi Ahmad, the “Son of Singapore football” is back.

At 54 years, he has signed an unprecedented three-plus-three-year deal to lead the younger generation to the 2020 Tokyo Olympics.

Let me put on record that this is the boy, when he was just 12, who told his famous father, former national goalkeeper Ahmad Wartam, and mother Semiah Ismail, that he was simply born to play football!

Now, never before in FAS (Football Association of Singapore) history has any coach, foreign or local, ever won a long-term blessing to oversee the development of the youth teams, first bound for the 2018 Asian Games, as well as the 2019 SEA Games in the lead-up to the 2020 Tokyo Olympics.

And this extraordinary task lands on the feet of a “kampong boy” (village lad, in Malay) from Kaki Bukit, who in the late-1970s showed that he’d rise not only to be an exemplary role-model but also Singapore’s most outstanding global football ambassador, first-ever to play professional European football with Holland-based FC Groningen.

“It’s a dream come true to be entrusted with this youth development project as I’ve always believed that I can inspire a lot more youngsters to believe that they can follow the ‘Fandi Ahmad’ dream,” said Fandi, who is currently assisting national head coach V. Sundramoorthy in preparing the Lions for the upcoming Asean Football Federation Suzuki Cup.

“I had several good offers from around the region, but the opportunity to shape youth development in Singapore was too good to refuse. In fact, work for me had already started before the contract was signed. I’m raring to go and really look forward to the challenge.”

In terms of dollars and cents, he could’ve gone across the Causeway with a lucrative deal with Malaysian side Pahang FA.  Fandi enjoys a cordial relationship with the Pahang royal family, where he spent two seasons playing in the early 1990s. The former Johor Darul Ta’zim (JDT) and LionsXII boss also occasionally features in exhibition matches and functions organised by Pahang.

Behind the boardroom scenes, there was uninspiring talk that Fandi couldn’t amicably fit into (newly-minted Belgium technical director) Michel Sablon’s longer-term plans as he abruptly turned down an earlier proposal to coach the Young Lions in the S-League.

Indeed, along the corridors of Jalan Besar Stadium, inside sources said that after failing to see eye to eye with Sablon on what role he should take on if he is to renew his contract, which ends in November, Fandi looked certain to leave Singapore – a scenario the FAS big-wigs could ill-afford because of his cult-figure status with the younger generation.

More so with the much-postponed FAS annual general meeting at the door-step, the boardroom pundits had to somehow give way to appease the grassroots, who may well throw further brickbats should Fandi go overseas.

But, well-informed FAS sources said that in an extraordinary extra-time deal, few believed would ever materialise, both parties had a series of meetings on this last month before the FAS eventually agreed to meet most of Fandi’s demands.

Deep down, as Fandi confessed, “my heart and soul have always been with Singapore” and now, he intends to put his money where his mouth is, brushing aisde questions over dollars or ringgits, to dedicate another four years to lift the sagging fortunes of Singapore, now ranked a shoddy No 157 in the FIFA global charts.

Fandi’s coaching track record stands out, right from the grassroots. The former national football captain had also previously coached the Young Lions, then the national Under-23 team, from 2003 to 2006, leading them to two third-placed finishes in the S-League – their best-ever showing. He rejoined the FAS in late 2013, succeeding current national caretaker coach V. Sundramoorthy as coach of the now-defunct LionsXII. He also led the team to victory in the Malaysia FA Cup.

Hugely popular and highly-respected in the Lions’ dressing room, Fandi, who was also decorated “S-League Coach of the Year”, has played a crucial role in the development of the younger national players like Gabriel Quak, Madhu Mohana, Izwan Mahbud and Faris Ramli.

FAS Vice-President Edwin Tong saluted Fandi for his exemplary loyalty as a Singapore legend and hailed him as a rousing role model to fire up the younger generations.

“I see a serious need to place greater emphasis on youth football, and I see Fandi’s appointment as one of the key planks on which we will build on our youth development programme,” said Tong, a Member of Parliament for Marine Parade GRC.

“One of the purposes behind the time that we took was to ensure our objectives and our interests and also our visions and goals were in line. We agreed for Fandi to take on the position as the Head Coach, Youth, where he will oversee, nurture and identity youth talents and use that platform as a basis to then make the bedrock for the national team in time to come.”

Football analyst Neil Humphreys rates Fandi as a global icon, along the lines of Singapore’s version of Bobby Moore, a “sporting giant whose fame transcends the local game itself, a Singaporean footballer without peer and a gentleman beyond compare”.

In arguing for a longer-term role for Fandi, he recently wrote: “Malaysia admires him, Indonesia respects him and Groningen remembers him. Singapore, on the other hand, still isn’t entirely sure what to do with its finest football son.”

In my view, Fandi has distinctly turned the tables over his critics, especially with the entry of Sablon and his foreign-based team, to show that the “Son of Singapore” still has the blessings of the football fraternity. Now, French-born national youth coach Richard Tardy will remain in charge of the 13- to 18-year-olds, while Fandi will work with those aged 18 to 23 in his new role – a football stroke of genius few ever expected.

I’ve covered the football escapades of Fandi over four decades, right from his Lion City Cup debut in 1977, when I started my journalism career. And I dare say he’s the only local footballer that still triggers a flicker of rousing recognition among every race and age group, from Jurong to Joo Chiat, Tampines to Telok Blangah and Changi to Choa Chu Kang.

He’s the Made-in-Singapore mentor of a “kampong hero”, with minimal academic qualification, who proved that his football boots were worth, in monetary terms, to the Doctorate or Masters academic qualifications. He flirted with clubs such as Boca Juniors and Ajax Amsterdam before signing for FC Groningen in 1983 on a two-year contract, becoming the first Singaporean to play for a European club professionally.

And more importantly, his fluency of English and his fast-growing global diplomatic skills made him a superlative home-grown “bola” perfectionist. Unconsciously, he was capable of raising the hearts and souls from football fields, in classrooms to community centres, even in the print, broadcast or social media.

I will go on record to say that he’s an outstanding bridge between the football’s Malaya and Malaysia Cup heydays of the 1950s and 70s onwards and perhaps a brighter future for a struggling game today.

The behind-the-bushes critics even mocked that Fandi’s European success with FC Groningen was probably a flash in the pan and that he couldn’t rise to dazzling heights as a role model because he  wasn’t a natural communicator, particularly in English, which probably only adds to the reluctance to make him the public face of the sport he graced with such distinction for three decades.

Now, he has debunked his worst critics with this extraordinary longer-term contract. Indeed, he has a lot to show, too, that a genuine “Son of Singapore” can lift the flagging football spirits if the FAS seriously spearhead a sincere longer-term plan to groom the future generations of Fandi Ahmads.

There’s only one Fandi Ahmad.

Let me reiterate that this is the paladin-styled boy, when he was just 12, who told his famous father, former national goalkeeper Ahmad Wartam, and mother Semiah Ismail, that he was simply born to play football.

And, imagine, if this paragon from the village of Kaki Bukit shows that he cannot make a lifelong career out of local sport, what chance does every other heartlander kid, who relish kicking a simple ball along the void-decks, have?

Give credit where it is due: I applaud the FAS for getting a rare decision absolutely right in convincing Fandi to stay.

The ball is now on the feet of this “kampong boy” to fire up the hearts and souls of thousands of multi-racial younger Singaporeans, right at the grassroots, that there’s really some future in knocking on the doors to a professional football career.

And, in the process, churn out a lot more Fandi Ahmads, perhaps academically not-so-smart, but who can use the lower parts of their body to rise on to glittering football heights.