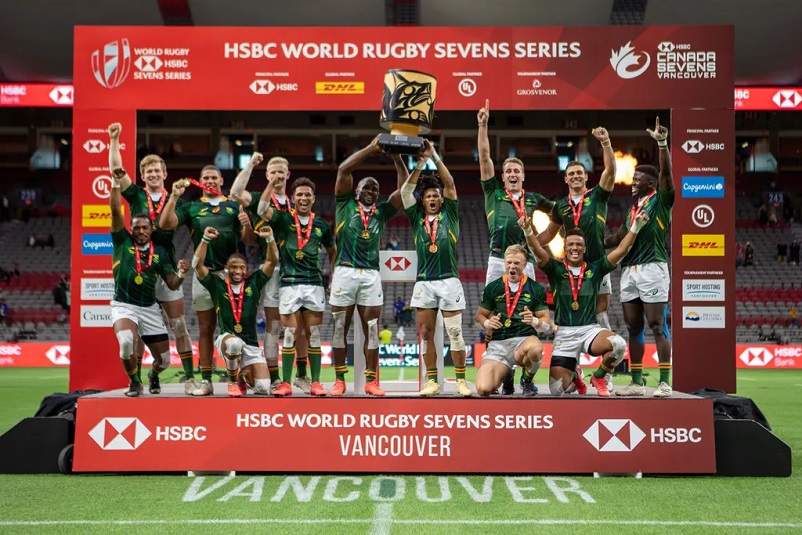 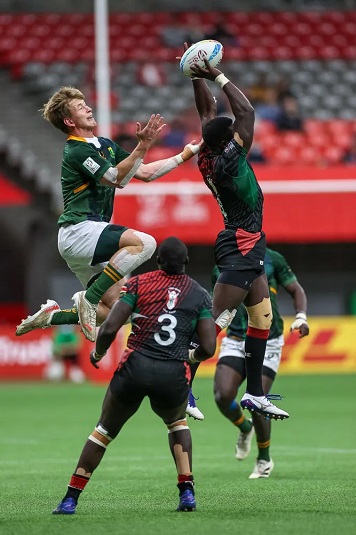 South Africa’s love affair with Vancouver continued as they followed up their 2019 tournament win there with another title.

With a strong contingent of Olympians mixed with some new faces in their squad, the Blitzboks went into the opening round of the HSBC World Rugby Sevens Series 2021 as one of the favourites to lift the trophy and they lived up to expectations with some scintillating rugby throughout, capped by a record 38-5 win over Kenya in the final.

South Africa maintained a perfect win record throughout the weekend after topping their pool with three victories on Saturday and beating Spain 54-5 and Great Britain 26-12 on route to the final.

Great Britain claimed the bronze medal on their Series debut after a 24-14 win against Ireland. The teams had drawn 7-7 in the pool stages but the result of the rematch was never really in doubt after Great Britain raced into a 17-0 lead.

In the play-offs to decide finishing positions outside of the top four, there was disappointment for the hosts in the fifth-place decider as Canada lost to rivals USA for the second time in the tournament.

Hong Kong’s first series tournament outside of Asia in 14 years ended with a deserved seventh-place finish. Germany finished the tournament strongly with three consecutive victories, improving their record winning margin in each as they finished ninth. Meanwhile, Chile claimed 11th-place with a 34-0 victory against fellow invitation team Mexico.

South Africa coach Neil Powell said: “It was amazing just to be out there playing again especially in front of a great crowd. It was great to have two African teams in the final and it’s always a fierce encounter with Kenya.

“I’m really proud of the boys, there’s a lot of youngsters who are the next generation of Springboks sevens and they’ve done really well. It was a team effort and they implemented their responsibilities really well. We now move on to Edmonton where we start all over again.

“This is the start of a new cycle working towards the Paris Olympics and these boys will form the core of that group which will hopefully take us to the get a medal at the Olympics in 2024.”

South Africa’s Ronald Brown who was named HSBC player of the final said: “We were very excited coming in to this tournament because we’ve missed so much rugby. You could see it on the field, the guys were so eager to throw the ball around again and be out there enjoying every moment.

“It’s obviously a great opportunity for the new guys coming in to the system and I think we left our mark, we did incredibly well as a young team this weekend.” 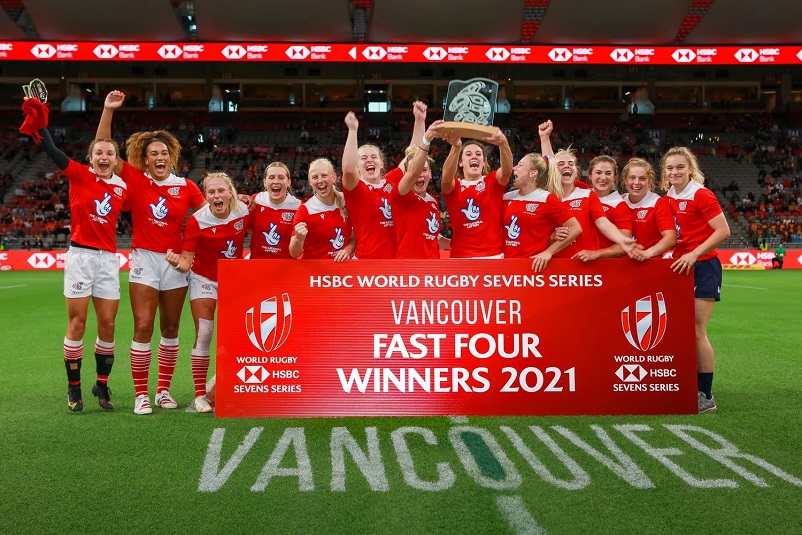 Great Britain were the dominant force in the women’s fast four tournament as they bounced back from their fourth place finish at the Tokyo Olympics to record five consecutive victories and be crowned champions in Vancouver.

Jasmine Joyce cemented her reputation as a sensational finisher and a player for the big occasion with a hat-trick of tries and a player of the match award in a free-flowing final against USA which ended in a 34-12 victory for Great Britain. Great Britain had earlier secured a 43-0 semi-final win against Mexico to book their place in the final.

Having been beaten 29-12 by USA in the semi-final, crowd favourites Canada found themselves in the third-place decider against Mexico which they duly won 48-0.

Great Britain captain Abbie Brown said: “These performances show a lot about our heart and our grit as a squad. It was an exciting week and we get to back it up again next week in Edmonton. To come out and do one performance is good, but to back it up consistently five times is great. We’re getting better with every game and really clicking as a squad.”

Great Britain’s HSBC player of the final Jasmine Joyce said: “It’s been brilliant to play in front of a big crowd here and the young girls who’ve come in to our team really stepped up and we’re really proud of everyone. I score the tries while everyone else does the hard work, so it’s a privilege to play with them and we’re absolutely buzzing.”

All 12 men’s and four women’s teams now move across Canada to the Commonwealth Stadium in Edmonton for the second and final round of the HSBC World Rugby Sevens Series 2021 on 25-26 September. – www.world.rugby