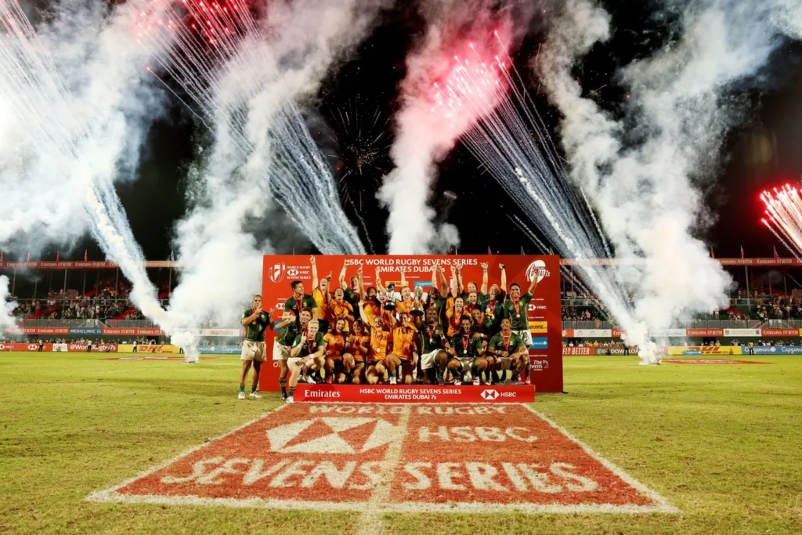 South Africa men and Australia women were once again too hot to handle in Dubai as they repeated their gold medal triumphs in style in round two of the HSBC World Rugby Sevens Series in front of an electric atmosphere at The Sevens Stadium.

The men’s final was a nail-biting affair as South Africa found themselves 7-5 down to Australia at half-time, but a crucial second half try from JC Pretorius gave them a hard fought 10-7 victory.

Australia won the women’s event for the second weekend in succession with a composed 15-5 final triumph over Fiji as the 2016 Olympic Champions appear to have returned to their top form.

It means that both teams have won the two rounds hosted in Dubai in November and December and head into 2022 as top contenders for the Series crowns.

South Africa skipper Siviwe Soyizwapi got them off to the perfect start in the final when he scored in the first minute. However, Australia got back into things when Corey Toole showed brilliant pace down the left to level the scores up at 5-5. Dietrich Roache converted and Australia were 7-5 up at half-time.

The match winning moment came with three minutes to go when JC Pretorius secured a crucial turnover from Billy Meakes and 60 seconds later he was taking a leading role in attack, scoring an unconverted try to take South Africa into a 10-7 ahead which they held on to until the final whistle.

South Africa captain Siviwe Soyizwapi said: “It’s an unbelievable feeling and takes us back to all the hard work we put in at home to prepare us for these tournaments and this is a good reward going in to Christmas with these victories.

“Australia really took us the wire, it was a brilliant match. Credit to my boys though, we battle so hard for each other and showed grit when we had to. It is such a great way to end 2021.”

“These boys really play with heart, no one can buy that, it comes from within and it’s in our mindsets. We are part of an awesome system and the heart shown by these boys is incredible. The crowd really brought so much atmosphere and energy to the stadium.

HSBC player of the final JC Pretorius said: “We just gel so well as a group and never give up, that is the key.”

Earlier Argentina made it two men’s bronze medals in two weeks as their two speedsters – Marcos Moneta and Luciano Gonzalez – led them to a 38-21 victory over France.

Great Britain defeated Kenya in the fifth place play-off to end up in that spot while USA were seventh. Fiji finished ninth after defeating Spain 31-7 in that play-off and Japan finished 11th.

In the women’s competition the large crowd of more than 35,000 inside The Sevens Stadium were treated to a thrilling contest as Australia captain Demi Hayes led her squad to another gold medal after a pulsating final against Fiji.

HSBC Player of the Final Faith Nathan gave Australia the lead with an unconverted try three minutes before the break. Nathan then set-up Madison Ashby for a crucial second unconverted try to make it 10-0 after seven minutes.

Fiji knew they needed a strong start to the second half – and they certainly got it as Reapi Ulunisau scored a five pointer less than a minute after the interval and when Lefau-Fakaosilea was yellow carded for Australia with four minutes to go things had got very interesting. However, it was Australia who managed to score next as Ashby went over for an unconverted effort to make the final score line 15-5 as Australia celebrated a perfect record in Dubai.

Australia captain Demi Hayes said “I feel really stoked and so proud of the team who have worked so hard. Winning back-to-back is harder but we had one goal in mind this weekend and that’s exactly what we did. It was amazing to have the crowd back, it’s the first time we’ve experienced it since 2019 so we were so happy to feel the support. We will have a little Christmas break but then get straight back into it and be ready for Spain.”

It was a repeat of last week’s bronze medal match in the women’s competition as France took on Russia – and in the end the result was the same too as Olympic silver medallists France ran out 28-5 winners to give them yet another podium finish.

Elsewhere, USA edged out Spain 7-5 – Alena Olsen’s conversion proving crucial – in the fifth place play-off. Ireland defeated Canada 26-12 to secure seventh place while, after a tremendous tussle with Great Britain, Brazil finished ninth with a thrilling 26-24 victory. In that play-off match Brazil’s Thalia Costa led the way with two tries and finished the tournament with six tries, a Brazilian record and a marker of the South American’s impressive improvement.

The Series moves on to Spain in January when rounds three and four will be hosted in Malaga and Seville on 21-23 and 28-30 January respectively as the Spanish cities welcome the Series for the first time.

The pools have already been confirmed for the Malaga event, which is set to include all core Series teams as New Zealand and Samoa return and Great Britain split in to the home nations of England, Scotland and Wales as we enter Commonwealth Games year. Poland will join the twelve team women’s event as the invitational team.