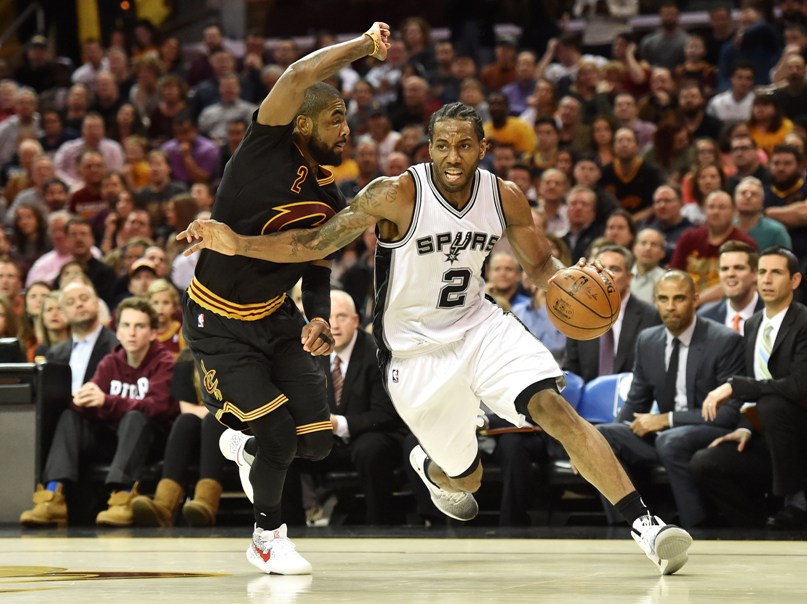 Kawhi Leonard scored 25 points and left to a standing ovation Monday as the San Antonio Spurs humbled the NBA champion Cleveland Cavaliers 103-74 less than three weeks before the start of the playoffs.

The late-season glamour match-up in San Antonio fizzled as the Spurs took control in the first quarter thanks not only to stars like Leonard and LaMarcus Aldridge but also to stellar play from their reserves.

Adding to the misery for Cleveland, Cavs superstar LeBron James took an elbow just above the shoulder blades from Spurs David Lee in the waning seconds of the third quarter that sent him slumping to the court.

He stayed there for several scary minutes before making his way to the bench and with the Cavs trailing 81-58 going into the fouth quarter didn’t return to the court.

“I’m fine,” he said after the game, vowing to be ready for the Cavs’ next game on Thursday at Chicago.

James scored 17 points before departing, but the Cavs endured their ninth defeat in 15 games in March.

The Cavaliers connected on just 37.3 percent of their shots from the floor and for the first time since November 2015 fell out of first place in the Eastern Conference as their record fell to 47-26. The Boston Celtics now lead the East at 48-26.

James said the seeding for the playoffs was not a major concern.

“I want us to be playing better basketball,” James said after the Cavs were held to a season-low points total. “That’s what it comes down to.

“San Antonio is a well-oiled machine and they exploit anything you are not doing well,” he added. “At this point in the season we just aren’t playing good basketball. It’s frustrating right now, but we are a veteran ball club and we will work through this and get things together. We’ve been like a rollercoaster all season long and we have to get things right.”

The Spurs posted their  fifth straight win and at 57-16 pulled within two games of the Golden State Warriors in the race for the best record in the league and the Western Conference lead.

Pau Gasol scored 14 points and Manu Ginobili chipped in 12 for the Spurs, who host the Warriors on Wednesday.

While the San Antonio crowed was geared up for a playoff-caliber contest, the Spurs soon took all suspense out of the proceedings, using a 17-8 run over the final half of the first quarter to take a 28-18 lead.

“We had a really good night defensively — everything came from that,” Spurs coach Gregg Popovich said.

Oklahoma City’s Russell Westbrook drained a pull-up jump shot with 7.1 seconds remaining to cap the Thunder’s thrilling comeback for a 92-91 victory over the Mavericks in Dallas.

Westbrook scored 37 points — 16 of them in the fourth quarter — with 13 rebounds and 10 assists for his third straight triple-double and his 37th of the season.

Although Oklahoma City were down much of the contest, they finished on a 14-0 scoring run — Westbrook posting a dozen points in the surge to victory.

“I guess I just come out and compete every night,” Westbrook said. “I just try to find ways to help my team win and always keep a ‘never quit’ mentality and always keep it going.”

DeMar DeRozan led the Raptors with 36 points. Coy Joseph added a double-double for Toronto with 15 points and 13 assists.

The New York Knicks dealt the Detroit Pistons’ playoff hopes a blow with a 109-95 victory.

Kristaps Porzingis scored 25 points with eight rebounds and three blocked shots for the Knicks. Carmelo Anthony, back from a two-game injury absence added 21 points and Derrick Rose scored 27. The defeat dropped the Pistons 1 1/2 games behind the Miami Heat for the eighth and final playoff spot in the East. – Agence France-Presse