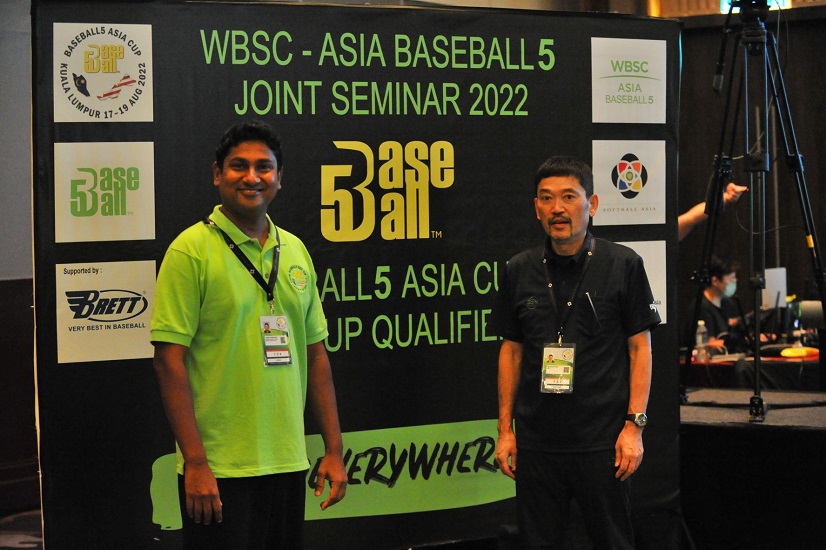 SRI LANKA’s Sujeewa Wijayanayake, is making heads turn at the ongoing Baseball5 Asia Cup (World Cup qualifier) as he is listed with Japanese delegation as their official umpire.

The 39-year-old further caught the attention of players and coaches in the tournament as he converses fluently with his Japanese team officials and players and acts as an interpreter too.

When approached Japanese delegation leader, Yuji Nagakubo, who is also the secretary-general of the Baseball Federation of Japan, explained that Wijayanayake was a utility man to the team.

“He is half Japanese and half Sri Lankan,” laughing loudly.

“Wijayanayake is our official umpire, an official in our delegation and interpreter,” said  Nagakubo who was a former editor of a weekly baseball magazine for 25 years before being involved with the Federation 13 years ago.

Wijayanayake’s link with Japan, started 17 years ago when he went to study at the Ritsumeikan Asia Pacific University in Oita Prefecture in Kyushu Island.

After graduating in Asia Pacific Studies, he found employment with the Sri Lanka Business Council of Japan, which is affiliated with the Embassy of Sri Lanka in Tokyo.

“I graduated in English medium but studied Japanese as it was a matter of survival for me.

“I was playing baseball in Sri Lanka at the college level and was hoping to continue at a higher level in Japan while studying there, but while I made my University after much struggle, the standard was high and decided to be involved in the game I love, as an umpire,” said Wijayanayake.

“I was already umpiring in Sri Lanka after doing a course in 2002 and did some coaching at High School Level in Japan, before deciding to fully concentrate on becoming a full-fledged umpire,” said Wijayanayake who hails from Colombo.

Wijayanayake got his International Umpire’s badge from the International Baseball Federation in 2016 and has gone to umpire at the 2014 Women’s World Cup, 2019 U18 World Cup and this year’s U12 World Cup.

His involvement with Baseball5 started after he went as Deputy technical operations manager for the Baseball/Softball at the Tokyo Olympics last year and attended the Baseball5  10-day promotion during the Para Olympics in Tokyo.

“It was the beginning of my interest in Baseball5 and was involved with the Japanese Baseball5 League and now I am here.”

Nagakubo said Wijayanayake may be of Sri Lankan origin, but he has done Japan proud.

“We are here to finish among the top three and qualify for the World Cup and we are bent on achieving it and that will another proud moment for us,” said Nagakubo

Japan is represented by their National Baseball5 League champions – 5 Stars.

Japan have qualified for the semifinals as the runner-up team after the Super Rounds today after having won the carried forward win over Hong Kong from the preliminary round (6-2;10-0), beat Singapore 10-0, Malaysia 15-0, Korea 15-0 and narrowly lost to Chinese Taipei 1-3.

“We came here with the League champion as we had little time to select and prepare a team. But they are an all-around good team and have done well,” said Nagakubo.