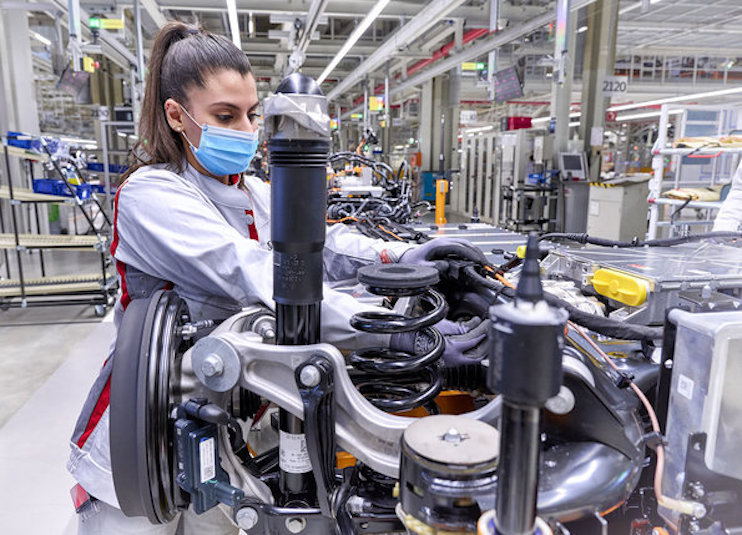 Carbon-neutral production at the multi-brand plant in Zwickau

Audi goes “back to its roots”: In Zwickau in Saxony, the birthplace of this long-standing German company, production of the Audi Q4 e-tron has finally started. The fully electric compact model is the first electric SUV to be produced by Audi in Germany.
The Q4 e-tron features a Volkswagen-made modular electric drive matrix (MEB), a highly versatile and variable platform that is suitable for numerous fully electric models and offers considerable scope for leveraging synergies.
At the multi-brand plant in Zwickau, the Audi Q4 e-tron will be rolling off the same production line as the Volkswagen ID.4 and, in the future, another Volkswagen model. Here, 1,400 assembly line employees of Volkswagen Saxony are also producing the compact electric SUV, which, thanks to the MEB interior architecture, offers spaciousness on a par with the full-size class.
Working alongside their colleagues from Volkswagen, more than one hundred Audi employees prepared for the start of production – from production planning and technical development through to quality assurance. The press tools for producing the body parts all come from Audi’s very own toolmaking shop.
With its expressive design, the Audi Q4 e-tron poses enormous challenges when it comes to precision and surface perfection. Audi toolmakers from Ingolstadt and Neckarsulm were involved right from the initial development stages. The process of trying out the press tools, which weigh many tons, also took place in Audi plants.
Peter Kössler, AUDI AG board member for Production and Logistics: “The cross-brand collaboration in Zwickau demonstrates once again the enormous synergy potential that we enjoy with the Volkswagen Group. The on-schedule start of production of the Audi Q4 e-tron is testament to the outstanding teamwork – among the Volkswagen and Audi colleagues alike. Our compact electric SUV is unmistakably a true Audi that will wow our customers with its outstanding quality and everyday usability.”
Dr. Stefan Loth, Chairman of the executive management of Volkswagen Saxony: “With the start of production of the Audi Q4 e-tron, the Volkswagen plant in Zwickau is now a multi-brand plant. As a result, we are writing yet another chapter in the long history of the automotive industry here in Saxony. I’d like to thank all the Audi employees who are currently manufacturing the vehicles to the very highest quality, in the agreed-upon volume, and on schedule.”
Zwickau and the Audi brand enjoy a long tradition: The Audi car plants were established here in 1909. The Volkswagen plant there has been converted to an all-electric plant and is now an integral part of the Group’s electric offensive.
Back in November 2020, more than 200 Audi employees – mainly junior employees who have successfully completed their vocational training – were temporarily deployed to Volkswagen Saxony in Zwickau for a twelve-month stint.
As part of a “human resources hub,” they will be given the opportunity to boost their skills and expertise in the pioneering field of electric mobility.
The Audi Q4 e-tron will be unveiled to a global audience in the middle of April and launched on the European markets in the summer of 2021. As a result, the Audi brand’s electric offensive continues to pick up steam. By 2025, Audi plans to launch more than 20 fully electric models and expand its PHEV offering.
The two main Audi plants in Ingolstadt and Neckarsulm are also set to manufacture fully electric vehicles: So beginning in 2022, the first electric model based on the Premium Platform Electric (PPE) – developed jointly with Porsche – will roll off the Ingolstadt assembly line.
The Audi Q4 e-tron is being launched in the highly attractive and growing market segment of compact SUVs. For Audi customers, it offers an entry into the world of electric premium mobility at an attractive price.
Not only does the compact model offer almost as much space in its interior as a full-size SUV, but the display concept featuring an optional augmented-reality head-up display is also pioneering in its class.
Production of the Q4 e-tron will be carbon-neutral right from the start. The Zwickau plant covers its entire energy needs using renewables and has a highly efficient combined-heat-and-power plant.Audi is also working to further minimize CO2 emissions in the value chain.
When the Audi Q4 e-tron reaches the end of its life cycle, its battery is to be used in second-life concepts or recycled as a source of raw materials.