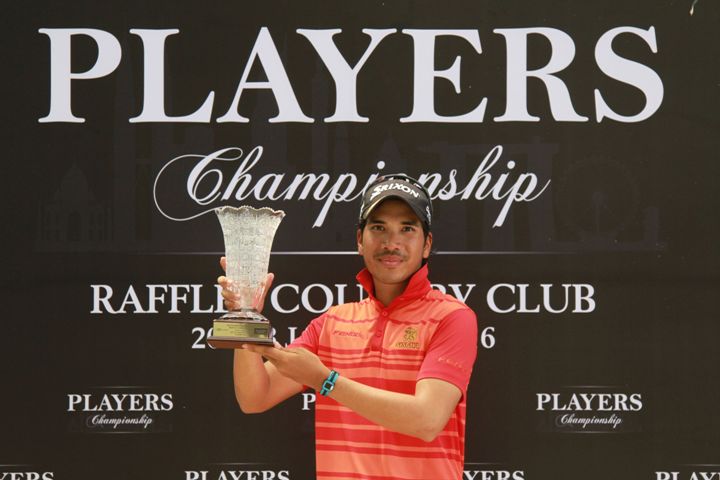 Thai youngster Itthipat Buranatanyarat rounded off a superb week after closing with a six-under-par 66 to win by three shots for his second Asian Development Tour (ADT) title at the US$100,000 Players Championship on Saturday.

The victory also earned him a prized spot at the US$1 million SMBC Singapore Open which will be played at the Sentosa Golf Club’s Serapong course from January 28 to 31 next week.

Quincy Quek and Choo Tze Huang emerged as the highest-placed Singaporeans in tied-11th place on 277 following rounds of 68 and 70 respectively at the Players Championship, which is the first ADT event to feature in the lion city since the burgeoning Tour was inaugurated in 2010.

Starting the round with a one-shot deficit, Itthipat opened with three straight birdies to take over the lead from overnight leader Tirawat. He dropped a shot on fifth but recovered strongly with another three consecutive birdies from eighth before sinking another birdie on 15.

“I got off to a really strong start. That gave me quite a bit of confidence heading into the round. I told myself to stay calm and not get ahead of myself out there. I just stick to my own game plan. I am very happy with my win and very excited to play on the Asian Tour next week. It’s a very good opportunity for me,” said Itthipat, who is nicknamed ‘Boom’.

Itthipat, who won his maiden ADT win last April, had earlier gave the Asian Tour Qualifying School a miss after deciding to focus on honing his skills on the region’s burgeoning Tour.

“I think I am not ready to play on the Asian Tour yet. The ADT is a very good platform for me to improve my game. There are a lot of good players here. I thought I should give myself another year to play on the ADT first and moving on to the bigger Tour. But having said that, I think it will be a very good experience for me next week,” added the young Thai.

Suradit made up for the disappointment of missing out on his Asian Tour card at the Qualifying School last week after capping a runner-up finish in what is his first ADT event outside of Thailand.

“I am very happy with how I played. My tee shots and approach shots were very good today. I had a solid week. This is my first time in Singapore and I love it here. It has been a really memorable week. I am looking forward to the next ADT event in Malaysia already,” said the 17-year-old Suradit.

Lascuna hailed the strong standard of play on the ADT after closing with a solid round of one eagle and five birdies against two bogeys.

“It’s been a really enjoyable week. I am very impressed with the strong playing standard of the players on the ADT. There are a lot of good and young players out here. It’s very competitive but it’s great to see how these players have grown from playing on the ADT. There is definitely a lot of players to watch coming out from the ADT,” said the 45-year-old Filipino.