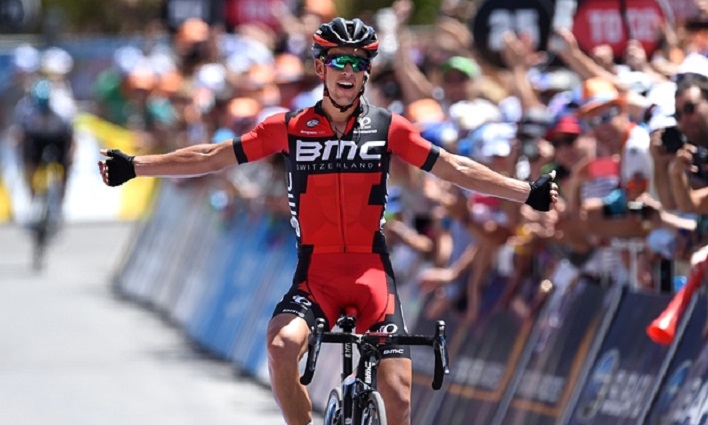 Richie Porte powered his way to win the fifth stage of the Tour Down Under on Willunga Hill Saturday as fellow Australian Simon Gerrans consolidated his hold on first place overall.

The fifth stage of the Tour Down Under, with two ascents of Willunga Hill, invariably produces the most exciting racing of the week and generally decides the overall winner.

It was no different Saturday as Porte made his move with one kilometre of the second climb remaining, breaking away from the peloton and holding off a desperate Henao and Canadian Michael Woods (Cannondale) to win in front of thousands of fans.

“The crowd was incredible — it does feel like riding the Tour de France up this hill,” Porte said.

Gerrans trailed in 17 seconds behind the winner but his overnight advantage of 36 seconds over Porte was enough to ensure he takes the ochre leader’s jersey into Sunday’s final stage, a 90-kilometre circuit through the streets of Adelaide.

“This is the toughest stage of the race and it’s generally where the GC (general classification) is decided,” Gerrans, who will be aiming for a record fourth Tour Down Under win, said of Saturday’s stage.

“One stage to go and anything can happen but I tell you what, I’d prefer to go into that last stage in front than behind.”

Porte conceded his chances of outsprinting Gerrans were remote at best.

“I couldn’t sprint out of sight on a dark night,” Porte laughed.

“But I’m happy with how it’s gone — I didn’t target this race.

“It’s just nice to get my first win in a BMC jersey.”

Saturday’s race started in the wine growing town of McLaren Vale and took in three circuits of Aldinga Beach before the ascents of Willunga Hill.

But as the first climb up Willunga Hill approached their lead had been whittled down to two-and-a-half minutes and they were finally caught on the approach to the second climb.

With one kilometre to go on the ascent Porte attacked. Henao went with him but with 300 metres remaining Porte kicked again and the Colombian couldn’t respond. – Agence France-Presse