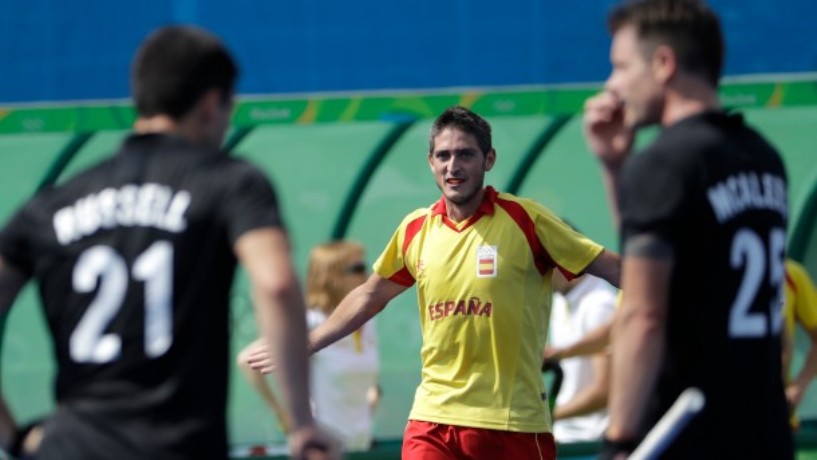 The Deodoro Hockey Centre enjoyed a thrilling day of men’s competition play on day four, with all 12 teams in action as the race for the Quarter-Final places significantly stepped up in pace.
In Pool A, triple Olympic silver medallists Spain (FIH Hero World Ranking: 11) continued their remarkable form in Rio with a dramatic 3-2 victory over New Zealand (WR: 8). A third successive win has put the Red Sticks onto nine points, enough to ensure that they will definitely feature in the Quarter-Final stages of the competition.
Xavi Lleonart scored the winning goal with less than 30 seconds of the match remaining, firing into the roof of the net from close range to give Spain – who defeated top-ranked Australia on Sunday – a stunning double success over the Oceania nations in pool play.
Spain have made a huge impression here in Rio, and will now set their sights on finishing as high as possible in the Pool A standings, knowing that a first place finish would see them taking on the team that finishes fourth in Pool B.
Spain are certain to be joined in the last eight by Belgium (WR: 6), who claimed their third win in three Pool A matches by defeating World champions Australia (WR: 1). Tanguy Cosyns finished off a brilliant team move early in the second quarter to score the only goal of a tense, fiercely contested game, as the Red Lions condemned the top ranked team in world hockey to their second defeat in three matches.
While Belgium sit proudly at the top of Pool A thanks to a superior goal difference over Spain, the Kookaburras now find themselves in unfamiliar territory, currently lying fourth in the standings.
Great Britain (WR: 4) ended the day sitting in third position in Pool A, having claimed their first win of the competition with a goal-difference boosting 9-1 scoreline against host nation Brazil (WR: 30). Incredibly, Brazil struck first in the match when GB goalkeeper George Pinner was beaten by a precise penalty corner drag-flick from Brazil’s Stephane Vehrle-Smith, who plays his club hockey alongside Pinner for English champions Holcombe HC.
Vehrle-Smith’s strike was a moment of history for Brazil, being their first ever goal in Olympic hockey competition. Despite the early set-back, Great Britain were deserving winners with Barry Middleton, Ashley Jackson and Sam Ward all hitting doubles in the triumph.
In Pool B, Germany (WR: 3) claimed a third successive victory to remain top of the standings, edging past courageous Ireland (WR: 12) 3-2 to guarantee their place in the competition Quarter-Finals. Moritz Fürste, a player targeting a third gold medal in Rio after being part of the title-winning Germany squads at Beijing 2008 and London 2012, scored twice in a contest to help Die Honamas overcome a strong challenge from the Green Machine.
Ireland finished the day sitting in fifth position, and will now need to win both of their remaining Pool B matches if they are to have any chance of reaching the Quarter-Finals.
It was another good day for the Netherlands (WR: 2), who thrashed Canada (WR: 15) 7-0 to move second in the standings with seven points and also book their ticket to the Quarter-Finals.  Mink van der Weerden continued his staggering Olympic scoring record by netting for a tenth match in succession, a sequence that started in the Netherlands’ opening match at the London 2012 Olympiad.
Van der Weerden bagged a hat-trick in the contest, with live-wire striker Jeroen Hertzberger also scoring twice as the European champions outclassed the Red Caribous, who sit sixth in Pool B. It was another special day for Netherlands’ youngster Jorrit Croon, who celebrated his 18th birthday in Rio today.
“I didn’t expect a year ago that I would be celebrating my 18th birthday at the Olympics”, said Croon. “The Olympics are something special and to celebrate here with the crowd, they were singing when I entered the pitch, was a great, great feeling.”
Asian champions India (WR: 5) also enjoyed success on day four, taking a big step towards sealing their place in the Quarter-Finals with a 2-1 win against Pan-American Champions Argentina (WR: 7). Goals from Chinglesana Kangujam and Kothajit Khadangbam proved to be decisive for the eight times Olympic gold medallists, who ended the day placed third in the Pool B standings with six points, two points clear of Argentina, who currently occupy that all-important fourth Quarter-Final qualification spot.
Complete information about the hockey competitions at the Rio 2016 Olympic Games can be found on the official website: rio2016.com/en/hockey.
The Olympic hockey events take place from 6-19 August at Rio’s purpose-built Deodoro Olympic Park, and will feature the 12 men’s and 12 women’s international teams that qualified through the Hockey World League and Continental Championships.
Tickets for both events are still available and can be purchased here.

The top four finishers in each pool will qualify for the Quarter-Finals.