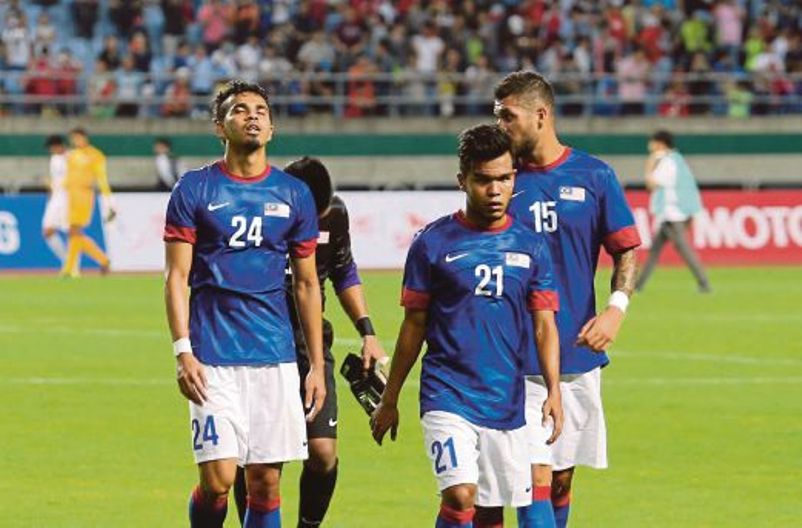 * First to arrive and first to leave Incheon

MALAYSIA’S hopes of reaching the football quarter-finals went up in smoke from the time Faiz Nazmi Mansor fumbled a first minute opportunity to score and when Terengganu defender Zubir Azmi was given the sack for a second yellow card in the 33rd minute it was all over as Saudi Arabia rode on numerical advantage for a 3-0 win at the Goyang Stadium on Sunday toadvance.to the next round.

And when first choice goalkeeper Izham Tarmizi Roslan was carried out with a left ankle injury after 60 minutes the writing was on the wall – that only a miracle could save the Malaysians who were fell behind after 56 minutes when Fareed Al-Hafith headed home from some sloppy defending by the Malaysians.

Substitute custodian Farhan Abu Bakar who gave a good account of himself in the 4-0 win over Laos, was beaten twice partly due to Malaysia’s poor defending.

The Malaysians matched Saudi Arabia until Thai referee Sivakorn Pu Udom flashed the red on Zubir for a body check on Abdul Azizi Ali Al Bishi on 33 minutes – just three minutes after booking him for a tackle.

The sacking was the turning point for the Malaysians who had an equal share of the ball throughout the match despite a player short. The Malaysians fought tooth and nail against the more skilful Saudis but the numerical disadvantage .was taking its toll on coach Datuk Ong Kim Swee and his players.

The Saudis needed only a draw to advance while Malaysia needed an outright win to dislodge Saudi Arabia.

“It would have been a different story if the match was 11 versus 11. When you are a man short you are at a disadvantage…but here we fought our hearts out. The players fought the odds and the red card played a part in handing Saudi the win,” said a disappointed Kim Swee.

Gary Steven Robbat, Nor Farhan Muhammad and Ashri Chuchu had their chances but Malaysia’s perennial woes – poor finishing – once again stood out like a sore thumb.

The Middle East powerhouse joined South Korea in the next round after the hosts defeated Laos 2-0 at the Hwaseong Stadium to finish on top of Group A with nine points while the Saudis finished second with six points. Malaysia finished third with three points while Laos finished without a point and without a goal to show.