Home 2021 Therabody – The key to recovery 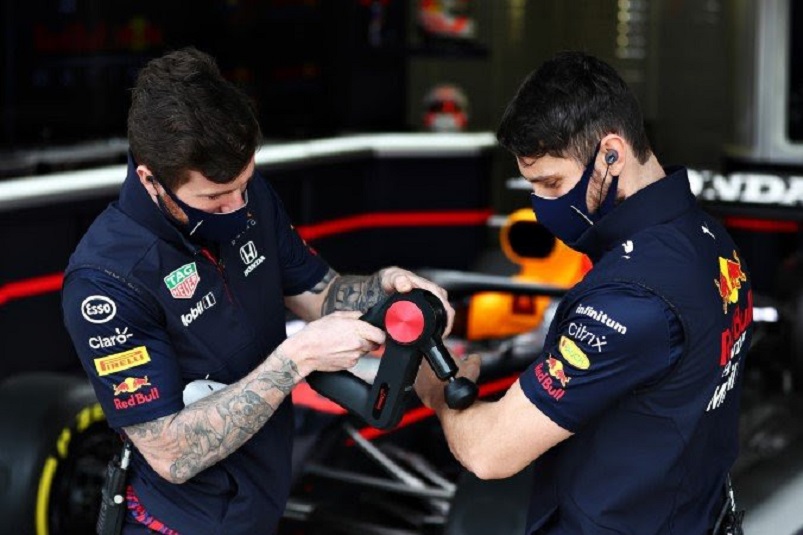 In Formula One, speed is everything and that extends from the raw performance of the cars all the way to how quickly the Team’s world record-breaking pit crew can recover from intense track sessions and a demanding 23 race calendar.

At the 2019 Brazilian Grand Prix, Red Bull Racing’s pit crew set an incredible new standard in getting all four wheels of Max Verstappen’s car changed in just 1.82 seconds. But the Team’s world-beating efforts, which include nine of the ten fastest pit stops last season, come at a price with countless hours of intense training taking their toll in the run-up to those crucial milliseconds.

Therabody is the creator of the first-ever hand-held percussive therapy device, Theragun, which is used to accelerate recovery and support overall athletic performance. Since its official launch in 2016, the company evolved from Theragun to Therabody, an entire ecosystem of wellness products, content, and services rooted in science and research.

Therabody’s unique and industry-leading devices and solutions are relied on by more than 250 professional sports teams and athletes around the world, and through its partnership with Red Bull Racing Honda, the company will power the world’s fastest sport.

At each race of the 2021 season, Max, Sergio and the fastest pit crew in the sport will have access to – and benefit from – a range of Therabody’s Bluetooth-enabled, percussive therapy devices that will be used to help optimize warm-up and recovery to ensure that they are in the best possible condition ahead of each session.

Red Bull Racing Honda Team Principal, Christian Horner, said: “From the outside, Formula One might not seem like an intensely physical sport, especially for the mechanics in the garage. But these guys work incredibly hard to be in the best condition possible and if they weren’t, 1.82-second pit stops wouldn’t be possible. The downside is that the intense preparation and repetition can lead to muscle soreness so teaming up with Therabody will help mitigate that and will help the Team recover faster so that they can perform at their best.”

Therabody Founder and Chief Wellness Officer, Dr. Jason Wersland, said: “The Red Bull Racing Team is globally renowned for its speed. From the drivers to the pit crew, each member works incredibly hard physically and mentally, and effective recovery is critical to the team’s success. Therabody is honored to be supporting the Red Bull Racing Team and developing protocols that will help improve their recovery and maximize their performance.”