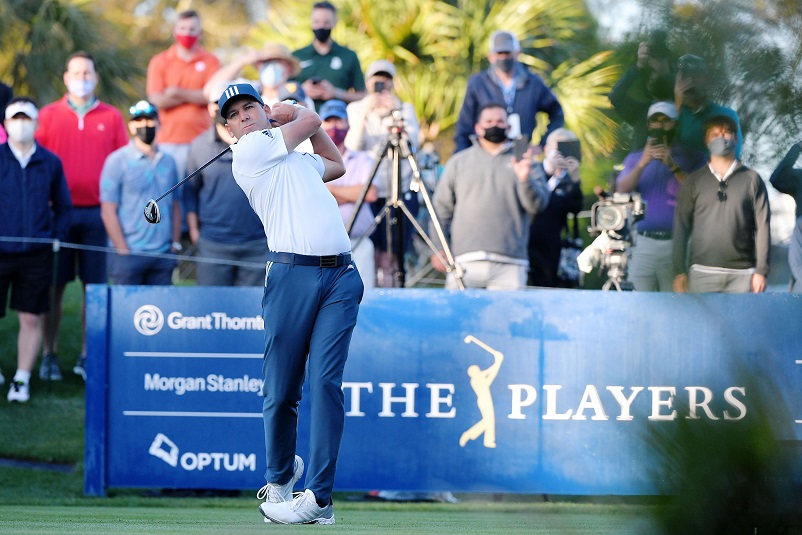 Sergio Garcia can’t explain it. But not that he has to.

The Spaniard is comfortable here at The Stadium Course at TPC Sawgrass, where he hasn’t missed a cut in nearly 20 years competing. He won it all in 2008, of course, but also finished solo second and T2 on Pete Dye’s masterpiece in 2007 and 2015, respectively. And this time around, he entered with 24 career rounds in the 60s on the Stadium Course, most all time.

Garcia capped a stirring 7-under 65 with an 18-foot eagle at the last to give him a two-shot lead over Brian Harman Thursday at THE PLAYERS Championship. The 2008 champion, who started on the back nine, went birdie-birdie-eagle over his final three holes for a closing 32.

“I don’t know, I just love it,” Garcia said. “I’ve always said it, Valderrama and this course are some of my top favourite ones and for some reason it just kind of fits my eye. I see what I want to do pretty much every hole and then it’s a matter of doing it. But it definitely I feel more comfortable, and I’ve done well. So all those things help.”

It was a fitting end to a masterful day on the par-5s, as the Spaniard played the four holes in 5-under with a pair of eagles and a birdie. It was the first time in 77 career rounds at TPC Sawgrass that Garcia posted multiple eagles, and his first round of 65 or better since the final round in 2013.

On the eagle at the ninth hole, his last of the day, Garcia said: “I was able to hit a beautiful hold up 5-wood just right of the hole, landed in a perfect spot to be able to hold the green, which is never easy there, and left myself an, actually a really nice uphill putt, pretty much straight, maybe left edge. And I was fortunate enough to roll it in.”

Three Koreans opened at even-par, headlined by 2017 PLAYERS champion Si Woo Kim. The recent winner of The American Express raced out to a 2-under start with an eagle at the par-5 16th, but quickly lost the momentum when his tee shot at the island green found the water, leading to a double bogey. A bogey at the first dropped him to 1-over before he pulled even for the day with a 9-foot birdie at the last.

Fellow countryman Sungjae Im also was even-par Thursday, as the world’s 17th-ranked player bogeyed the first before getting it back with a 12-foot birdie at the ninth. It was a similar story on the back nine, as he bogeyed the par-3 13th before pulling even with a birdie at the island green when he stuck his tee shot inside 5 feet.

K.H. Lee posted an even-par round of his own in the afternoon, though he opened with two quick birdies at the 10th and 14th holes. But he carded bogeys on two of his next three holes before finishing out even for the day.

Reigning champion Rory McIlroy, who won the last rendition of this event in 2019, struggled mightily en route to a first-round 79. A double bogey at the first gave way to an overall sluggish start, as the World No. 11 and 2019 FedExCup champion followed with bogey at the 13th before things unraveled with a quadruple bogey at the par-4 18th, where McIlroy twice found the water to the left.

“I mean obviously the big number on 18 didn’t help, and then doubling the 1st wasn’t helpful either,” McIlroy said. “It’s just hard to recover when you haven’t played good. I mean regardless if you take that 18th hole out, it still wasn’t a very good day.”

But McIlroy was not alone. Fellow past champion Henrik Stenson posted a 13-over 85, while Tony Finau—ranked No. 7 in the FedExCup standings—opened with a 6-over 78. That matched India’s Anirban Lahiri, as well as Chinese Taipei’s C.T. Pan, who was 5-over on the the back nine at TPC Sawgrass, including a double at the par-3 island green after his tee shot found the water.

China’s Xinjun Zhang fared only moderately better, opening with a 4-over 76 in his PLAYERS debut. The 33-year-old sunk a 17-foot birdie putt at the par-5 second before encountering trouble during the middle of his round, carding five bogeys over a seven-hole stretch starting at the No 6.

Sung Kang of Korea also shot a Thursday 76, as did Hideki Matsuyama. It was a far different story from one year ago, where the Japanese star opened with a 63 before the COVID-19 pandemic wiped out the remainder of the tournament. This time Matsuyama —who started on the back—made the turn at 1-under after a 14-foot birdie at No. 17, but struggled on the front with three bogeys, as well as a double bogey at the par-3 third.

Fellow Korean Byeong Hun An was just 1-over entering his final two holes before coming undone at the island green, where he hit four balls into the water en route to an 11. It matched the second-highest score on the 17th hole since 1983. Robert Gamez also posted an 11 at the 1990 PLAYERS, while Bob Tway still holds the record for his third-round 12 in 2005.