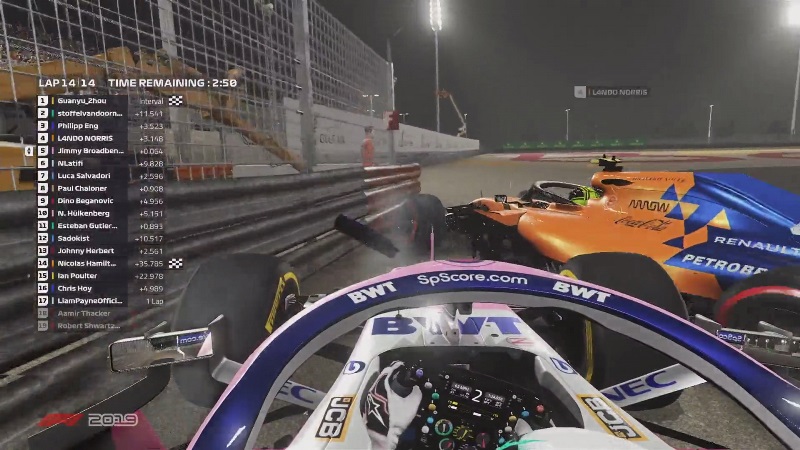 At the world’s first F1 Esports Virtual GP, which took place on the Bahrain Circuit, the Team came away with pole position and a third place trophy thanks to the driving prowess of Red Bull athlete and Weathertech SportsCar driver Philipp Eng.
From the first lap of Qualifying Philipp topped the timesheet setting the early pace with a 1:28.638. None of the other racers could get close to the Austrian and with under two minutes remaining of the session he took another 0.371s off his best time ensuring pole position. Teammate Sir Chris Hoy, who first played the game last night, qualified 17th and was promoted to 16th due to another driver not being able to race.
Philipp got away quickly but lost his lead to Jonny Herbert’s Alfa Romeo, almost instantly. Guanyu Zhou’s Renault was also in the hunt and the three got around turn one without issue.
Philipp and Zhou were able to get past Herbert, generating a back and forth battle for several laps with both drivers taking their turn to lead. On lap six, Zhou pitted and Philipp was able to gain an 11 second lead over his rival.
Philipp chose to pit after lap eight, and when he was back on track found himself down in fourth, behind Zhou, Norris and Vandoorne. Both Norris and Vandoorne then pitted and Philipp returned to second, where he stayed until the penultimate lap.
On the final lap Philipp was being caught by Vandoorne before the two collided, nudging Philipp off the track and into third. He was lucky to avoid the wall, but was unable to re-claim second place. The Austrian crossed the line in third, with Zhou taking the win and Vandoorne in second place.
Sir Chris’s race was based in the midfield after he was fortunate to avoid the first lap carnage. This was enough to see him rise to 12th, but he was unable to capitalise on his position and as the other drivers regained composure, he found himself slipping down the order to finish 16th.
Following his podium finish Philipp commented “It was good fun tonight and I really enjoyed representing Aston Martin Red Bull Racing in the virtual world. Pole was a great achievement, as I don’t really play this game very often, but I was struggling a bit to make the strategy work in the race. Somehow my pit stop took a little too long and I think I didn’t de-select to repair the damage. A podium finish was a good start though and now I have a good base, so I’m happy to be back driving for the Team anytime.”
Following his first Esports experience Chris commented “Brilliant fun, and quite surreal to be racing in a global, live sporting event from my garage! I had a blast and managed to get round just about in one piece despite only playing the game for first time yesterday! Great to say that I’ve now represented Aston Martin Red Bull Racing at a Grand Prix!”
F1 ESPORTS BAHRAIN VIRTUAL GP RACE RESULTS
The next F1 Esports Virtual GP will take place on the Albert Park Circuit on 3–5 April.