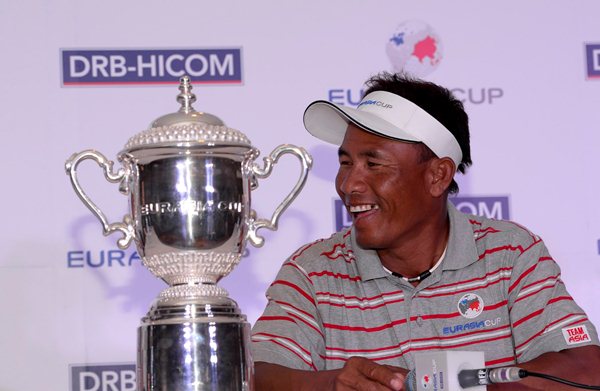 The decorated Thai ace, who holds an unprecedented three Asian Tour Order of Merit titles, will spearhead the continent’s charge at the three-day event which has been billed as an intercontinental clash.

With his illustrious track record that also includes 13 Asian Tour titles, Thongchai has issued a battle cry for his team to show their mettle and win lift the EurAsia Cup.

“We have a very complete team and I believe we stand a good chance of winning the trophy. It’s all about team work and there is a rich mix of youth and experience that will guide the team to victory,” said Thongchai.

The EurAsia Cup is based on a format similar to the Ryder Cup where the teams will go head-to-head in the fourball format on day one, foursomes on day two before culminating with the singles on the final day.

Thongchai acknowledged that Team Europe, led by Miguel Angel Jimenez and includes Ryder Cup stars in Graeme McDowell and Thomas Bjorn, will be a formidable side but is quietly confident his team will prevail on Saturday. The winning team must garner 10.5 points to win the first EurAsia Cup trophy.

“Europe has a very strong team. Graeme McDowell has a good track record in Match Play and Miguel, with his vast experience, is a good captain. But I know our team has what it takes to win this tournament and I’m confident,” said Thongchai.

The veteran Spaniard got one-up on Thongchai by winning an F1 simulator race at Glenmarie today but the Team Asia captain responded aptly: “Miguel got me by a few seconds on the F1 simulator. I’ll get him by a few points in the Eurasia Cup.”