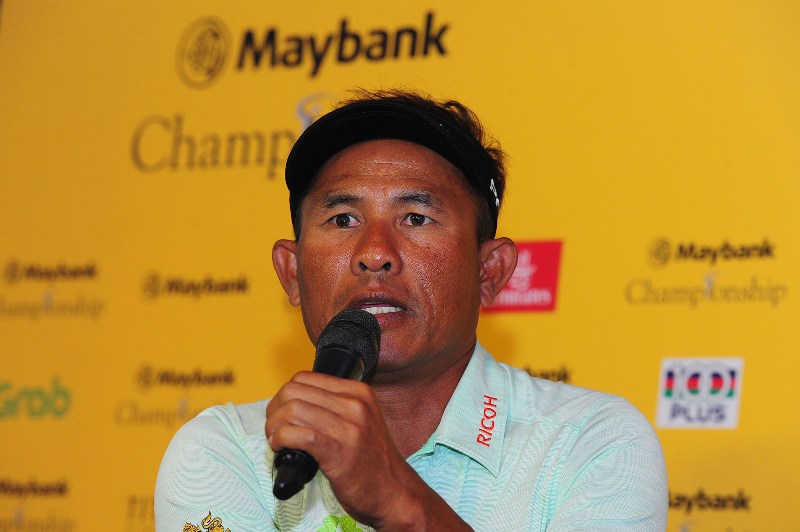 Thai veteran star Thongchai Jaidee is confident he can contend at the US$3 million Maybank Championship which starts on Thursday on one of his happy hunting grounds.

The 47-year-old Thongchai, the only man to win three Asian Tour Order of Merit titles, earned his first co-sanctioned Asian Tour and European Tour victory at the Saujana Golf and Country Club back in 2004 and successfully defended his title in the following year.

Those victories propelled the former paratrooper into stardom where he has since accumulated 13 Asian Tour victories, of which four are co-sanctioned titles. Thongchai has also won four European Tour tournaments on European soil.

Ranked 60th in the world, the Thai strongman is keen to make a quick return into the world’s top-50 with a win this week to gain exemptions into next month’s WGC-Mexico Championship and the year’s first Major at the Masters Tournament in April.

A refreshed Marcus Fraser of Australia will be looking to successfully defend his crown at the Maybank Championship at Saujana, which he has also tasted success at previously when he won the individual category at the Eisenhower Trophy during his amateur days. Fraser, who finished second on the Asian Tour Order of Merit last season, is making his first appearance of 2017 on the Asian Tour and European Tour.

England’s Lee Westwood, a former world number one and an Asian specialist with eight Asian Tour victories, is also tipped to be amongst the frontrunners at the Maybank Championship, which is celebrating its second edition. He won at Saujana back in 1997 and was runner-up in the following year.

All eyes will also be on talented Malaysian prospect Gavin Green, who is a Maybank-sponsored golfer, and Korea’s Jeunghun Wang who is ranked 39th in the world. After earning his Asian Tour card by finishing second on the Asian Development Tour Order of Merit last season, the 23-year-old Green will be eager to stamp his mark against the top stars from Asia and Europe while Wang, 21, is in confident mood after winning in Qatar two weeks ago.

I’ve won twice at Saujana in 2004 and 2005 which was very important for my career. That’s why I love this golf course. A two-time winner. My life changed from here. On the last day in 2004, I made a hole in one on the 16th hole during the final round and I won by two shots. One shot changed my life. It made me who I am today. That’s why I love coming back to Malaysia. It’s like my second home. I have a lot of friends and fans’ support here.

A win this week will be nice as it can take me back into the top-50. That’s why I would like to win this week. I will also get into the Masters. I think I have a good chance. I know the course well. I’ve won two times here. I’ll be trying.

Honestly I don’t remember a lot about the win here 20 years ago. I just remember winning and being associated with Saujana for two or three great years in the middle of the 1990s. I actually lost here in a play-off in 1998 after the win in 1997 so I almost won back to back.

Obviously then I won here in Malaysia three years ago so I love the place, and it’s nice to be back. The course here has improved all the time and the condition is fantastic here this week. The Tour have done a great job setting it up, the greens are in very good condition, you don’t often see greens out here this true. These are some of the truest greens I’ve played on in Asia, rolling really well and if you hit a good putt it will go in. It’s looking good.

It’s always nice to come back as defending champion which I’ve not experienced too much throughout my career but it’s nice when it does happen. It’s quite a familiar golf course for me at Saujana. It’s nice not only to be back in Malaysia but also at Saujana. I’m quite familiar with the golf course, we’ve played a lot of tournaments here in the past. I always love coming to Malaysia. When you like a place, it rubs off on the golf course and that was what happened last year when I won here.

There’s always a little bit of added pressure. A different course, a different field this year, so it’ll be competitive out there. I was fortunate to cross over the line last year and you’ll never know what will happen this year. You’ve got to do everything right to have a chance. It’s pretty out there but I’m looking forward to the challenge.

I’m going to go out and play my game. It is important for me to do what I have to do. I know what to expect from this golf course. I have a high target but I need to focus on my game. If I can do that, the results will come.

I feel good even though it is my first time here. The fairways are soft and it is easy to put the ball close to the hole. My game feels the same. Honestly, I just want to make cut this week. I think about winning every time but I want to focus on my game first and not the win.

I feel like I’m coming back to my home town, home course and home Tour. I feel happy because everyone is very friendly here and this is great for me. Most of the friends I meet on the Asian Tour only ask me to buy them dinner (laughs).  I’ve won early in the season but I want to win more. I’m happy with my results but I want to keep focus on my game.