Italian Paolo Tiralongo won the ninth stage of the Giro d’Italia on Sunday as his Astana team leader Fabio Aru snatched back one second on race leader Alberto Contador.

Veteran Tiralongo, 37, counter-attacked out of a breakaway group of 10 riders 14km from the end to catch long time lone leader Tom Jelte Slagter, who had escaped with 70km still to ride.

By that point the Cannondale-Garmin rider was spent and Sicilian Tiralongo left him in his wake to claim the victory at the end of 224km from Benevento to San Giorgio del Sannio.

Dutchman Steven Kruisjwijk, who had come so close to a solo victory on Saturday, took second at 21sec with Simon Geschke of Germany heading the breakaway sprint finish a further two seconds back as Slagter faded to seventh.

But behind the breakaway riders, Aru had attacked out of the main peloton and while Contador and Richie Porte matched his kick, Colombian Rigoberto Uran could not, and lost around 45sec.

Sardinian Aru, 24, had attacked the main group with 15km left on the final climb but while Uran, second in the Giro the last two years, failed to respond, both Contador and Porte were able to glide into the Astana leader’s slipstream.

Aided by Aru’s teammate Mikel Landa, who is fifth overall at 46sec, the four-man group put time into Uran as they came in just under a minute behind the winner.

Ahead of Monday’s first rest day, Aru took 10th on the stage and cut his deficit to Contador and the pink jersey from 4sec to 3sec, while Tasmanian Porte remains third at 22sec.

But it was a successful day for the top three as Uran, who is the best timetriallist of the overall contenders, is now eighth at 2min 10sec off Contador. 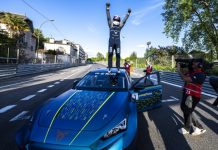