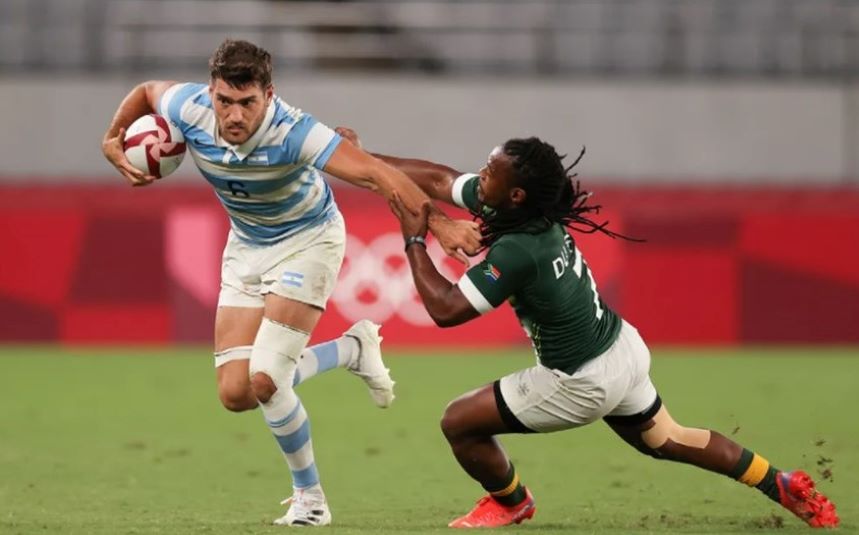 Great Britain, New Zealand, Argentina and Fiji remain in with a chance of Olympic glory on finals day on Wednesday as rugby sevens lived up to its high octane reputation during four action packed quarter-finals on day two at Tokyo Stadium today.

New Zealand booked their place in the last four with a comfortable 21-10 win over Canada, while their opponents Great Britain showed incredible self-belief to come back from 21-0 down to beat the USA 26-21 in Tuesday’s quarter-finals.

Argentina earned their place in the last four with a remarkable 19-14 win over Rio 2016 bronze medallists South Africa, despite being down to six men for more than 11 minutes of an intense and hard-fought match.

The South Americans will play Fiji — who won gold five years ago on rugby sevens’ Olympic debut in Rio — in the semi-finals after beating Australia 19-0 in impressive fashion.

The four semi-finallists will start day three of the men’s Olympic sevens tournament at Tokyo Stadium with their sights set firmly on the gold medal.

New Zealand, Great Britain, Argentina and Fiji are guaranteed to be involved in a medal match on Wednesday, but all will be targeting a place on the top step of the podium.

The first medal semi-final will get under way at 11:00 local time (GMT+9) when the All Blacks Sevens take on reigning Olympic silver medallists Great Britain.

The semi-final will be the first time that New Zealand have played Great Britain at this level.

The winner of the first semi-final will take on either Fiji or Argentina, who meet at 11:30 local time on Wednesday, in the gold medal match.

Argentina narrowly lost to Great Britain at the quarter-final stage in Rio five years ago and will be determined to continue their run in Japan into the gold medal match.

To do so, they will have to summon another huge effort in Wednesday’s semi-final. Argentina have won only two of their last 10 meetings with Fiji on the World Series, although those victories both came in the 2020 season.

Day three will get under way at 09:00 local time (GMT+9) as hosts Japan and the Republic of Korea go in search of their first win of Tokyo 2020 in the 11th-place play-off.

Following that match, Kenya whose late consolation try against Ireland cost their opponents a place in the medal quarter-finals, will attempt to gain revenge for that Pool C defeat in the ninth-place play-off.

The first of the fifth-place semi-finals, which sees Canada face neighbours USA, will kick-off at 10:00 local time, with South Africa and Australia taking centre stage after that.

Wednesday’s afternoon session will start at 16:30 local time and will include the seventh and fifth place play-off before the bronze medal match begins at 17:30 local time.

The gold medal match, which will feature either New Zealand or Great Britain against the winner of the semi-final between Argentina and Fiji, will kick-off at 18:00 local time (GMT+9).