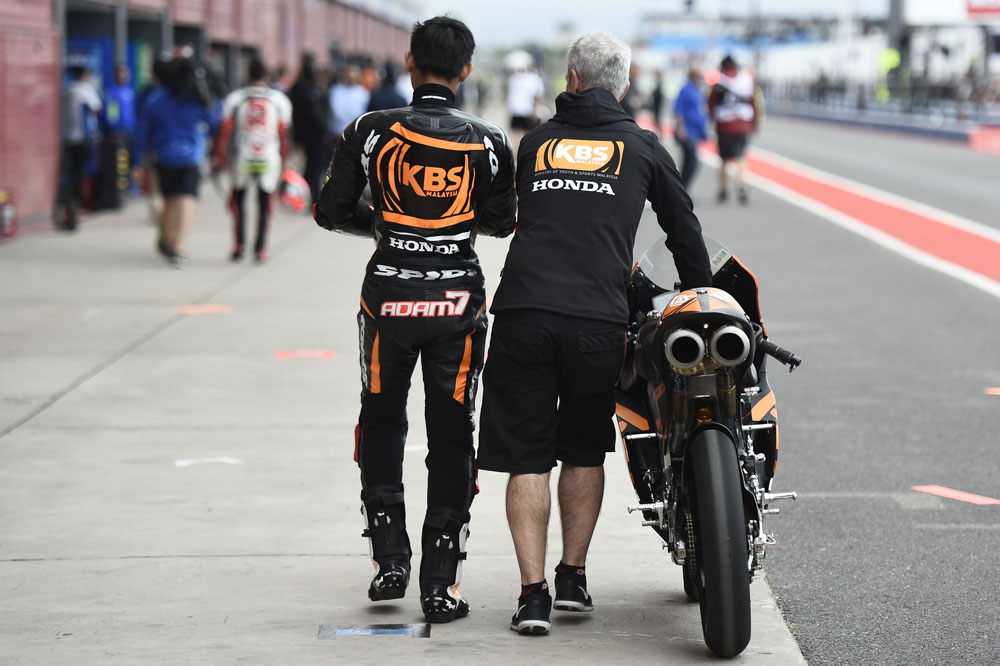 Starting from 21st position on the grid, Adam Norrodin made an immediate attack, gaining five places by the end of lap two. Determined to fight in the leading group, the Malaysian rider worked hard to hold onto the pack ahead but with tyre choice coming into play midway through the race, was unable to maintain his initial pace. Norrodin relentlessly pushed to regain positions, but with limited grip in the rear, the 18-year-old struggled to gain any further positions, concluding today’s Grand Prix just outside the points.

Unable to make the start he had hoped for, Ayumu Sasaki faced a difficult task at hand to work his way up from 25th position. Pushing to fight his way through the field, the 16-year-old rookie found himself caught in a five rider battle for 20th place. Dicing throughout, Sasaki fought hard to hold onto the top spot in his group, battling to the line and finishing his first ever race at the South American circuit.

Johan Stigefelt – Team Manager
“It’s been a tough weekend from the beginning, so we’ve been playing catch up from the start. Unfortunately this reflected in the race today.
Adam made a good start and was not far off from the front group but unfortunately after that he struggled with grip and couldn’t hold onto the riders in front. We can see clearly that he had a problem, so it’s a real shame for him because we know he had the pace.
For Ayumu it was hard for him because we’ve been struggling with his set-up all weekend and then qualifying so far back made it very difficult. He didn’t make a very good start and ended up fighting with the slower riders. If he had qualified better for sure he could have made it into the top ten as he said his bike set-up felt very good in the race.
We have to learn from this race and do more of what we did in Qatar.”

#7 ADAM NORRODIN – P17
“We had a chance to get more points again today, so I’m disappointed with my result. The race started well and we immediately gained some positions; the bike felt good and I was able to catch the back of the leading group. For the first seven or eight laps I had the pace to stay with them but then after that my tyre rapidly dropped and I started to go back. I really tried to keep with the group but it was really difficult and I kept losing the rear; then I lost the tow completely. We will get points again in America.”
#71 AYUMU SASAKI – P20
“We’ve struggled all weekend here and starting from the back of the grid was always going to be hard. Unfortunately I didn’t make the best start and so within the first three laps I lost the front group. I’m disappointed because the bike set-up felt really good in the race and I had good pace, so it’s a shame I was only fighting at the back. I hope to improve a lot in Texas.”