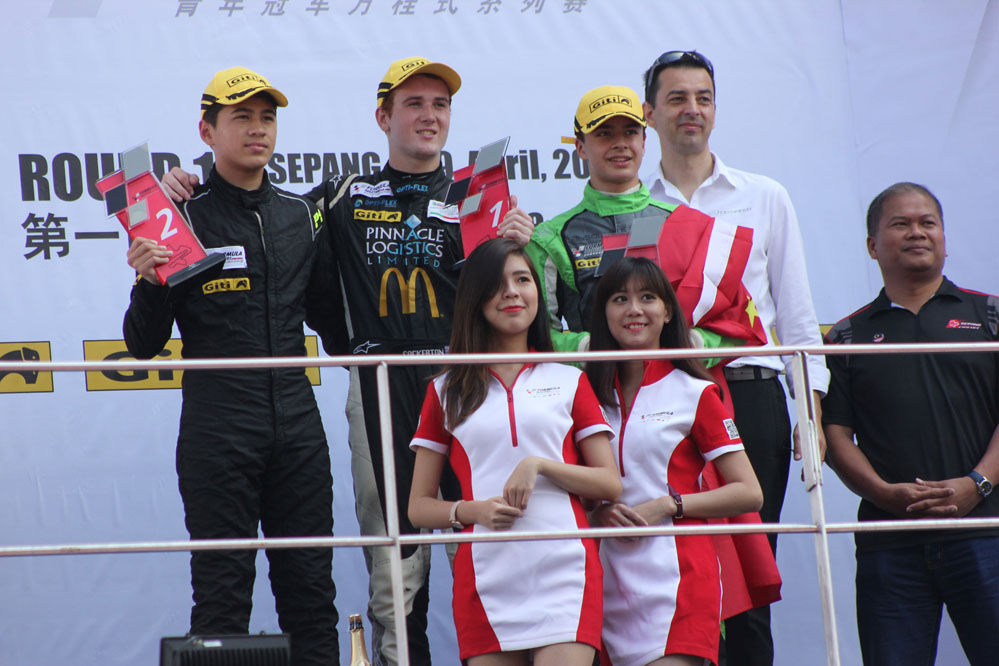 With two more races scheduled on the final day of Round 1 of the Formula Masters China Series (FMCS) at the Sepang International Circuit, Singaporean ace Danial Nielsen-Frost wrapped up his debut weekend with two more second-place finishes on Sunday.

Starting from the front row of the grid in P2, the youngster got off to a good start and managed to maintain his track position throughout the 6-lap sprint race. After a brief safety car period, Frost did find himself in a position to challenge for the lead of the race, one he attempted and succeeded on the final corner just before the start of the final lap of the race. Though Frost’s lead of the race was brief, he eventually settled for second position and his second consecutive podium finish of the weekend following his podium finish on Saturday’s Race 1.

Starting P2 for the final race of the weekend, Frost had a better run off the start to keep his position on track through most of the shortened 10-lap race. Towards the latter stages of the race, the youngster did come under pressure from Taylor, as the Singaporean worked hard to defend his position all the way through to the chequered flag finishing in second place.

With three second-places and a fourth-position finish from the four races contested, Frost was able to open his FMCS account with a total points haul of 51 points*.

Danial Nielsen-Frost (Car #66, Eurasia Motorsports) – P2 Race 3; P2 Race 4: “I started Race 3 from P2 and had an OK start, but Taylor had a better getaway from the lights. The strategy was to stay as close to him and concentrate on my pace and the road ahead and make sure that I kept the gap as small as possible. After the safety car period at the mid-way point, at the restart I managed to close in on Taylor (Cockerton) and did manage to overtake him on Turn 15 on lap 5, but he retook the position in between Turns 1 and 2 on the final lap. Nevertheless, I am really happy with my pace and with the result!

“I had a much better start in Race 4 and was able to stay in touch with the leader, Daniel (Lu). I kept my pace consistent and was happy with the pace. However, I did begin to struggle with my pace towards the end and that allowed Taylor to catch me. As a result, I found myself having to defend the position all the way to the flag. Overall though, I am really happy with the results this weekend especially considering the points I was able to collect. A big ‘thank you’ to the team engineers and mechanics for all the hard work! My focus is now on the next round, next month in May.”

With the conclusion of the curtain-raiser round of the series, Round 2 will see the FMCS grid return to the Sepang International Circuit in a month’s time for the second round from 5 to 7 May 2017.