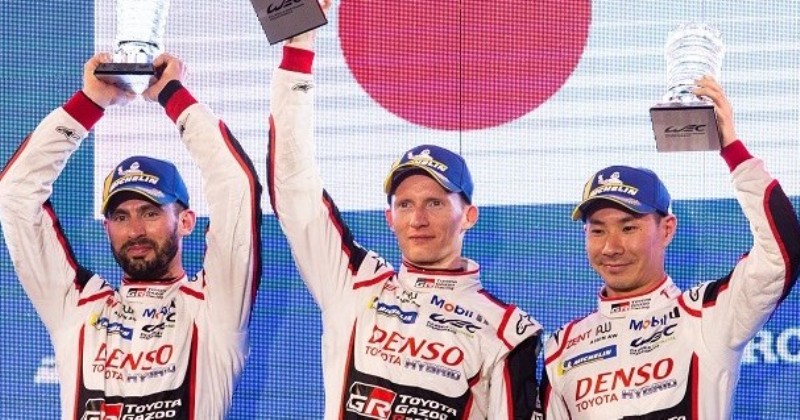 A crowd of 38,000 people were present at Bahrain International Circuit over the weekend as the country celebrated its Bahrain National Day festivities with a variety of entertainment including popular music artists in the WEC Fan Zone.

Th No.7 trio of Mike Conway, José María López and Kamui Kobayashi took their second win of the season and Toyota’s fourth success in Bahrain since 2013.

For Conway it marked his 10th WEC victory in what was also Toyota’s 60th WEC event.

Afterwards, the No.7 Toyota TS050 HYBRID never looked back as its trio of drivers produced flawless stints to take a conclusive victory which promoted them to the top of the points standings.

Sébastien Buemi, Brendon Hartley and Kazuki Nakajima took the runners-up position as the trio fought back from a delay on the opening tour avoiding the incident between Senna and Robertson.

Rebellion Racing also came through to take a podium position as Senna, Gustavo Menezes and Norman Nato overhauled the Team LNT Ginettas to stay in relative touch with the Toyotas in the points table.

Team LNT suffered a double retirement after mechanical issues intervened in their race but the British manufacturer took some consolation as Jordan King set the fastest lap of the race.

Converting their first pole position, earned by Di Resta and Hanson on Friday, the British-entered team were barely challenged as they took a maximum points score from the weekend.

The victory came after the team had shown skill and speed at the three previous rounds at Silverstone, Fuji and Shanghai but had suffered misfortune which compromised chances of a class victory.

The trio were just unable to mount a bid for victory in the last hour in their Goodyear-shod ORECA-Gibson, despite getting to within 15 seconds of the United Autosports car before the final pit stop.

Completing the podium was the Jackie Chan DC Racing-entered car of Will Stevens, Gabriel Aubry and Ho-Pin Tung. The crew fought back from a difficult opening lap when Tung dropped to the rear of the field.