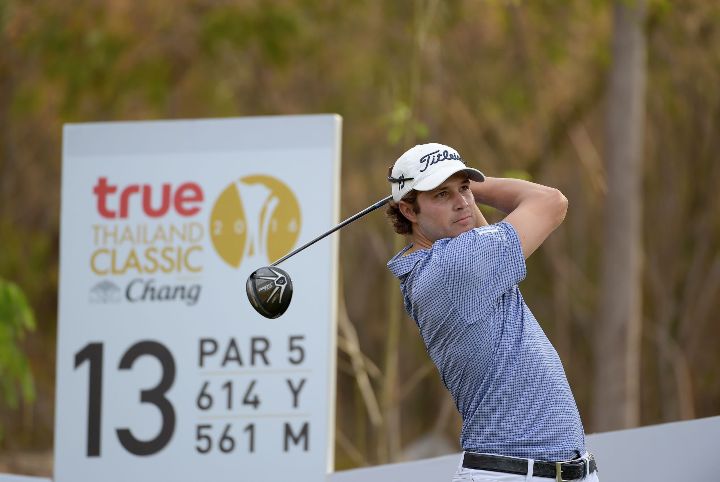 Peter Uihlein produced a scintillating eight-under-par 64 to take a one-shot first round lead at the True Thailand Classic presented by Chang on Thursday.

The 26-year-old American, fresh from a tied eighth and equal fourth finish in his last two starts, raced into the lead at Black Mountain Golf Club following nine birdies on the card.

Sweden’s Pelle Edberg dropped two bogeys over his closing three holes to settle for a 65 while Scotsman Scott Jamieson and Spaniard Javier Colomo carded 66s in the US$1.75 million event co-sanctioned by the Asian Tour and European Tour.

Asia’s leading performers were upcoming Hsieh Chi-hsien of Chinese Taipei and Thailand’s Pariya Junhasavasdikul, who returned 67s while hometown hero Prom Meesawat and Filipino Angelo Que were amongst those bunched on 68s.

Long-hitting Uihlein, a former world amateur number one, was delighted to find himself atop the leaderboard at the True Thailand Classic, the richest golf event in the Kingdom. “I’m pleased, I putted well and the putter is still hot which is nice. Hit some good wedges and some good iron shots. It was good,” said the American, who is chasing a second European Tour victory.

After opening with two birdies from the 10th tee, Uihlein dropped his lone bogey on 12, which subsequently sparked his birdie run. “That’s funny. I birdied the first two holes and then duck-hooked into the water. Sam, my caddie said “man, you look so depressed.” I guess with the way I’ve been hitting it, I was just annoyed and frustrated. After that, I just kind of free-wheeled it.

“This is more my kind of course. This one sets up for longer hitters which is more my style as opposed to what I’ve heard about next week (Delhi Golf Club). It’s always nice to get off to a good start,” said Uihlein.

Edberg, 36, was out in the lead on his own at nine under through 15 holes before enduring some late blemishes. The Black Mountain-sponsored Swede said: “I played really well. Hit some great tee shots, long and straight and it gave me a few birdie chances. I know the course better than my home course in Sweden which says a lot. I know my way around here.”

After graduating from the Asian Development Tour (ADT) where he finished second on the Order of Merit last season, Hsieh, 25, is enjoying rubbing shoulders with the stars of the game. He reeled in seven birdies to stay on Uihlein’s coattail.

“It was pretty nice and I was feeling good. I putted really well and every shot was on the fairway. Today was really perfect. I focussed on every shot, I was calm,” said Hsieh, who only missed two fairways.

“I think the ADT is very important as I couldn’t play on the main Tour. It gave me the chance to play in many tournaments and I tried to learn and be comfortable in tournament play. It is a good place to be.”

The local charge was carried by two-time Asian Tour winner Pariya, who was bogey-free with five birdies. With three missed cuts in his last four starts, his presence on the leaderboard was a welcome change in fortune.

“I’ve not had the number in a while. I always have a good feeling about this golf course and when we play here, I always play well. I came into the tournament with that mentality,” said the 31-year-old.

“Somehow, this course suits my eye. I guess I see a lot of room out there instead of the hazards. I know where to place the ball and where to put it and give myself enough opportunities. I didn’t take the opportunities on the par fives, only converted one and didn’t convert on the short 17. But give and take, I made some on the difficult holes as well.”

Australian Jason Scrivener recorded the week’s first hole in one when an eight iron tee shot on the newly designed par three 11th hole found the bottom of the cup. “It was just a perfect number, 154 meters, and I hit a nice eight iron in there which was probably the first good shot of the day so for it to go in was nice,” said the Aussie, who received a bottle of bubbly from Black Mountain Managing Director Harald Elisson.

“We can all hit great shots to a foot or a few inches but you need the little bit of extra luck for the ball to actually go in the hole. The champagne will go down very nicely.”

Scores after round 1 of the True Thailand Classic presented by Chang 2016 being played at the par 72, 7,492 Yards Black Mountain course (am – denotes amateur):