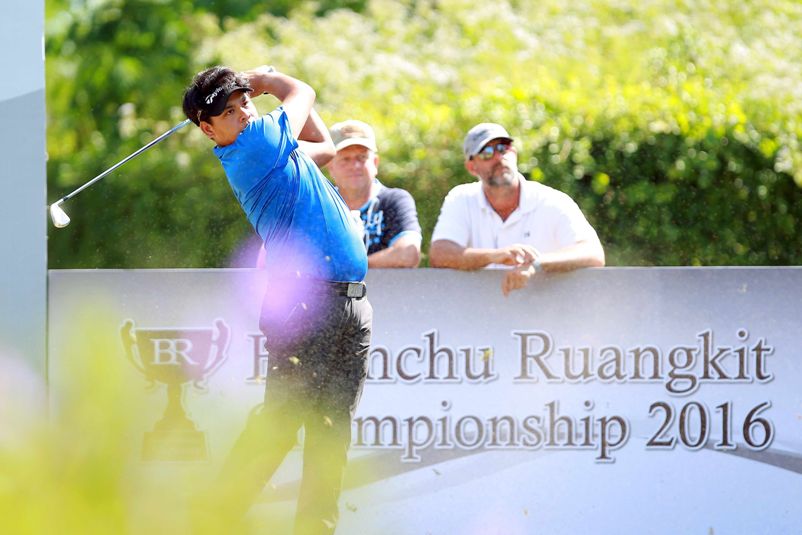 Young Thai Chanachok Dejpiratanamongkol charged home with four birdies in closing five holes to sign for a solid seven-under-par 64 and lead by three shots at the Boonchu Ruangkit Championship on Saturday.

Thai star Thongchai Jaidee, who needs a win to break into world’s top-50 and qualify for the 2017 Masters Tournament, battled to a 70 to share second place with countryman Rattanon Wannasrichan, who returned with a second straight 67, at the Rancho Charnvee Resorts and Country Club.

Another home favourite Kiradech Aphibarnrat (69) moved into fourth place with compatriot Tirawat Kaewsiribandit (66) on matching 203s at the Boonchu Ruangkit Championship, which is the final event on the ADT schedule this season.

Defending champion Phachara Khongwatmai of Thailand and Malaysia’s Gavin Green, placed second on the ADT Order of Merit slipped down the leaderboard following rounds of 73 and 74 respectively.

Chanachok, who joined the play-for-pay ranks last January, took advantage of his hot putter to charge into the lead for the first time as a professional golfer.

“I putted really well and I drove the ball well. I made a 20-footer to save par on eight and on the ninth, I sank a 12-footer for par too. I chipped in for eagle on fifth from about 10 yards. That got my round going. I played solid.

“I told my caddy that we will just try and have fun. I didn’t think much. I just focused on my game out there. The pins were hard. I guess that’s why we don’t see many people shooting low scores today,” said Chanachok.

Baby-faced Rattanon, who marked his card with three bogeys and seven birdies, including four straight ones from fifth, plans to stay grounded in his search for a second ADT win at the Boonchu Ruangkit Championship.

“The four birdies in-a-row was definitely the highlight for me today. I hit the green in two shots on par-five fifth and had two putts for birdie. That got my momentum going heading into the next few holes. I sank a 10-footer for birdie on six too. I felt very confident there.

“It was really tough, given the windy conditions and the pin positions. I will try to control my game tomorrow. I will stick to the same game plan. Hopefully I can give myself a chance to go for the title,” said the 21-year-old Rattanon, who had earlier earned his 2017 Asian Tour card after finishing inside top-62 on the Order of Merit this season.

Thongchai got off to a good start when he sank an eagle-two on the second hole but slipped back with a bogey on fifth and a double-bogey on 11 as he rued mistakes on club decisions and line reading on the greens.

The 47-year-old Thai recovered with three birdies against a bogey on his way home to stay in touch with the leader at the event hosted by Thai legend Boonchu Ruangkit, a five-time winner on the Asian Tour.

“I played alright. I just had some bad holes where the wind changed directions. I made a few mistakes with the clubs on three to four holes and I read the wrong line for a few holes too. The pins were tough today. You have to putt well on this golf course and you need to hit good iron shots,” said Thongchai, who is currently ranked 52nd in the world.

“We have got one more round to go. Anything can happen. My body is feeling a little weak but I will go back and get some rest. Hopefully I will feel better tomorrow. I will give it my best,” added the three-time Asian Tour Order of Merit champion.

The Boonchu Ruangkit Championship will award a total of nine Official World Golf Ranking (OWGR) points to the winner, given the strength of field.