Home News USA and Australia to fight for bronze 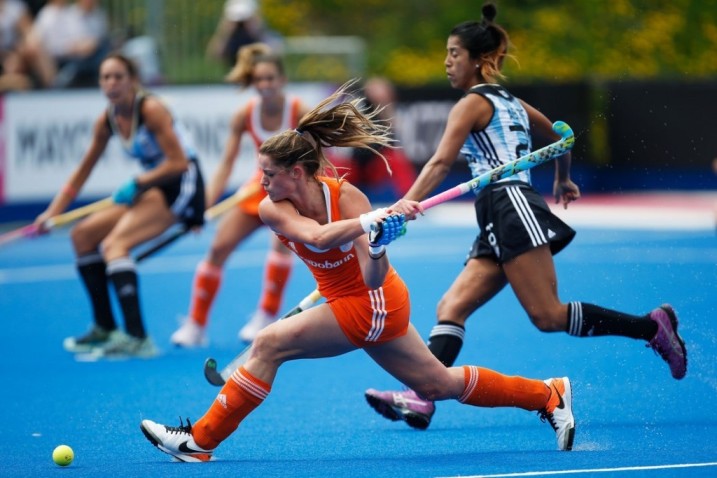 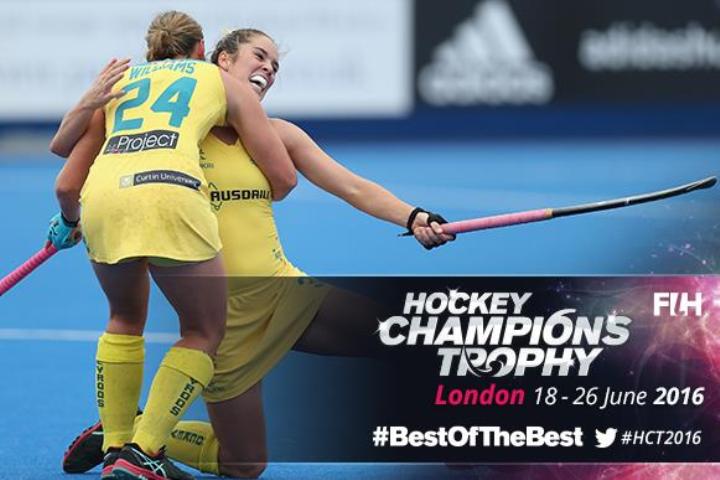 A packed house witnessed the penultimate day of the Women’s Hockey Champions Trophy 2016, with USA and Australia both getting the results that they needed to secure their respective places in the bronze medal match in London, Great Britain.
The day’s opening match – the 400th in women’s Champions Trophy history – was a warm-up for Sunday’s final, with The Netherlands defeating Argentina 2-0 in a contest where both sides did their best not to reveal too much ahead of Sunday’s showpiece.
In the second match of the day, USA guaranteed a top four finish at the event despite being the competition’s lowest ranked team thanks to a 1-1 draw with New Zealand.
The final match of the pool phase saw Australia confirm their place in the bronze medal match with a 4-1 win over home favourites Great Britain, with a sell-out crowd braving thunder and lightening to witness a high quality contest.
The event concludes on Sunday (26 June) with New Zealand taking on Great Britain in the 5-6 classification match at 1400 (UTC/GMT +1) before Australia and USA go head-to-head for bronze at 1615. The showpiece final begins at 1830, with the Netherlands and Argentina both chasing a record-breaking seventh women’s Champions Trophy title.
Match 13: Argentina 0, Netherlands 2
Reigning World and Olympic champions The Netherlands competed the pool phase with an impressive five wins from five matches thanks to a 2-0 victory over title holders Argentina.
2015 FIH Player of the Year Lidewij Welten opened the scoring a minute before half time with a fierce backhand strike from the left of the circle, with Kelly Jonker completing the win two minutes from the end of the contest.
“We played well, we created a lot of chances and would have been able to rest more if we had scored earlier the second goal”, said Netherlands star Caia van Maassaker, who made her 100th appearance for the Netherlands in the contest. “It will always be a tough game against Argentina. We are close opponents and that’s great of course. Tomorrow is a new game, it’s great that we won today but tomorrow we just strike and we have to go again.”

USA sealed their place in the bronze medal match at the Women’s Hockey Champions Trophy thanks to a 1-1 draw against New Zealand in the second match of the day in London. The result ended New Zealand’s hope of competing for a medal, meaning that they will now play in the 5-6 Classification match on Sunday.
USA scored the opening goal in the 10th minute thanks to Kelsey Kolojejchick, with New Zealand replying through Olivia Merry’s penalty corner six minutes after half time. New Zealand replaced their goalkeeper with an outfield player in the latter stages, but it was the Americans who would surely have won the match were it not for three exceptional goal-line clearances from Black Sticks star Brooke Neal.
“Really, we are just looking to close out this tournament, put in a strong performance and play to our best”, said USA’s Julia Reinprecht. “We want to leave the tournament knowing what we have to work on before hitting it hard in training and getting set for Rio (Olympics). That said, we really are eying up the bronze.”
Match 15: Great Britain 1, Australia 4
Australia will play USA in the bronze medal match on Sunday (26 June) after powering to a 4-1 win over Great Britain in front of a packed stadium at the Lee Valley Hockey and Tennis Centre.
The Hockeyroos needed just six minutes of the match to surge into a 2-0 lead, with Kathryn Slattery and Georgie Parker both on target before Sophie Bray’s close range strike reduced the deficit early in the second quarter.
However, third quarter goals from Emily Smith and Jodie Kenny ensured that Australia kept alive hopes of claiming a medal at the event.
“We have been playing pretty well but not winning in recent days, so it was great to get out there, get the goals in the back of the net and get the win”, said 19-year-old Australia striker Grace Stewart, a player who has made a big impression in London. “We drew with USA in the pool game and also played a couple of practice matches against them recently. They are a really good side, but hopefully tomorrow we can get one up on them by giving it all we’ve got and take the bronze.”
Tickets for the women’s Hockey Champions Trophy 2016 are still available and can be purchased by clicking here
For more information and statistics about these games, plus additional quotes from the athletes, visit the official event webpage on FIH.ch