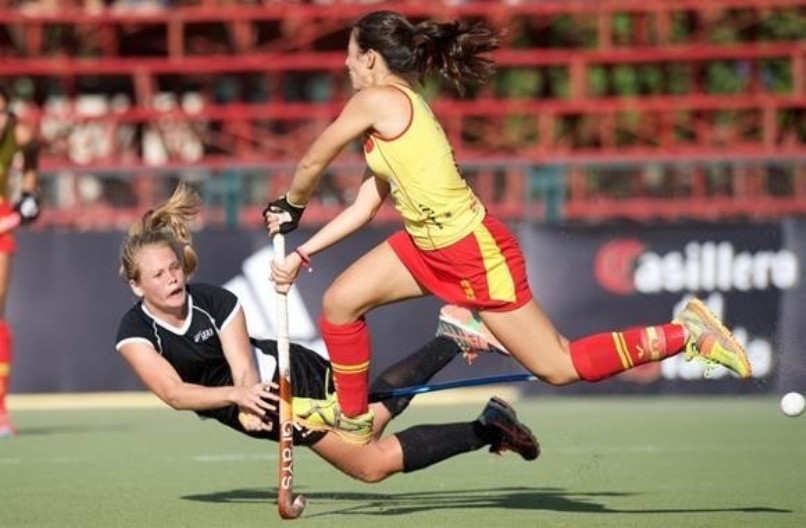 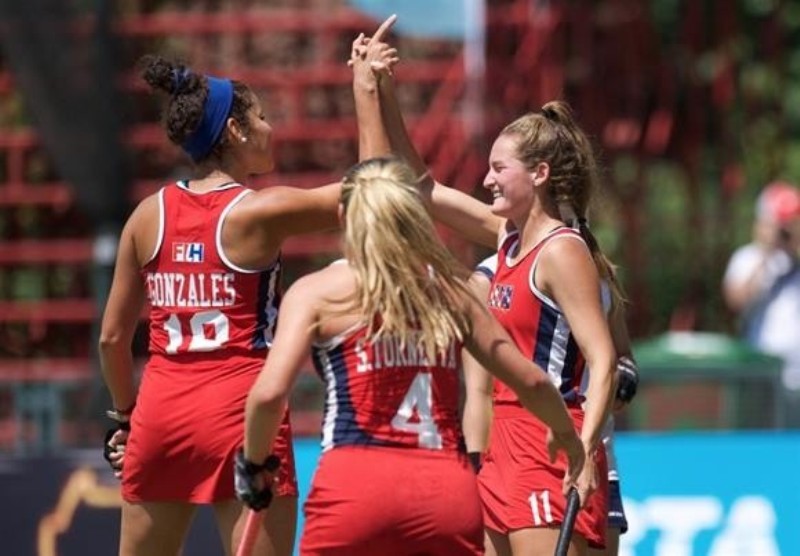 USA, Spain and Belgium joined Netherlands and Argentina in the Quarter-Finals of the women’s Hockey Junior World Cup 2016 in Santiago, Chile following the final Pool A and D matches today.
A 3-2 victory for USA against Korea was enough for them to secure second spot in Pool A behind Netherlands, while Spain and Belgium qualified from Pool D in what proved to be a day filled with drama.
With Pool B and C teams enjoying a rest day today, they will return to the field tomorrow at 14:00 (local) for their final Pool matches.
Here’s a summary of all the day’s action:
Pool A:
USA and Korea played out what was the game of the day as both teams went head to head in the knowledge that the winner was guaranteed a place in the Quarter-Finals. Korea gained an early advantage after only two minutes when Seoyeong Kim scored from open play. Whilst the Asian team looked strong in the early stages, USA drew level after 18 minutes through Margaux Paolino. Erin Matson edged USA further ahead in the 33rd minute and whilst the game continued to go end to end, USA took control of the game when Lauren Moyer scored in the 58th minute.
Korea did not give up and brought the score back to 3-2 through captain Hyejin Cho to give USA a nervy end to the game. Speaking afterwards, USA’s Julianna Tornetta was relieved to get the win. She said: “Korea were very good with a flat defence, that was something that we struggled with a little bit. We couldn’t get wide enough.
They are a really good team – we struggled with their aerials too – they were incredible.” On her experiences so far she said: “Hockey at this level makes you grow physically, mentally – I’m so lucky to be able to be able to play in this environment so that’s certainly a major positive so far.” For the full interview, click here.
On Friday, Netherlands were the first team to qualify for the Quarter-Finals after winning their second match of the tournament against USA. Today they went in to their game against Zimbabwe knowing that a win would guarantee them top spot in the Pool. This incentive inspired the defending champions to record the biggest victory of the event so far as they won 13-0, which included five goals for Frederique Matla.
Pool D:
It was all to play for in Pool D with all teams still in with a chance of qualifying for the Quarter-Finals at the start of the day.
Like the USA v Korea match before them, Belgium v China was a winner takes all game. Perhaps the nerves got the better of Belgium as they went 1-0 down as Qiu Guo scored from a penalty corner after only three minutes. Both teams battled hard throughout the game, with a number of chances wasted from both teams. After the break China doubled their lead, again through a penalty corner, this time converted by Mengling Zhong.
Belgium did not give up however and Marie Ronquetti scored with only two minutes left to play. The drama was left to the last second as Stephanie Vanden Borre scored with the last hit of the ball from a penalty corner to level the score, knocking China out of Quarter-Final contention.
Belgium had to wait for the result of the New Zealand v Spain match to find out their fate. New Zealand needed to win to be in with a chance of reaching the Quarter-Finals but didn’t help their chances when they let Spain’s Lucia Jimenez score after only five minutes. New Zealand had opportunities but Jimenez doubled their lead seconds before the half-time hooter following a mistake at the back from New Zealand.
Spain continued to dominate in the second half, with goals from Lara Panpin and another from Marta Segu to leave the final score 4-0. Spain’s win guaranteed them top spot, with Belgium finishing second – the top two teams from each Pool qualifying for the Quarter-Finals.
Speaking afterwards, Spain’s Head Coach Adrian Lock said: “It was a big win for us but we didn’t play well. I don’t really understand how we won 4-0 as I wasn’t happy with our play at all. I felt even though we weren’t playing well we kept our heads in the game and didn’t get frustrated and took the goals when we had the opportunities to put them away.”
For the full interview, click here.
Tickets for the event, which is taking place from 24 November until 4 December, are on sale and can be purchased by clicking here. Those who cannot attend can watch the livestream of all games provided by the hosts by clicking here.
Fans can find scores, standings, photos, videos and more via the official event website on FIH.ch as well as through FIH Twitter, Facebook and Instagram using the hashtags #HJWC2016 and #RockTheJuniors.
RESULTS
Pool A: Netherlands 13, Zimbabwe 0; Korea 2, USA 3.
Pool D: Belgium 2, China 2; New Zealand 0, Spain 4.