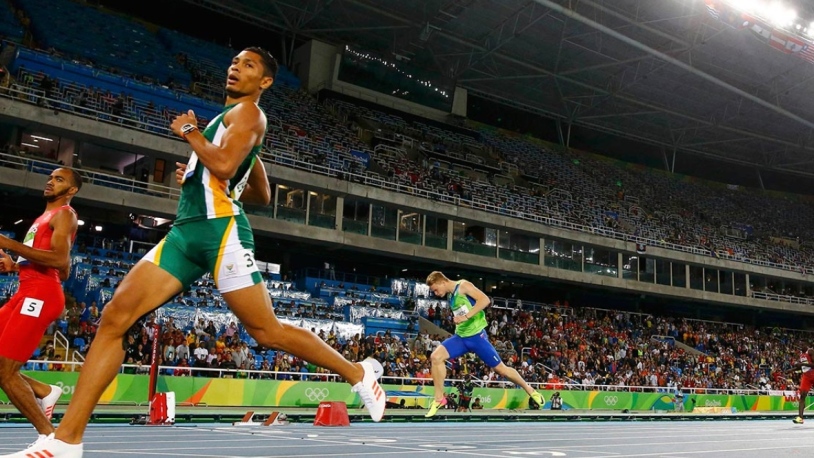 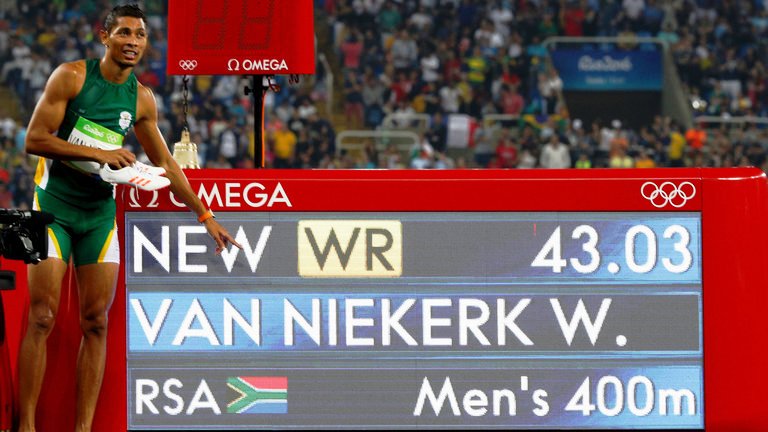 Van Niekerk, running in the unfavoured lane eight, blasted off the final corner to time 43.03sec, 0.15sec quicker than Johnson’s previous world best set in Seville in 1999, a record that had taken on mythical-like standing.

“I believed I could get the world record,” the 24-year-old South African said.

“I’ve dreamed of this medal since forever. I am blessed.”

“Congrats to Wayde on the new world record. I’m happy to be part of a race that made history. We have put this sport on a pedestal,” James said, adding that 400m runners normally have the habit of tying up as they hit the home stretch.

“Usually that’s what happens, the guys slow down a bit! But when you keep going like that, there’s going to be world records. It shows that there’s always room for guys to improve. He just did that and exemplified that.”

Despite Van Niekerk being world champion, his underwhelming heat runs had meant all eyes were on James and Merritt.

The Grenadian set off fast in lane five, Merritt on his coat-tails on the inside with Van Niekerk running solo out wide.

The trio had produced one of the races of the year in the 400m final at the 2015 world championships in Beijing, all going under 44 seconds as the South African emerged victorious.

And it was the same again in Rio, Van Niekerk exploding off the last bend and holding his form through the line in an extraordinary run as all eight runners finished under 44.61sec.

– It was a massacre, says Johnson –

“I have never seen anything like that,” Johnson told BBC, for whom he works as an analyst.

“It is amazing. That was a massacre by Van Niekerk. This young man has done something truly special. He could go under 43 seconds — I tried and failed.

“Being out in lane eight helped him, he was away from James and Merritt. He was running a time-trial.

“That was some style he broke it in,” Johnson said of Van Niekerk, who made sprint history by becoming the first athlete to dip under benchmark times in the 100, 200 and 400m.

Merritt, who was Olympic champion at the Beijing Games in 2008 before serving a 21-month ban for testing positive for a banned steroid in 2010, hailed Van Niekerk.

“It was a crazy race, a great moment in history. The world record was broken, the best man won,” Merritt said.

“I didn’t handle the last part as well as I wanted to. But I got a medal, I’ll take it, get my day’s rest and get ready for heats of the 200m.

Britain’s Matthew Hudson-Smith finished last in 44.61sec, saying: “It was just mental, how quick that was, to be part of that.

“I thought I was gaining on them and then he (Van Niekerk) kicked in the back straight and I thought, ‘What was that?’.” – Agence France-Presse