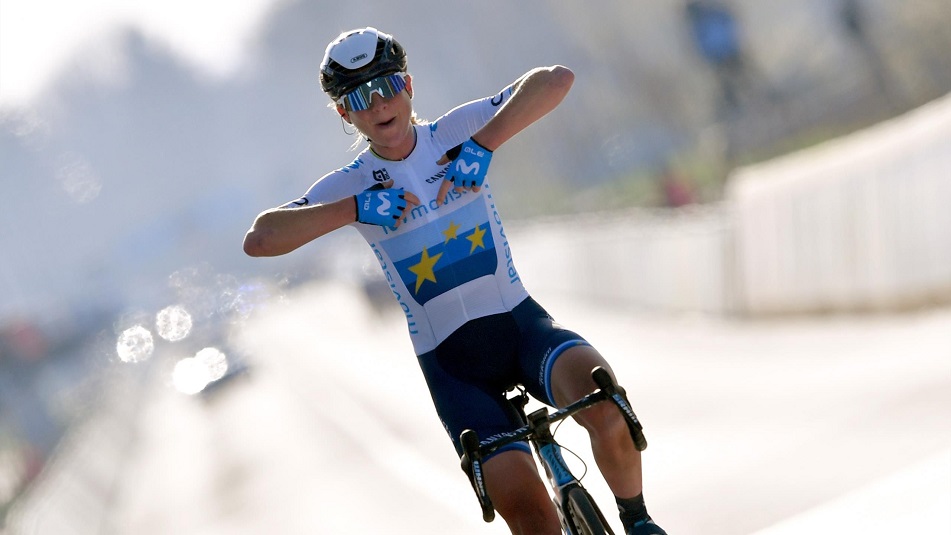 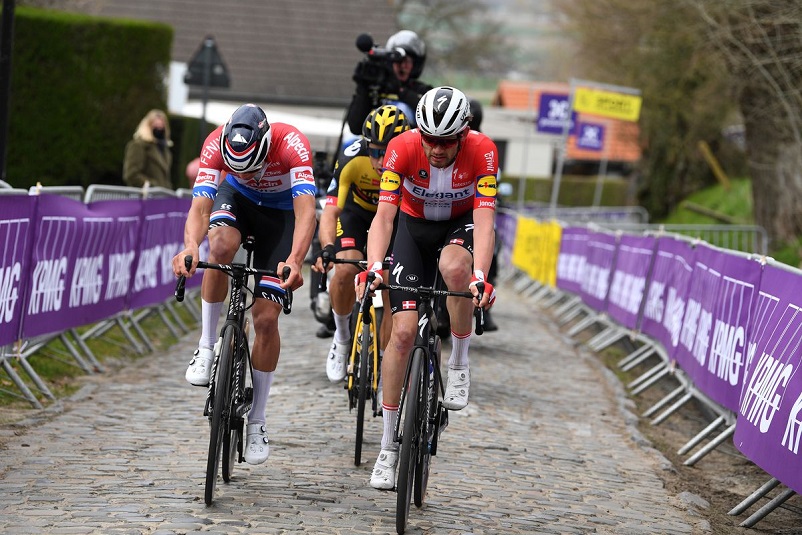 The Dutch star claimed a solo victory after she dropped all her rivals on the Paterberg, inside the last 15km. The Dane National Champion outsprinted the 2020 winner Mathieu Van der Poel (Alpecin-Fenix) after they managed to drop Wout Van Aert (Jumbo-Visma) on the Oude Kwaremont, 17km from the finish.

“I felt good in the last kilometres so I decided to try and trust my sprint,” Asgreen explained after taking his eighth professional win, a total which includes two Danish National individual time trial (ITT) titles and the E3 Saxo Bank Classic at the end of March.

“Going into the last kilometre, I got Mathieu on the front and I decided to stay in the wheel so I could decide when I wanted to go. It was a really really hard race. We were both on the limit.”

“I’ve been waiting for so long and to do it with a new team, Movistar, I’m super proud,” Van Vleuten explained as she took her second victory with the Spanish outfit, a few days after she won Dwars door Vlaanderen. “The girls worked super hard for me and to finish it out like this, I think we’re going to celebrate really big tonight!” 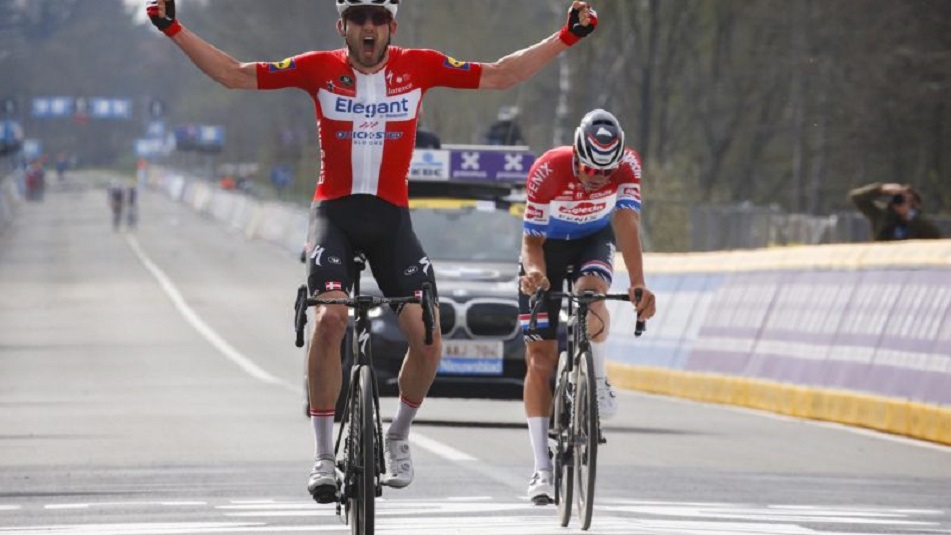 A pack of 175 riders rolled out from Antwerp with dreams of chocolate sweets and glory, two of the Flanders specialties up for grabs on this Easter Sunday. Attacks flew from the start and a strong breakaway eventually created a split. Stefan Bissegger (EF Education-Nippo) initiated the day’s breakaway, with the support of Mathias Norsgaard (Movistar Team), Jelle Wallays (Cofidis), Fabio Van Den Bossche (Sport Vlaanderen – Baloise) and Mathijs Paasschens (Bingoal Pauwels Sauces WB). Hugo Houle (Astana – Premier Tech) and Nico Denz (Team DSM) joined them after 35km and the gap increased up to 13’ after 70km.

Jumbo-Visma’s Edoardo Affini drove the bunch with support from Tim Declercq, sporting an Elegant – Quick-Step jersey instead of the usual Deceuninck – Quick-Step, with 155km to go. From there, the intensity only increased, most notably some 20km later, in the first ascent of the Oude Kwaremont.

Elegant – Quick-Step accelerated up the Molenberg, as the race entered the last 100km, with Kasper Asgreen setting the pace ahead of Julian Alaphilippe and their rival Wout van Aert. The gap to the leaders was down to 6’ and riders kept accelerating on the Berendries – where the 2019 UCI Road World Champion Mads Pedersen (Trek-Segafredo), 2nd in the Ronde Van Vlaanderen in 2018, got dropped off the back – and the Valkenberg.

The quicker pace saw the gap to the front of the race drop down to 3’15’’ for the last 80km of the day. A mass crash with 66km to go led to the abandons of two of Mathieu Van der Poel’s Alpecin-Fenix teammates – Oscar Riesebeek and Silvan Dillier – while Elegant – Quick-Step’s duo of Alaphilippe and Asgreen were on for a brief chase ahead of the second ascent of the Oude Kwaremont, where the race went upside down.

At the front, Bissegger dropped everyone with 56km to go. The bunch also exploded with Van der Poel and Asgreen trying to catch their rivals off guard. A nervous bunch got back together only to see Alaphilippe attack up the Koppenberg. The Frenchman joined Bissegger and saw seven more riders bridge the gap with 43km to go: Van Aert, Van der Poel, Marco Haller (Bahrain Victorious), Anthony Turgis (Total Direct Energie), Christophe Laporte (Cofidis), Tim Wellens (Lotto Soudal) and Tom Pidcock (Ineos Grenadiers).

Haller attacked again but more riders came back for the Taaienberg. Asgreen upped the tempo and bridged the gap to the Austrian leader, with only Alaphilippe, Van Aert, Van der Poel and Dylan Teuns (Bahrain Victorious) able to follow. Turgis managed to bridge the gap on his own with 28km remaining, and Asgreen immediately counter-attacked, followed by Van Aert and Van der Poel.

The three leaders collaborate towards the final ascent of the Oude Kwaremont, where Van der Poel put the hammer down. Asgreen got back on the run-in to the Paterberg while Van Aert dropped 12 seconds. A group of nine chasers joined Van Aert with a gap under 30’’ with 10km to go –  but they never managed to get back and could only witness from afar how Asgreen got the best of Van der Poel in the final sprint. 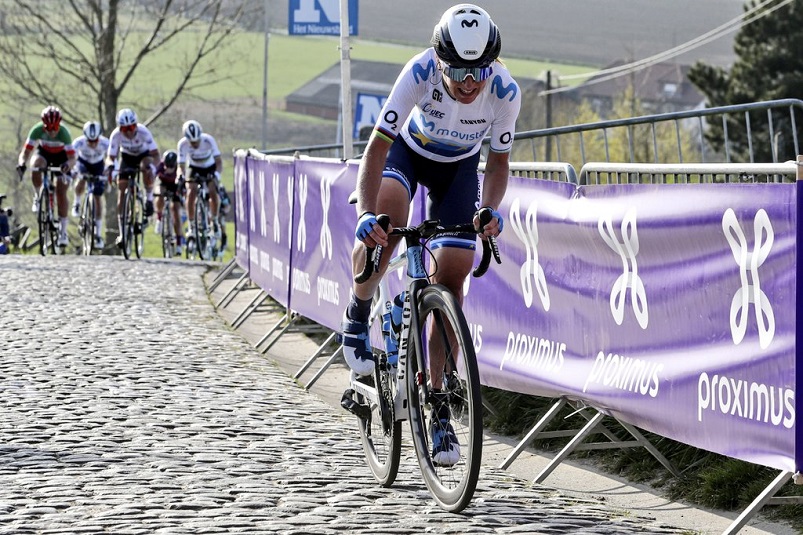 The women’s race began early in the afternoon with a blazing pace from the start in Oudenaarde. No attacker managed to stay at the front with the pack covering 40.2km in the first hour. Femke Markus (Parkhotel Valkenburg), Rozanne Slik (Bingoal Casino – Chevalmeire), Emilie Moberg (Drops-Le Col supported by Tempur), Inga Česuliene (Aromitalia Basso Bikes Vaiano) and Amber Aernouts (Doltcini – Van Eyck – Proximus Continental Team) momentarily opened a 50’’ gap but they were also reeled in ahead of the Karel Martelstraat.

The pace kept increasing and Anna van der Breggen (Team SD Worx) almost got dropped due to bad positioning while Lotte Kopecky’s Liv Racing and Annemiek van Vleuten’s Movistar Team Women were driving the bunch on the Berg Ten Houte, just inside the last 50km. Van Vleuten accelerated in the following Kanarieberg, with Marianne Vos immediately on her wheel.

As the riders caught their breath, Audrey Cordon-Ragot (Trek-Segafredo) went on the move ahead of the Taaienberg, opening a 12’’ gap at the summit. The French National Champion increased her lead to 45’’ as she entered the last 30km.

Soraya Paladin (Liv Racing) tried to catch Cordon-Ragot on her own while Team BikeExchange led the main group. The two attackers were reeled in as the race entered the last 20km while Lotte Kopecky had to chase hard after a crash just ahead of the final ascent of the Oude Kwaremont.

Van der Breggen set a strong pace up the Oude Kwaremont before Van Vleuten put the hammer down on the Paterberg. With a gap of 5’’ to a seven-woman group over the top, she pushed her lead on the way to Oudenaarde, claiming a spectacular solo victory ahead of Lisa Brennauer (Ceratizit – WNT Pro Cycling Team) and Grace Brown (Team BikeExchange). – www.uci.org