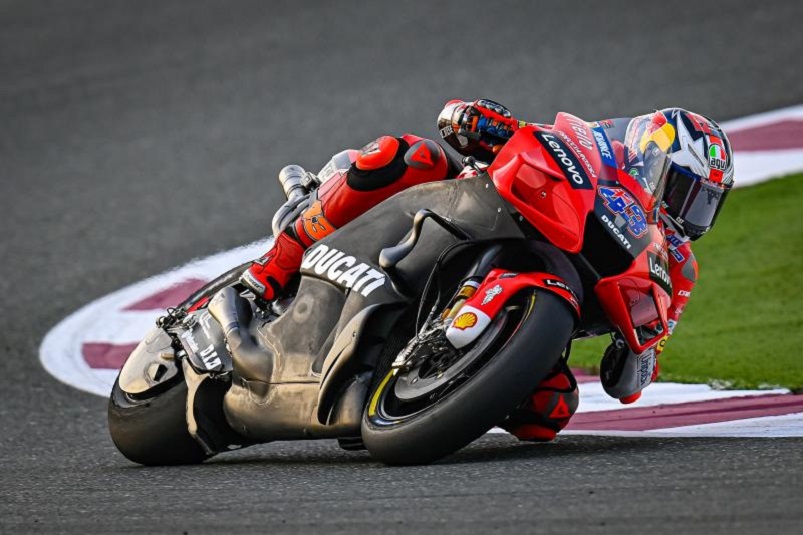 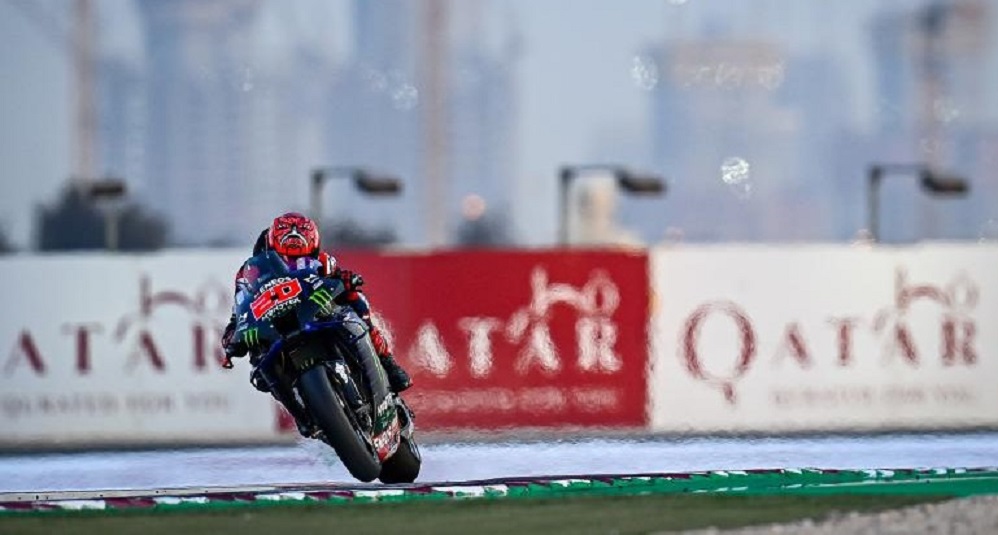 It was an Iwata factory 1-2-3 on the Day 4 timesheets at the Qatar Test, Miller’s Day 3 time remains the fastest overall

In terms of new tech, nothing too out of the ordinary was seen on Thursday. However, track conditions couldn’t have been more perfect for Day 4 of testing, handing riders a fantastic opportunity to get some crucial laps under their belts with time running out before the start of the season.

Pitlane reporter Simon Crafar revealed that Yamaha have been looking excellent in race pace trim. One of those riders is of course Viñales and it was a busy day for the Spaniard who had three bikes in his garage: his ‘standard’ one, a T1-plated carbon bike and the stunning white and red liveried package. Viñales was also once again seen doing plenty of practice starts at the end of pitlane and at the end of the day’s play, he set that table-topping time. The number 12 confirmed he is concentrating hard on his starts and the opening handful of laps, with a big race simulation coming on Friday.

Teammate Quartararo did sit top in the closing stages but was edged down to P3 at the chequered flag, the Frenchman not quite going as quick as yesterday and now sits third on the combined times behind Jack Miller (Ducati Lenovo Team) and Viñales. “Many things” to test was the order of El Diablo’s day, Quartararo confirmed that he feels comfortable on the new chassis and the pace he has is “great.” He’s looking for another step on the final day.

Valentino Rossi (Petronas Yamaha SRT) was very pleased after Wednesday’s track action and was pleased with the new parts that Yamaha have been trying so far. On Thursday, The Doctor set his fastest lap of the test so far – a 1:53.993 – and is in good spirits, with Rossi saying he feels like “a real rider” again. Petronas Yamaha SRT Team Manager Wilco Zeelenberg confirmed that Morbidelli has been trying lots of different settings to enable him to get the feeling he had in 2020, and the man himself confirmed he’s “really happy” overall but, as always, there’s areas to work on during the final day.

Ducati’s fastest rider on Day 3 was Francesco Bagnaia (Ducati Lenovo Team) and the Italian was another to set his best time of the test so far. Speaking on After the Flag, Pecco was happy with his 1:53.444 but admitted it was by no means a perfect lap. Bagnaia was a lot happier with his race pace though, the new factory Ducati recruit has been quietly going about his business and confirmed he used Ducati’s new aero package in Thursday’s race simulation. 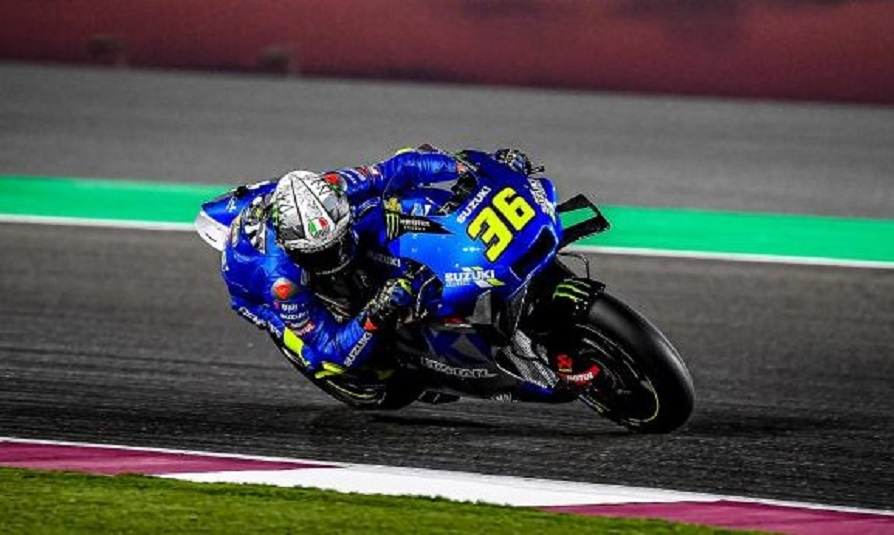 Second best Ducati was Pramac Racing’s Johann Zarco. The Frenchman set the most laps of anyone on Day 4 – 71 laps completed in total – and ended the session in P9, with Zarco confirming that he worked a lot on race pace but had different feelings – not all good – than Wednesday. In addition, Zarco clocked an earth-shattering top speed of 357.69km/h down the start/finish straight – a new unofficial top speed record.

A couple of places behind the number 5 was Miller and after setting the fastest time of the test so far on Wednesday, Thursday looked like it was a day working more towards race pace – P11 for the Australian. Miller confirmed that they never put a new soft tyre in and it was another great day, with the race simulation going well but he thinks there’s a couple of little things with the setup to aid him and Ducati in race trim.

Fastest of the rookies, despite a crash at Turn 16, was Jorge Martin (Pramac Racing). A 1:54.483 was set by the Spaniard, that’s over half a second quicker than he’d previously managed in Qatar. 42 more laps are on the board for Martin who finished just 0.022s ahead of Enea Bastianini (Avintia Esponsorama Racing), the latter finishing P15 on another great day for the Italian. Luca Marini (SKY VR46 Avintia) also had a seamless day at the office by the looks of things, the tall Italian set a 1:55.022 to end Day 4 in P20, 1.778s away from Viñales’ pace. Overall, the three Moto2™ graduates have been looking great.

Aprilia Racing Team Gresini’s Aleix Espargaro finished P5 on the timesheets and was overall happy with his work. Stability and rear grip have been improved, as well as being able to go fast with used tyres so all is looking up in the Noale camp. Espargaro had a small crash at Turn 4 while teammate Lorenzo Savadori – who finished P23 on the timesheets – also suffered a crash at the same corner. 40 more laps were completed on the RS-GP for rookie Savadori.

Team Suzuki Ecstar duo Joan Mir and Alex Rins finished line astern on the leaderboards, P6 and P7 respectively for the two Spaniards. It’s been a relatively quiet test for the World Champions but both Mir and Rins dipped into the 1:53s for the first time at the test, so judging from the timesheets at least, it doesn’t look to be going too bad at all.

The biggest news on Day 4 came from the Honda camp. In terms of updates on new parts, test rider Stefan Bradl, who recovered from a sore neck after his Day 3 Turn 2 crash, was seen debuting a new aero design for the Japanese manufacturer. The new-look design features some notable additions to the fairing, a big change from what we’ve seen before from HRC, who also testing a different aero package earlier in the test with Bradl.

It was another tough day in terms of crashes for Honda though. Alex Marquez (LCR Honda Castrol) suffered a nasty highside on the exit of Turn 9, which resulted in the double World Champion picking up a small metacarpal fracture in his right foot. The Spaniard headed to the hospital for some mandatory checks, fingers crossed it doesn’t see him miss too much track time. Bradl crashed at Turn 1 and early on in the day and Pol Espargaro (Repsol Honda Team) went down at the opening corner for his first crash in HRC colours – thankfully for both Repsol donned riders, no injuries were picked up.

Pol Espargaro was the fastest Honda on Day 3 and ended Thursday’s running in P10, 65 laps were completed for the Spaniard who continues to impress ahead of the 2021 campaign. Takaaki Nakagami (LCR Honda Idemitsu) set his best lap on his 52nd and final circulation of the day, P12 for the Japanese rider, one place ahead of Bradl in P13.

KTM’s quiet Qatar Test continued on Day 4. Brad Binder (Red Bull KTM Factory Racing) was the quickest RC16 rider out there, setting a 1:54.691 – his best lap of the test so far. Factory teammate Miguel Oliveira was P18 with a best time of a 1:54.735 as both 2020 race winners continue to untroubled the fastest times so far.

In the Tech3 KTM Factory Racing ranks, 19th fastest Danilo Petrucci set his best time of the test so far as he continues his adaptation from Ducati to KTM machinery. Petrucci crossed the line 49 times on Day 4, with teammate Iker Lecuona completing a further 40 laps. The latter suffered a crash at Turn 12, the young Spaniard was perfectly ok though.

Another busy day in Doha draws to a close. Four days down, one to go. 2021 pre-season testing for the premier class will come to an end on Friday evening, it’s going to be a huge day for every rider, team and manufacturer. Keep up to date with it all across MotoGP™’s social media channels, right here on motogp.com, via Live Timing and, of course, on After the Flag at 18:30 CET. Don’t miss any of the action!