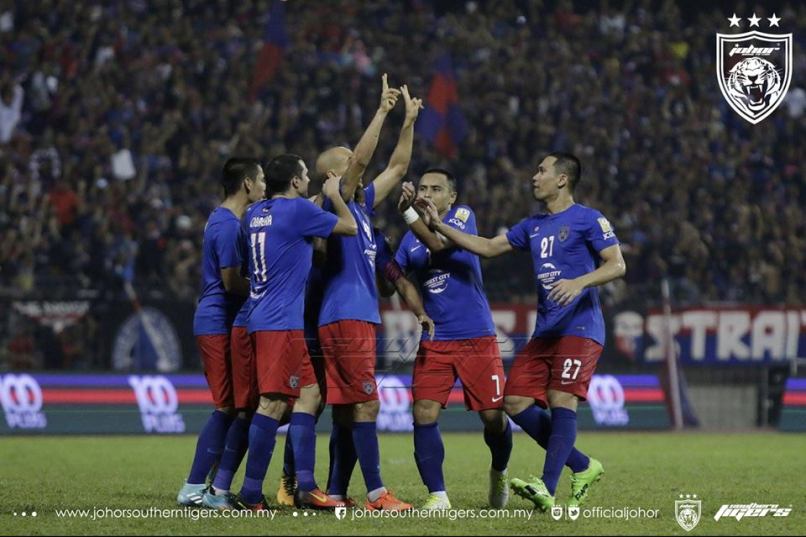 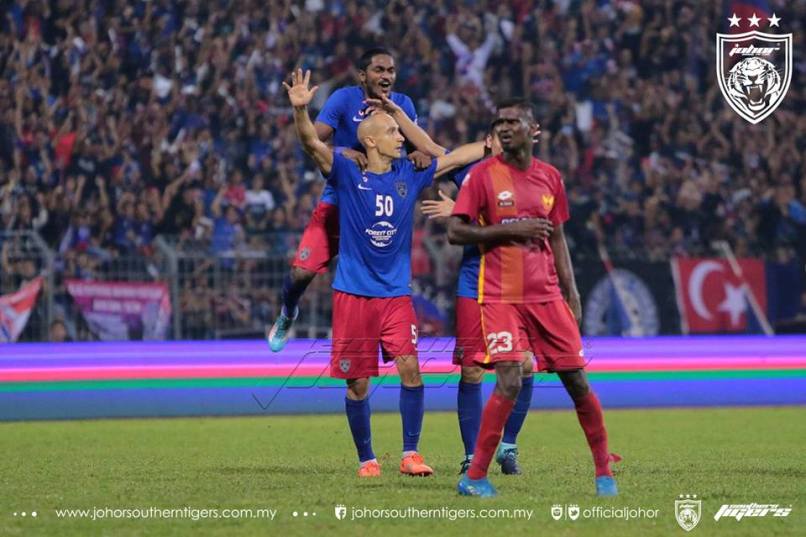 Johor Darul Takzim are the Malaysian Super League champions – with a big dose of help from Pahang who defeated closest rivals Kedah 2-1 in Kuantan on a night the Southern Tigers lost to Selangor by a similar margin in Selayang.

With only three matches remaining the Johor outfit have an unassailable 11 points lead over Kedah after 19 matches. JDT are on 45 points while Kedah are on 34.

Despite the defeat at the Selayang Stadium the champions were all smiles – putting up their four fingers as they clinched the title for the fourth time – a new record in the M-League.

Still, Selangor fans celebrated the win over JDT. The champions too celebrated after news came through that Kedah lost in Kuantan and celebrated with broad smiles as they posed for pictures on the field with a clear message that “JDT are the champions” and the new kingpins of Malaysian football and an eye on the Malaysia Cup.

For JDT’s towering Brazilian defender Marcos Antonio it is another feather in his illustrious career with the team – part and parcel of the team that won the League Cup in 2014, 2015, 2016 and 2017 – and the only foreigner to have achieved that.

JDT were in front after 39 minutes with a Natxo Insa’s goal – who unleashed a booming unstoppable shot that beat Selangor custodian Norazlan Razali, a former JDT player himself.

However, the Red Giants drew level after 59 minutes. It was another JDT player Amri Yahyah who made it count with an equally unstoppable shot that beat JDT keeper Izham Tarmizi Roslan.

Selangor’s Indonesian international Andik Vermansyah stopped the JDT hearts with the winner on 77 minutes. After this Norazlan took over the show with some remarkable reflex saves to deny JDT.

Pahang’s favour at the Darulmakmur Stadium saw Yamil Romero giving the Elephants the lead in the 64th minute but Kedah equalised Syafiq Ahmad after 77 minutes.

Pahang’s hitman Matheus Alves hit the winner in the 80th minute and it was all over for the Red Eagles, the FA Cup champions. Pahang are in third place with 33 points.

In other matches Kelantan held Felda United to a 1-1 draw at the Sultan Mohd IV Stadium in Kota Baharu. The draw left Felda United fourth place with 30 points – ahead of Selangor (5th) and Perak (6th) on goal difference.