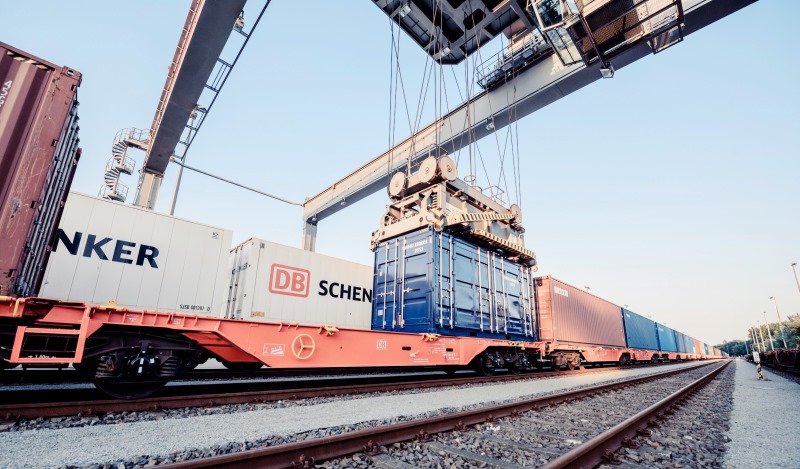 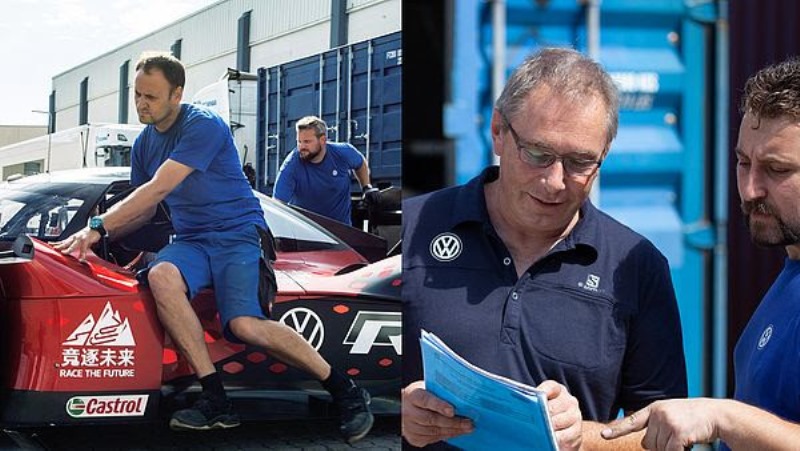 Via Poland, Belarus, Russia and Kazakhstan, along the Silk Road, to China

Volkswagen’s trip to China will have as little impact as possible on the environment, as the brand once again looks to put the electromobility of the future on top on Tianmen Mountain: the Volkswagen ID.R is also adopting unusual, electrical methods for its logistical challenges. The 500-kW (680-PS), fully-electric sports car – and pioneering ambassador of the Volkswagen ID. family – will be transported along the Silk Road to the foot of Tianmen Mountain by freight train.

With it will travel the material required for the record attempt on the road to “Heaven’s Gate”, which is set against the breath-taking backdrop of Tianmen National Park. The ID.R has chosen its preferred mode of transport for its trip to China, via Poland, Belarus, Russia and Kazakhstan: fully-electric1.

The two 40-foot and two 20-foot containers will take roughly three weeks to complete the 11,000-kilometre journey. By using this form of transport, Volkswagen is saving about 85 percent of carbon dioxide emissions (CO2) and 93 percent of sulphur dioxide emissions (SO2) compared to travelling by air freight, which is the more conventional mode of transport for long distances.

“We are using the ID.R programme to show how exciting and high-performance e-mobility can be,” said Volkswagen Motorsport Director Sven Smeets.

“The records set on Pikes Peak, the Nürburgring-Nordschleife and at the Goodwood Festival of Speed show what a good job our engineers have done in this regard. However, they are not the only ones contributing to this project with surprising and clever solutions: our logistics experts are also repeatedly coming up with ground-breaking ideas. For the first time in the 50-year history of Volkswagen in motorsport, a race car will be transported to its destination by freight train. That contributes significantly to making the record attempt on Tianmen Mountain as environmentally sound as possible.”

On water, land and in the air – Volkswagen has mastered a wide range of logistical challenges during its spectacular motorsport outings around the world in the World Rally Championship, at the Rally Dakar, and during the record attempts with the ID.R – such as the one on Pikes Peak. Now, for the first time in over 50 years of Volkswagen motorsport, a race car and any necessary material will primarily be transported to its destination by rail.

Two blue 40-foot containers and two 20-foot containers have already boarded a train in Hamburg and set off for Chongqing, China. The four containers will only be transported by truck from Hannover to Hamburg and for the final miles to the foot of Tianmen Mountain. Once on site, the team will be completely self-sufficient with the equipment it has transported – such as with an environmentally-sound, glycerin powered generator, which supplies the entire team with electricity, as well as charging the ID.R.

On the way to Tianmen: breath-taking scenery
Volkswagen Motorsport’s four blue containers, which are being transported by logistics partner Hellmann Worldwide Logistics, will travel through some truly remarkable scenery on their way to the breath-taking destination at Tianmen Mountain. After being loaded in Hamburg, the four containers pass Berlin and Warsaw before switching to a different rail system in Brest, in Belarus.

This system then takes them through Moscow and Yekaterinburg in Russia, Iletsk in Kazakhstan, and on to the border station of Alashankou in China. Once there, they will return to the European rail system and continue their journey through Chengdu and on to Chongqing.

Whilst travelling along the Silk Road, they will also cross the area, in which the Race Touareg enjoyed success at the Silk Way Rally in an earlier era of Volkswagen motorsport in 2009 (Kazan–Turkmenbashi–Darvaza) and 2010 (St. Petersburg–Volgograd–Sochi). The ID.R will then pass the Gobi Desert and its foothills, as well as many mountain ranges and lakes.

During its epic journey, this special load will cross seven time zones and travel roughly a quarter of the way around the earth.

Valuable luggage: the environmentally-sound generator for charging the ID.R

At the foot of Tianmen Mountain, Volkswagen will be dependent on a generator to charge the ID.R and supply the team with electricity. Before the end of the year, the choice was made to use an extremely conventional-appearing generator, which uses glycerin instead of the usual diesel.

This liquid – in chemical terms a sugar alcohol, obtained as a by-product of, for example, the production of bio-diesel – burns virtually without any harmful emissions or residues. Glycerin itself is non-toxic and is even approved as an additive in the food and cosmetics industries.

As you celebrate your 20th anniversary with Volkswagen, the record attempt on Tianmen Mountain throws up a new challenge, as far as logistics are concerned. What are the challenges?
Lutz Meyer: “China is indeed uncharted territory for us, from a logistics perspective. And transporting the material by rail is also a first for Volkswagen Motorsport. Sending the ID.R to Tianmen Mountain on the back of a train is the best solution for us. The fact that it will be travelling electrically is perfectly in line with our concept. This minimises the amount of time spent on roads. It is hardly possible to complete a journey like this with fewer emissions.”

What are the peculiarities when a load like the ID.R crosses seven time zones and six countries on rails, travelling a quarter of the way around the earth in the process?
“Although the journey goes through Germany, Poland, Belarus, Russia, Kazakhstan and China, the customs process is surprisingly simple: our containers leave Europe and receive their exit stamp in Poland, and are then given an entry stamp at the Chinese border. The freight will switch rail systems twice – and in less than three weeks, it will reach its destination. When you consider the 11,000-kilometre route and the extremely varied landscape, that is truly remarkable.”

Is this means of transport safe and secure? After all, the ID.R is a prototype and the product of a lot of expertise …
“The railway is an extremely reliable transport solution. Furthermore, the entire journey will be monitored and GPS ensures that we know where our containers are at all times. Data is transmitted to us at regular intervals, which allows us to know if any light has penetrated the container, as well as the temperature and humidity inside the container.”

1 The Hamburg-Chongqing railway line, which spans over 10,490.35 kilometres, is 97% electrified. Only a short section of about 300 kilometres in Kazakhstan is not electrically drivable.