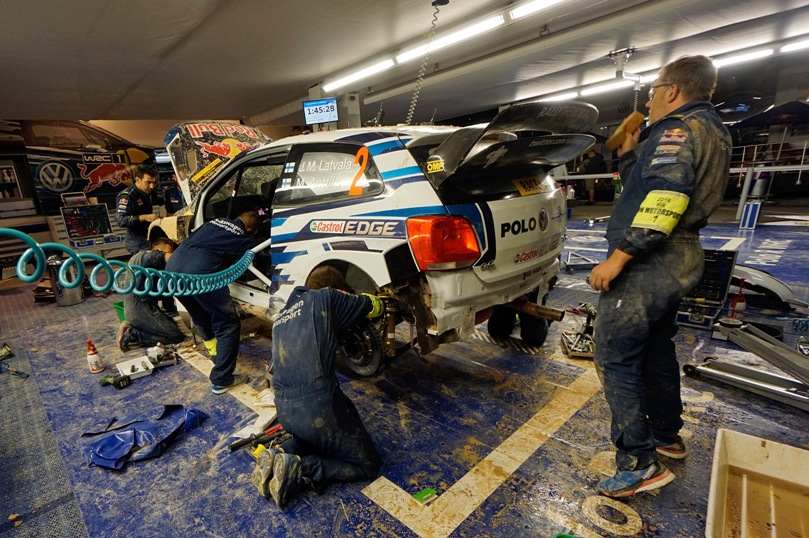 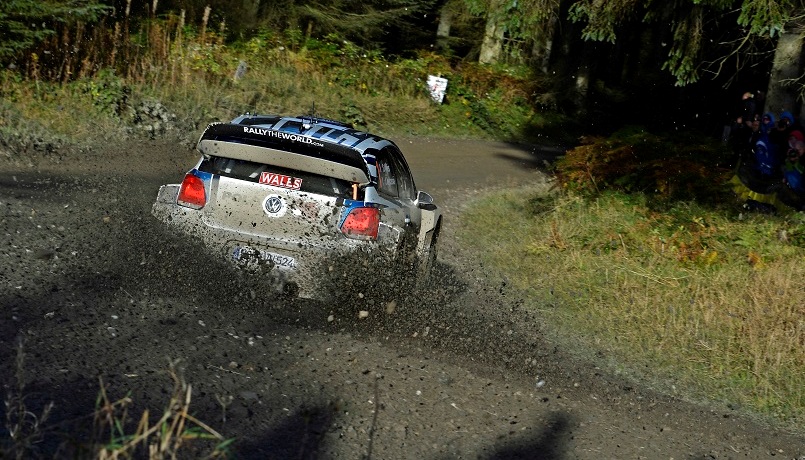 Polo R WRC, Ogier and Ingrassia – the winning combination since 2013

Mud, mud, glorious mud – Volkswagen has big plans at the Rally Great Britain in Wales. The works team from Wolfsburg could win the Manufacturers’ title for the fourth year in a row at the penultimate round of the 2016 FIA World Rally Championship (WRC).

To repeat the feat achieved in 2013, 2014 and 2015, and wrap up the title before the end of the season, regardless of other results, Volkswagen must maintain a lead of 43 points going into the final race. The lead currently stands at 62 points.

Third and fifth place for Sébastien Ogier/Julien Ingrassia (F/F) and Jari-Matti Latvala/Miikka Anttila (FIN/FIN) would suffice – as would victory for one of the two duos in the Polo R WRC. Andreas Mikkelsen/Anders Jæger (N/N) are at the business end of the battle for second place in the Drivers’ and Co-Drivers’ Championship – they go into the final two rallies in Great Britain and Australia level on points with Thierry Neuville/Nicolas Gilsoul (B/B, Hyundai) in second place behind world champions elect* Ogier/Ingrassia. Latvala/Anttila could also still finish runners-up in the world championship.

Demonstration drive with a world championship bonus: Ogier/Ingrassia line up as favourites

Newly-crowned world rally champions* for the fourth time in a row, Sébastien Ogier/Julien Ingrassia line up for a kind of demonstration drive with a world championship bonus in Great Britain. They could yet be the key in the race for the Manufacturers’ title. The champions are nominated for Volkswagen, together with Jari-Matti Latvala/Miikka Anttila. Ogier/Ingrassia and the Polo R WRC have proven to be the winning combination for the last three years in Wales. In the two years prior to 2013, the rally in Wales was won by current Volkswagen duo Latvala/Anttila, who were driving for M-Sport-Ford at the time.

Five duos go into the Rally Great Britain still with the chance of finishing second overall in the Drivers’ and Co-Drivers’ Championship. In pole position is the Volkswagen pairing of Andreas Mikkelsen/Anders Jæger. They are currently second behind world champions elect Ogier/Ingrassia. Level with them on points, but in third place due to poorer individual results, are their favourite adversaries and friends Thierry Neuville/Nicolas Gilsoul (B/B, Hyundai). Hayden Paddon/John Kennard (NZ/NZ, Hyundai) and Dani Sordo/Marc Martí (E/E, Hyundai) are 13 and 16 points back in fourth and fifth place respectively. Jari-Matti Latvala and Miikka Anttila in the third Polo R WRC are 23 points off second place in sixth. 25 points are on offer for a win, with a further three points up for grabs for the fastest time on the closing Power Stage.

Classic reloaded: once through the Welsh forests in the opposite direction, and a foray into England

Whether “Sweet Lamb”, “Hafren” or “Myherin” – a Rally Great Britain without these classic stages are simply unthinkable. This year, however the first two of the stages will be tackled in the opposite direction for the first time since 1995, and “Myherin” for the first time ever. These may not be the most technically demanding of the route through the Welsh forests, but the pace notes must still be spot on. The main reason for this is the unpredictable weather in the UK.

Fog, rain, snow and ice transform the gravel into mud and sludge, resulting in rapidly changing levels of grip at the Rally Great Britain. For the first time this millennium, the drivers and co-drivers will also visit England – although only briefly. For 1.80 kilometres, to be precise. That is the length of the “Cholmondeley Castle” stage, which rounds off Saturday’s action. The last time the Rally Great Britain took place in England was in 1999.

2002 Jari-Matti Latvala, 2006 Andreas Mikkelsen – the two Volkswagen drivers still fighting for second place in the world championship at the Rally Great Britain return to Wales with fond memories. It was here that they both launched their WRC careers. Latvala has already made 14 appearances in the Welsh forests, Mikkelsen six. Latvala finished either second or third to take his place on the podium in 2008, 2010 and 2013, and won the Rally Great Britain in 2011 and 2012. Mikkelsen made it onto the podium for the first time last year, courtesy of a fine third place.

Quotes ahead of the Rally Great Britain

Sébastien Ogier, Volkswagen Polo R WRC #1
“I am very happy to travel to the Rally Great Britain as world champion. However, I remain just as motivated, as we also want to defend the Manufacturers’ title for Volkswagen. The Wales Rally GB is one of the rallies that is the most steeped in history. It took me a while to find my feet in Wales. The learning process was probably longer here than at any other rally. I have won here three times since joining Volkswagen. After everything I’ve been through in Wales, I can now say that I feel right at home here. An important factor is, as it is every year, the weather. If no rain is predicted in the weather forecasts, you can actually still count on there being rain. I expect very wet and foggy routes, which are very typical for this time of year there. The fans are absolutely crazy, as thousands of spectators turned out to cheer us on every year, despite the poor weather. I am particularly looking forward to that.”

Jari-Matti Latvala, Volkswagen Polo R WRC #2
“The rally in Wales is one of my very favourite rallies. As I was really quick on the gravel stages in Spain last time out, I will also be quick in Wales. I have no doubt about that. However, the season has been really difficult for me so far. As such, I hope I can finish strongly at the final two rounds of the season and make it into the top three in the Drivers’ Championship come the end of the year. The surface can be very tricky in Wales. If it has rained heavily overnight, the tracks can be very greasy and slippery for the cars starting further down the order. That is typical for Wales. However, this year’s rally starts two weeks earlier than in recent years, so I hope it will not rain quite as much. I drove my first rally there in 2002, so have greater experience in Wales than at any other rally – I am certain that I can challenge for victory there.”

Andreas Mikkelsen, Volkswagen Polo R WRC #9
“I particularly like the layout of the special stages at the Rally Great Britain. I always enjoy driving there. Driving the Polo at the limit on the muddy, slippery surface is very tricky. Like every year, we will have to be prepared for rain and difficult conditions in Wales. The crash in Spain meant I dropped valuable points in the championship and my friend Thierry Neuville has drawn level on points with me in the Drivers’ Championship. It is going to be a tough battle with him for second place. My goal is obviously to be second come the end of the season. Anders and I will focus solely on our own performance and try to get the maximum out of the final two races. We have already had a few great battles with Thierry this season, and Wales will be no different.”

Sven Smeets, Volkswagen Motorsport Director
“After Sébastien Ogier and Julien Ingrassia’s fantastic success in the Drivers’ and Co-Drivers’ Championship, we are now in a position to wrap up the Manufacturers’ title in the World Rally Championship at the Rally Great Britain, regardless of other results. That is unquestionably our goal. As such, we are very motivated and confident that we can win the title in Wales. To do so, everyone in the team must go about their work in a focused and conscientious manner. Andreas Mikkelsen and Jari-Matti Latvala can both still finish runner-up in the Drivers’ Championship – we will also be working hard to achieve this goal. Both have fond memories of this classic, and both launched their careers here.”

What exactly does the Volkswagen Motorsport weather crew analyse, and where does your data and information come from?
Timo Gottschalk: “We have various people out on the stages. They measure the ground and air temperature, as well as the wind speed. However, they also keep an eye on the sky, measure the strength of the rain, see how damp and muddy the surfaces of the roads are, and check out the state of the ruts after the first loop. I receive all this data and enter it in a list. Our meteorologist Silke Hansen then uses this data to make her forecasts.”

How important is the weather crew at the Rally Great Britain?
Timo Gottschalk: “The tyre selection – hard or soft – is one of the key factors at the Rally Great Britain. To allow drivers to make this decision, they have to know what to expect out on the route: what are the ground and air temperatures? How damp or dry is it? The weather crew provides all this information.”

This year’s Rally Great Britain is taking place two weeks earlier than last season. How will this affect the special stages?
Timo Gottschalk: “As far as the weather is concerned, it should be a bit more pleasant and not quite as cold as last year. The ground temperature could also be a bit higher. However, two weeks is not an awful lot – the weather could be exactly the same as it was last year. In Wales, it is generally very unsettled and hard to predict. You can experience all four seasons in just one week.”

Number for the weekend: 555

The battle between Finland and France is an eternal one in the World Rally Championship. Ahead of the 555th race in the WRC, France currently has 181 wins to its name, Finland 176. The two nations, which are by far the most successful in the world championship, will be represented by the likes of Sébastien Ogier and Jari-Matti Latvala in Volkswagen colours at the Rally Great Britain. When it comes to stage wins, Latvala and Ogier are virtually neck and neck: “JML” has amassed 464, the champion elect has 462.